How censorship works on China’s most popular social network

A new study shows how moderators suppress ideas on Sina Weibo, through systematic blocking of keywords and users.

With a population of a billion people, most of whom seem to be on the Web at any given time, China is the acknowledged champion of online censorship. It’s no small task, combining filtering technology, societal pressure, laws and the threat of imprisonment to keep the riotous Chinese Internet in line.

Now, Rice University, Bowdoin College and the University of New Mexico have released a study that took a detailed look at how the Chinese authorities censor Sina Weibo, the Twitter-like microblogging service that is hugely popular in the country. Weibo has almost 400 million registered users who post about 100 million messages a day.

The findings outlined in “The Velocity of Censorship: High-Fidelity Detection of Microblog Post Deletions” are based on a study of “users likely to participate in sensitive topics” on Weibo.

The research led the study’s authors to a set of hypotheses about how Chinese authorities recognize and delete posts on Weibo, backed up with data from the study. 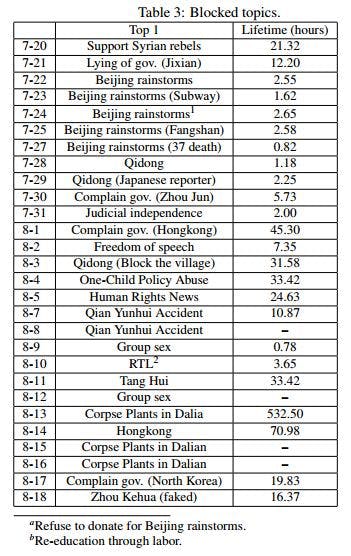 These methods are analogous to what the Chinese authorities do to the Internet as a whole insofar as they cast a wide net and attack the “problem” from a number of different angles. As the authors write, “Our results suggest that Weibo employs a distributed, heterogeneous strategy for censorship that has a great amount of defense-in-depth.”

Based on past patterns of Weibo censorship, this is how the researchers assume the social network’s moderators operate:

Even though it’s nearly impossible to suppress ideas on the Internet, this system manages a pretty close approximation by quickly and efficiently censoring keywords and individual users.

Photo from Sina Weibo via Cronkite