This piece of cardboard is better than your iPhone 5

It raises money for charity, and its battery life is amazing.

When eBay seller Julia McGill put up a piece of cardboard “shaped a bit like an iPhone 5,” potential buyers pushed the bidding up to £200,000. The auction was flagged as a potential scam, however, and McGill is starting over.

It wouldn’t be the first time an elaborate joke has gotten a lot of attention online, but what probably encouraged buyers to put their money on the line for a piece of cardboard is the fact that 100 percent of the auction proceeds go to a good cause.

“All money raised from this auction will go towards a challenge (trekking along the Great Wall of China) I am undertaking for the Charity Dig Deep which is a UK registered charity that helps communities in Kenya improve access to clean water, sanitation and renewable energy,” McGill wrote on Tuesday. 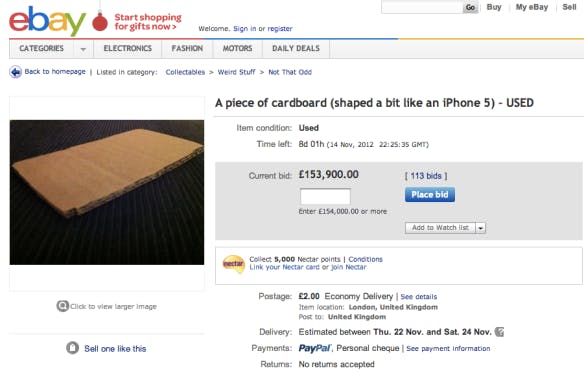 On her sales page, McGill discussed the many merits of her (used) piece of cardboard over the latest Apple product. It’s eco-friendly, its battery lasts forever, and it doesn’t include a glaring screen to hurt your eyes.

More than one hundred and thirteen people bid for the item, and some have left joking comments on McGill’s Question & Answer page:

“You have very little feedback. If I were to make the winning bid, how would I know that you wouldn’t just keep the piece of cardboard and try to fob me off with an iPhone 5.”

(It’s a well-known eBay scam for a seller to claim to offer up the latest tech product, only for the buyer to receive a cardboard replica instead.)

She also added that if people want to donate toward her cause without bidding for cardboard, they can go directly to her fundraising page.

Even though donors on the page aren’t in need of the latest new cardboard slab, many wrote they decided to donate because of the eBay page.

Despite the fact that all the money for the cardboard was going to charity, McGill wrote Wednesday morning that eBay had taken down the original auction, high bid and all.

Apparently, eBay had an issue with McGill’s use of “iPhone 5” to describe a non-iPhone product:

“eBay has removed this item … despite it having raised £200,000 (see screenshot) for charity,” she wrote. A new version of this auction is now available (having removed the offending word iPhone from the title).”

McGill put up a new auction page, but now the bid is only at £16. If you’re interested in raising money for charity and getting a shiny new piece of cardboard at the same time, this is an affordable option—for now.