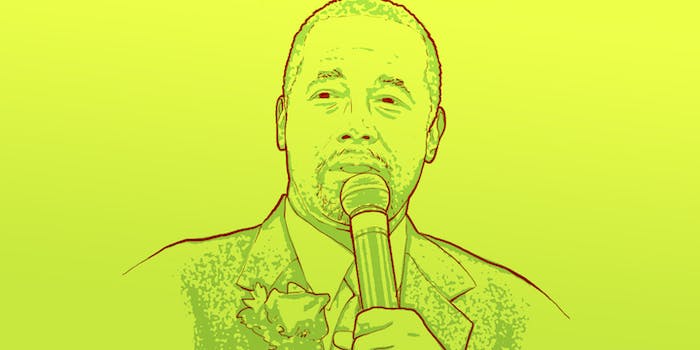 Ben Carson and the problem with blackness

The GOP candidate believes he would truly be the first black president.

Ben Carson, the only black candidate running for president, questioned the blackness of President Barack Obama this week.

“He’s an ‘African’ American. He was, you know, raised white,” Carson told Politico. “I mean, like most Americans, I was proud that we broke the color barrier when he was elected, but…he didn’t grow up like I grew up…Many of his formative years were spent in Indonesia. So, for him to, you know, claim that, you know, he identifies with the experience of black Americans, I think, is a bit of a stretch.”

Carson—who was raised by a black single mother who worked three jobs and from time to time was reliant on government aid—is arguing that his closer proximity to economic hardships and racial oppression makes him a more accurate or legitimate representative of African Americans. According to Carson, he does not need quotation marks around African when referring to himself, and if he became the next resident of 1600 Pennsylvania Avenue he may even regard himself as America’s true first black president.

The absurdity of Carson’s claims are many, and I will get to those, but we need to remember that he has not been the first person to question the legitimacy of Obama’s blackness. During his first presidential run in 2008 plenty of people within the African-American community questioned if Obama truly understood the issues that plague black life in America because his upbringing was more of an anomaly than the norm. And even once Obama placated his detractors, plenty of Americans felt comfortable saying that he wasn’t really black because he was actually half white. Carson’s claims and the similar claims of other Americans have no leg to stand on because they show a profound ignorance of what being black or having blackness truly means in the American context.

Carson speaks about being black and blackness as if it is comparable to the identifiers that Europeans, Africans, Asians and other peoples who were raised in a world that was not ransacked and completely redesigned by colonialism call themselves. But it most certainly is not. Most peoples of the world have been able to organize themselves based upon their own cultural identities. For example, France is called France because the Francs were the dominant group of people in that region. This is how most peoples of the world acquire their names, but this is not how black people in America acquired the name “black.”

When slaves from Africa were brought to America their existing cultural ties were severed. Having slaves that could communicate and organize could be incredibly problematic for a slave owner. Therefore the process of reducing these human beings into slaves and the primary means for perpetuating Southern agrarian industry required an eradication of their African culture. African languages could not be spoken, they had to learn English, learn Christianity, and in many cases a slave owner re-named many of his slaves. Black people in America are not black because they told white Americans that they are black. Black people in America are black because white people told them that they were black.

The process of self-identifying never existed for black Americans, and as a result of this the definition of black that many African Americans use is still based on the parameters that white Americans have always given them. And from the beginning of this definition in the United States, the only qualifier a person needed to be defined as black was the discernible presence of any African traits. The one-drop rule or hypo-descent has always been the American standard. If a white slave owner had a child with a black slave, and that child looked even remotely black then he was entirely black. If an interracial black and white American couple in 2016 has a child who could pass for black then that child will be regarded by American society as a black person. Essentially, you can be half white, 3/4 white, and even 7/8 white, and if you do not appear to be purely white then you are entirely black.

When white Americans defined what “black” was hundreds of years ago these were the parameters and they have stuck to this day. Likewise, being “white” in America meant a total lack of blackness.

The absurdity and irony of this perspective should not be lost on anyone, especially considering that Carson is part of a political party that is overwhelmingly white and struggles to attract minority voters.

For Carson, a true black existence must be one that incorporates economic hardship while also being devoid of significant white or foreign influencers apart from racist oppressors. The fact that Obama was raised by a white family, lived in a foreign country, and did not grow up in the lower 48 states seems to make Obama a lesser version of a black person in Carson’s eyes. The only way to react to these comments is with pity and sadness.

Carson does not understand the cultural ties that bind the black community in America. These ties are simply our physical appearance, and the shared experiences of suffering. Yet this shared suffering does not mean that all black people suffer the same ills—but they do suffer ills that are unique to black people in America. The suffering from 50 years ago is worse than today, and the suffering that black people go through varies depending on where you live in this large and diverse nation, your education level, income and more. The growth of the Black Lives Matter movement and the cries to prevent police brutality show that African Americans receive a unique level of abuse and terror in this nation. When Obama said that he could have been Trayvon Martin, he showed that he understood that certain traumas uniquely befall black communities regardless of our individual stations in life. When Carson said “All Lives Matter” it showed how he did not fully understand the true scope of the problem.

This should not be a competition to see who has suffered the most as a black person, yet Carson seems intent on making it one. It is more so a quest to cope with and understand the universality of the suffering. Carson misses this point entirely. Instead he prefers to fall back on his individual narrative as a modern-day Horatio Alger. He prefers to view the trials and tribulations of life in America along classist divisions and readily overlooks how race could play a role in the inequality. He even admits during the Politico interview that, “maybe, I’m just very non-observant.”

And when discussing the water crisis in Flint, Michigan he had this to say: “If that were going on in an affluent black community, it would have not gone on. A lot of things that people classify as racism is classism, and believe me, there is a lot of classism in our society, and if people of a certain race happen to fall into a lower class, then they get the brunt of it.”

This comment right here in many ways explains Carson’s bizarre and overly simple worldview. Yes, classism is very real in America, but in many circumstances black people did not just “happen to fall into a lower class.” Social structures throughout America made it far easier for black people to take this trajectory. When a group of people based upon the color of their skin have greater obstacles in their way to receiving an education, employment, healthcare, home ownership and on average receive harsher prison sentences than whites, it increases the likelihood that they will have an impoverished existence. If the severity of these obstacles were not so great then rags-to-riches stories like Carson’s would not be so uplifting. Carson comes from a predominantly black and impoverished environment and, according to Carson, he faced overt and severe racism in his youth, but he fails to see how race could have played a role in this environment. Carson’s worldview is so myopic that he overlooks how racism can impact or shape an environment even when he comes from a world dominated by racial injustices and income inequality.

Yes, classism is very real in America, but in many circumstances black people did not just “happen to fall into a lower class.” Social structures throughout America made it far easier for black people to take this trajectory.

The absurdity and irony of this perspective should not be lost on anyone, especially considering that Carson is part of a political party that is overwhelmingly white and struggles to attract minority voters. The fact that the Republican Party fails to attract black voters frustrates him to no end, and he regularly decries how “[progressives] assume because you’re black, you have to think a certain way.”

Yet he also feels entitled to say that a black person has to live through specific instances of suffering and racial oppression the be truly considered black. Carson decries the supposed African American monolith that he claims progressives support, and counters their argument by advocating for a black monolith that models his own experiences and, via the uplifting narratives of his numerous books, could aspire to have the professional success that he has had.

Carson has chartered a path that has seen him escape nearly insurmountable hardship, and rise to the top of his profession, and this is commendable. But black existence in America is not something that a black person can escape due to professional success. Race issues do not transition into class issues once you have become wealthy. Growing up around white Americans and then consciously engaging later in life with the black community that you never had does not make you any less black.

Carson’s ascension to the top of his professional field, and temporarily to the top of GOP, appears to have resulted in him losing touch with certain aspects of black American life. This does not make him any less black, but it does make him disappointing.