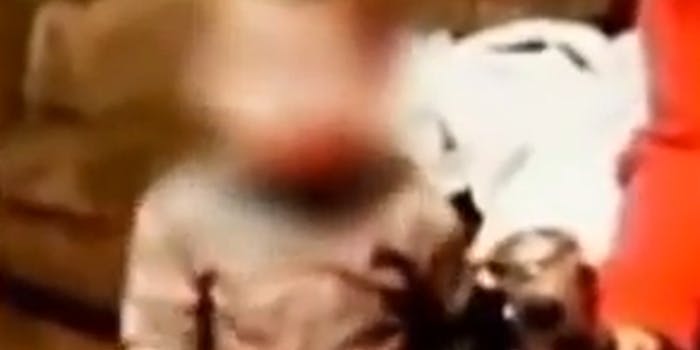 Mom arrested for video that shows her toddler smoking pot

A Seattle-area mother spent the weekend in jail after this video surfaced on YouTube.

A Seattle-area mother spent the weekend in jail after a video surfaced on YouTube that appeared to show the woman’s 22-month-old son smoking marijuana out of a water bong.

Rachelle Braaten, 24, was arrested Friday after police in the Seattle suburb of Centralia came across the incriminating video, which finds Braaten’s youngest child sticking his mouth up to the opening of a bong and appearing to inhale.

The original video has since been deleted, but news reports and mirror copies are currently available.

Police found more than 40 marijuana plants inside of her home, which she shares with her fiancé Tyler Lee and her two children, a 5-year-old and the 22-month-old, and took her into custody. Braaten faces charges of manufacturing marijuana and delivering a controlled substance to a minor.

Her fiancé, who was not in the house at the time, was also arrested and charged with three counts of unlawful possession of a firearm, according to Q13Fox. Seattle’s KOMO reported that Lee also confessed to selling marijuana to a medical marijuana dispensary. Lee was released from prison Monday.

Probed by detectives about the video this weekend, Braaten said that she felt “horrible” about the situation and that it wasn’t at all calculated or effectively considered.

She said that her child came into contact with the bong while a number of friends were over at her house smoking from the bong.

“You can’t see it in the camera, but the person taking it, and then there was like a group of people there. And I guess it was a joke and stupid mistake that wasn’t really funny.”

Certainly not. Bratten remains in custody on $5,000 bond.

As for her two kids, they’ve been taken by child services and placed in protective care. Hopefully nobody in there tried to smuggle in any weed—we hear that stuff’s a gateway drug.