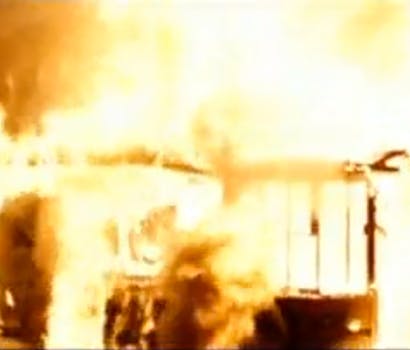 Get laid off? Don’t use Facebook to try to burn down your bosses’ house

A man in North Dakota is in trouble this morning after police learned that he used Facebook to request that someone burn down his old bosses' home.

A man in North Dakota is in trouble this morning after police learned that he used Facebook to request that someone burn down his old bosses’ home.

Fargo, N.D., native Cass Mortensen was fired from his job at O’Leary’s Pub last moth after bosses Michael and Karyl O’Leary, who operate the bar remotely from their home in Mesa, Ariz., discovered that he was lying about the amount of hours he’d worked behind the bar.

Mortenson evidently did not take the firing very well. Two days later, a picture posted on Facebook that found the 35- or 36-year-old man and another former O’Leary’s employee burning a bar T-shirt over an open flame.

According to court records, the post included a message from Mortensen that read “they fired me jefe … can you drive over to Mesa and burn their house down? I’ll give you the address…”

Police report that one of Mortensen’s friends responded to the plea, writing “Cass lemme know the address” a few posts lower in the thread.

The O’Learys are reportedly “terrified” about the idea of their former employee hiring a buddy to burn down their house and have requested that local authorities spend more time patrolling their neighborhood than usual.

Mortensen is charged with a single count of terrorizing, a class C felony in North Dakota, which carries a penalty of between 5 and 10 years in prison.