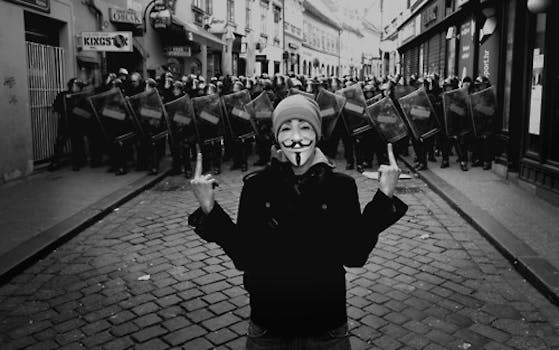 Is Anonymous about to get a new face? Christopher Jordan Dorner, the former LAPD officer now on the run after allegedly shooting three people, is an unlikely inspiration.

Is Anonymous about to get a new face?

Christopher Jordan Dorner, the former LAPD officer now on the run after allegedly shooting three people, is an unlikely inspiration. But then so was Guy Fawkes, Catholic revolutionary and would-be mass-murderer. What they have in common is a frustration unto fury with the Powers That Be, a desperation, and a belief that, as Dorner put it in his manifesto, “The only thing that changes policy and garners attention is death.”

So far, all he has is our attention.

Dorner’s manifesto claims that he was railroaded out of the force after reporting that a fellow officer kicked a mentally ill man in the face, and documents his numerous grievances with the LAPD, beginning with racism and name-calling and ending with the fact that they have, in him, produced the perfect weapon of their own destruction and rendered it inevitable. He gives the impression of a man of firm principles pushed to extremes, rogue cop, an archetypal American character usually played by Bruce Willis, up against the Alan Rickmans of the world. In the lengthy document he gives shout-outs to the Clintons, George H.W. Bush, Michelle Obama (he approves of the bangs), Charlie Sheen, The Chive, and … Anonymous.

YourAnonNews, the pre-eminent Anonymous news account, tweeted, “The FBI will try to use #Anonymous images on Dorner’s FB and words in his manifeto [sic] to discredit us. We didn’t create him. The LAPD did.”

The LAPD has also shot two innocent people, including one woman in her seventies, in the hunt for Dorner.

Despite his apparent murders of three people, Dorner was adopted by many Anons as an avatar of the man of conscience pushed to the point of desperate action. As is typical in a hive as diverse and populous as Anonymous, there have been a spectrum of reactions, with the more prominent accounts carefully making the distinction between supporting Dorner’s stated principles and outright murder.

As part of the actions against the police YAN announced an email bomb of the LAPD (which is simply a lot of emails, nothing explosive), although the list of email addresses targeted appears to have been simply scraped from all public emails on the LAPD site and includes such ephemera as the Royal Canadian Mounted Police Missing Children’s email, and the email address of the public relations representative for the L.A. Dodgers.

YAN also tweeted the traditional “TANGO DOWN,” claiming that Anonymous had taken the LAPD website offline, although I was unable to confirm any downtime and the site works fine at the time of posting. It generally takes longer than a few hours to organize an effective DDoS unless you have a botnet handy. As well, the account is tweeting updates on the pursuit of Dorner. Altogether, these are not actions which could in any way slow down the police pursuit or investigation, but once again, they are excellent optics for Anonymous.

Anonymous has an ongoing #FTP operation, a carry-over from FuckFBIFridays, and the current actions fit neatly under that umbrella and have been tweeted with that hashtag, as well as #OpLastResort. This was the action, formerly OpAngel, inspired by the suicide of Aaron Swartz, and is aimed at reforming the justice system. The OpAngel twitter account has enthusiastically taken up the cause, tweeting, “When people of conscience speak out, this happens: [link] Now you understand why we must exist & do what we do. #opLastResort”