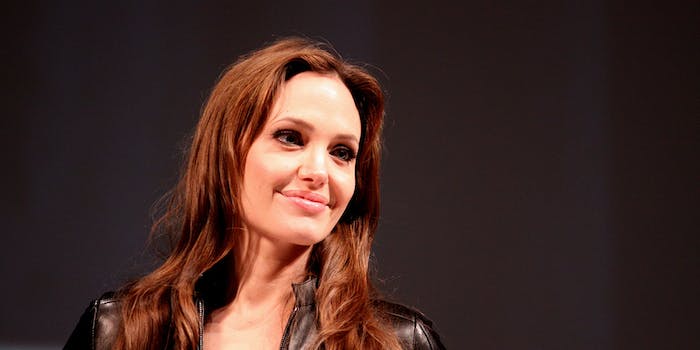 Sexists care more about Angelina Jolie’s breasts than her life

The Internet is more focused on Angelina Jolie's message than on her breasts.

Angelina Jolie is being lauded by many today after openly discussing her decision to have a preventative double mastectomy after discovering she was at high risk of breast cancer. Her honesty in her New York Times op-ed has drawn praise from many quarters.

However, her story has also brought the Internet’s sexists and misogynists crawling out of their dark corners to have their say.

Twitter appeared to have the largest contingent of sexists lamenting the loss of Jolie’s breasts in what is clearly a very sad day for them.

Too bad about Angelina Jolie. She had a nice rack. #cancer

Still speechless over angelina jolie’s choice. That rack is no more……

you gotta feel for Brad Pitt. Marries Angelina Jolie and now she get rid of her rack…. kinda makes her pointless

Angelina jolie is gunna cut off her boobs… Well… Brad pitt is gunna be fucking the nanny.

**BREAKING NEWS** Angelina Jolie has a double mastectomy! “I won’t get cancer now!” the titless bitch went on to say.

A sad day in Hollywood as we did a find farewell to Angelina Jolie’s breasts. Tragically cut down in their prime. Gone too soon. :-(

Elsewhere, a French politician asked if Jolie had the procedure “to look more like men?” Former minister Christine Boutin was criticized for her tweet, with one describing her sarcastically as the “queen of good taste.”

Some redditors shared photos of Jolie with messages such as “RIP Angelina Jolie’s boobs.”

As vitriolic and sexist as some were, many, many more showed support for Jolie and her decision to talk about what she went through.

Reddit had many other discussions in which users were grateful for Jolie’s words.

Angelina Jolie has always been a badass but has never stood more brave and beautiful than tonight. Call your Dr tomorrow lady friends.

What a strong,brave decision by Jolie to decide to have and publicly announce her double mastectomy! SO empowering to women wrldovr! Salute

Much respect & for sharing in classy way: Angelina Jolie on why she had a double mastectomy & how it can save lives: nyti.ms/19l8bbZ

Wow, my complete respect goes to Angelina Jolie. It takes a real brave & courageous woman to do what she did.

A thread about the op-ed hit the front page of Hacker News, and not just because Oscar-winner Jolie was in a movie about hackers. Users had a respectful and reasoned discussion about preventative surgery and Jolie’s efforts to raise awareness.

The comments sections on the New York Times and Reuters Facebook posts about Jolie were largely in praise of her.

Any time someone steps up to discuss an important issue that’s affected them personally, there will always be trolls. But this time, Jolie seems to have drawn more support than criticism for discussing a very personal decision that may help many others.