The unlikeliest ally in the fight against NSA spying

There is much to disagree with about the National Security Agency‘s now thoroughly leaked digital spying program. Take your pick from the dragnet gathering of communication metadata (enough to track your every move) to Congress’s misleading about the true nature of the program. But there is one aspect in particular that should make us bristle with ferocity: not only are we denied knowing the data they gather on us, we are denied knowing how and why they gather it.

We have found a new set of allies in pushing the NSA’s bosses to release more information about the controversial program: tech companies. 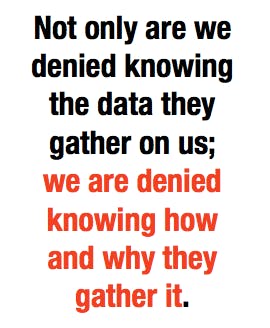 It is understandable that I, a private citizen with no security clearances, do not have access to the data collected by the NSA’s program. I might—and do—strongly disagree with the program on principle, but dealing with policies one disapproves of is part of living in any society. However, what is entirely unacceptable is being blocked from having enough information to intelligently debate the spying program. Between secret courts with secret ruling to State Secrets privileges, the government is preventing citizens—and even policy makers—from having enough information for an informed opinion. Outside of a pell-mell collection of leaked documents, we have no ability to learn about the program. So the debate about whether such a program is something we want as a society has roughly degraded to:

Us: “We oppose the spying program because of X.”

This kind of dialogue is unhelpful in the extreme, to say nothing of unproductive. As a member of this society, I do not have a right to nix any policy or program I disagree with. This is how society works: sometimes I win; sometimes you win. However, what we all have a right to is enough information to make an informed decision about where we stand. 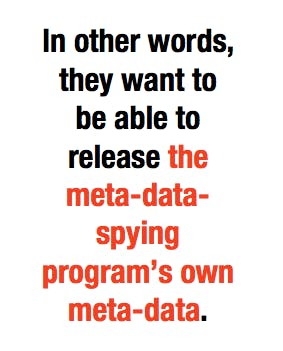 Recently, however, there has been some new hope that this may eventually change. In the last month, a number of technology companies—some of the same companies who have been revealed as providing data to the NSA’s spying program—have come forward, pushing the government to let them reveal how they handle requests for our data. The group, made up of over 60 companies that include Apple, Google, Facebook, and Microsoft, argue that they need more freedom to discuss the extent and nature of government spying requests. In other words, they want to be able to release the meta-data-spying program’s own meta-data.

Last week, Microsoft again called on the U.S. Department of Justice to give permission to talk about its involvement in the NSA program. In the letter, Microsoft made a strong claim for the importance of being able to speak about its participation:

“It’s time to face some obvious facts. Numerous documents are now in the public domain. As a result, there is no longer a compelling government interest in stopping those of us with knowledge from sharing more information, especially when this information is likely to help allay public concerns.”

To be fair, tech companies are likely only partially motivated by altruism. Since the program was revealed participating companies have been slammed daily (and likely in many cases unfairly) for their involvement, and have been almost entirely unable to respond. At the end of the day, these companies have a right to defend themselves—something the gag order placed upon them prevents.

By restricting even basic information about an unprecedented and highly controversial surveillance program, the government is restricting our ability to decide. as a society, if this type of spying is something we want. To have that very necessary debate, we don’t need to see the data collected (although it would help). We do need to see when, why, and how that data is gathered and used. So I say, fight on, Microsoft, fight on.