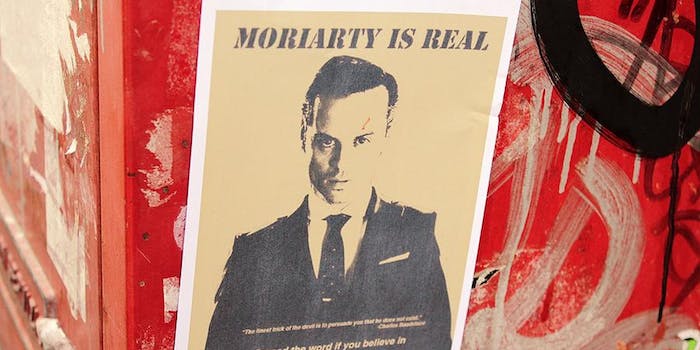 Why I believe in Sherlock Holmes

Fans of the BBC series Sherlock have started a guerrilla-art tribute campaign to the finicky detective, online and on the streets—and it's quickly surrounding us.

Sherlock Holmes is not just a fusty, finicky and fictional Victorian detective. Nor is he merely a Cumberbatchian character in a high-concept BBC series.

He is, according to the Internet, an immortal.

Fans of the incredibly popular series in which Holmes and his sidekick Watson inhabit 21st century London, don’t need to be reminded that—spoiler alert—their beloved Sherlock leaped to his apparent death recently. Oh, but true Sherlock fans know we’ve been here before, haven’t we? When Arthur Conan Doyle killed Holmes off at Reichenbach Falls, it was just an elaborate ruse (the deuce, you say!) before bringing him back in a triumph of publicity and readership.

But online and around the world, Sherlock lives, though he takes many different forms.

He’s also a Google Map, where fans can tag sightings—not sightings of Sherlock, but sightings of signs, graffiti, and street art proclaiming “I Believe in Sherlock Holmes.” As of Thursday morning, there were are about 400 sightings listed on the map, from Greenland to New Zealand, with a mysterious cluster of sightings around the Azores. Likewise, there have been 785 posts on the Tumblr IBelieveInSherlock, which started only two weeks ago.

The producers of the show have been actively engaged online since the beginning, creating websites for both of the main characters. (Holmes, with his static website and somewhat retro forum, seems jealous of Watson’s snazzy blog with its uber-contemporary use of sans serif fonts and negative space.)

But this appears to be a spontaneous uprising by passionate and prolific Internet users, rather than a corporate-driven PR stunt.

Here is the post by Earl Foolish that started it all, back lo, these two weeks agone, calling for a guerrilla-art tribute campaign to show “our love and support” and suggesting several different slogans.

Let’s scribble in bathroom stalls, back of bus seats, lamp posts. I won’t tell anyone to do anything illegal, but graffiti like in the pictures would be amazing. Paint on t-shirts, make buttons, go to the beach and write in the sand. Take photos of what you’ve done, put on twitter or tumblr and tag it! … Using digital media and spray paint is relevant to this chapter of the fandom. Why repeat what the original fandom did, when we can do something that is unique to us?

And they have. I went out for a run along Vancouver’s Seawall and ran smack into a “Believe in Sherlock Holmes” poster and another informing me that “Moriarty is real.”

My god, they have us surrounded.

I have just one question: Where were these people when Tink was fighting for her life?