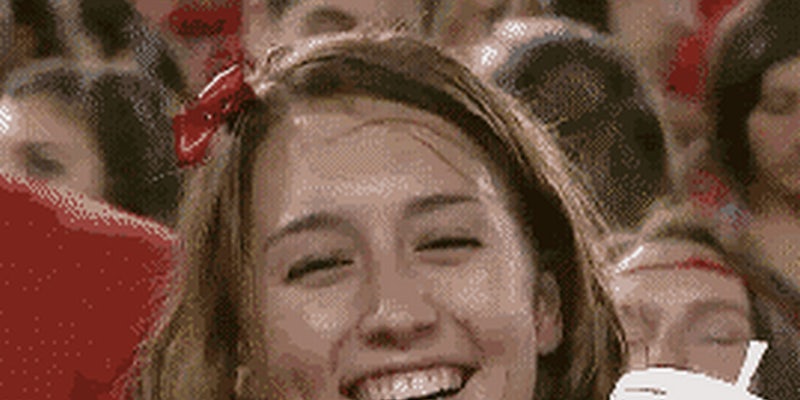 Every day, thousands of users of social news site Reddit deliberately look at—and post—the same GIF over and over again.

It’s another of Reddit’s odd little tics: Thousands of redditors who have subscribed to a subreddit called r/TheStopGirl deliberately look at the same GIF, over and over again, day after day.

Admittedly, it’s not a bad GIF. Also referred to as the “Stop Girl,” the GIF is a common one, taken from ESPN footage at a University of Arizona football game on Sept. 18, 2010. The game’s tied in the fourth quarter when a camera zooms in on a pretty young woman whose concentration is elsewhere. She’s either stressed or zoned out—until she notices a camera, at which point she breaks into a grin and says “Stop!” (There is ample discussion, it should be noted, of whether she actually says “No!”)

No one seems to know the Stop Girl’s identity, but that doesn’t halt the devotion of the subreddit’s 2,826 subscribers. It’s not uncommon for them to post four or five links to the section a day—and all anyone ever posts there is the same image.

To be fair, they mix it up: One user recently posted a link he titled *POTS!*: the GIF, running backwards. Redditor i_am_sad added a loving caption of “please don’t stop” to the familiar image. But otherwise, it’s just repost after repost of the same GIF, though they get creative with titles: since you guys liked my last .GIF so much i decided to post another, What I do at intersections, Every time I consider unsubscribing, When I’m at a televised sports game and the camera man is zooming in on me, and My reaction to discovering a subreddit whose entire purpose is to repost the same exact GIF.

Despite the r/TheStopGirl’s seemingly niche appeal, it’s actually the 229th-fastest growing subreddit on the social news site site, according to statit. In other words, don’t expect r/TheStopGirl’s popularity to halt, slow down, or discontinue anytime soon.