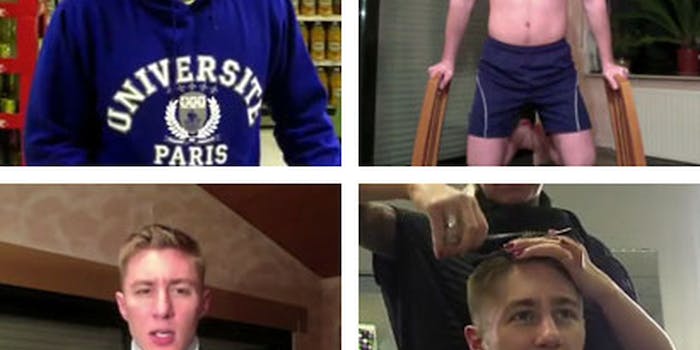 Gay soldier Randy Phillips just knew he had to share his secret. So he turned to YouTube, where he could never take it back.

When Randy Phillips uploaded his first video to YouTube, he knew it would change his life forever—he just didn’t know if it would be for the better or for the worse.

For all of his adult life a secret was barreling down on the 21-year-old soldier that not even his military-provided bulletproof vest could protect him from. It was so detrimental that it could end his career and damage his relationships.

Phillips was gay. And the military had express rules against coming out.

But, the Alabama native decided that he needed to come out—and do it in a way from which “there would be no turning back,” said Phillips in a Skype interview. “It was the easiest way for me to do it.”

“I thought it was easiest just to convey my message through YouTube instead of actually blogging,” he said in his Southern-tinged accent.

Instead of launching a public self-outing campaign like Lt. Dan Choi, another soldier who made headlines for fighting against DADT, Phillips’ came out quietly and gradually.

His folksy demeanor, boyish good looks and social media smarts transformed him into a different kind of Lt. Dan Choi—one for a generation of people reared on YouTube.

He shot his first dozen videos, recorded last spring, neck down to conceal his identity, his voice and hands standing in for facial expressions. The videos were shot in a southwest Asian country that Phillips couldn’t reveal (one of those “hot and sandy ones”), captured a clearly nervous Phillips talking about being gay in the military.

Voice shaking and hand trembling, Phillips’ introduced his then-closeted self to the world last April.

“The whole point of this video is to come out. That’s even hard to say,” he said faintly, warning that his coming out process could take a year.

“I was just nervous, [I had] personal fear, and fear of rejection from my friends and family,” Phillips said without stumbling, a stark contrast from his first videos when his voice sounded like a man about to fly down the tracks of the world’s tallest roller coaster. “I was even nervous of saying the words ‘I’m gay’ period.”

There also were legal issues to consider. Under the military’s policy, “Don’t ask, don’t tell,” which in effect banned gays from openly serving, he was violating the rules. However, he began the videos four months after Obama announced he was repealing the ban.

Investigations were tapering off, Phillips said. But publicly posting coming out videos—while serving overseas—still was a risky thing to do. And the emotional toll of being found out forced him to dart between well-hidden spots to record the videos.

Initially, the videos could only be discovered if someone was looking for a specific subject, such as DADT or one happened to be on Outserve, a private Facebook group for gay military members, where he posted the videos. He credits the members’ support for helping him come out.

“Everybody at that point who had seen my videos …  [gave] me so much emotional support. It was a like a counselor for me.”

In August, however, things started to change. That’s when he posted an unrelated video of one of his fellow soldiers covering Adele’s “Rolling in the Deep.” Suddenly, his quiet channel got a visitor spark. People came to hear the song and then apparently noticed the other videos in his channel.

Phillips wasn’t naive. He knew that any bump in traffic could lead people to see his coming out videos so it didn’t come as a shock to him.

“I put my videos on there and from there they got shared around the Web and passed around, like everything on the Internet,” Phillips said.

After people discovered his channel, an earlier recording of Phillips coming out to his friend, Chris, started pulling in viewers.

With the wind battering his camera during an otherwise ordinary jovial moment, Phillips tells one of his closest friends he’s gay. Instead of freaking out, his friend laughs and says “I could give a rat’s ass…love is love.”

When the camera stopped recording Chris “was like ‘That’s cool, I don’t mind. You are still one of my good friends.’” Phillips recalled.  “He said nothing will ever change and we would still be great friends and that he wouldn’t think of me any differently.”

In September, when DADT was officially lifted, Phillips kept true to his promise: not only did he reveal his identity to his fans on YouTube, he also posted a video of him coming out to his father and showed his face for the first time.

Finally, people could see the worry on his brow and his closely cropped light brown hair with a stylish flip in front .

Sitting at a desk against a map-clad wall, a weary eyed Phillips apprehensively dials his phone to tell him one of the hardest things a gay guy will ever say to his father.

The call takes more than an agonizing minute to connect. Phillips preps his dad for the news. He tells him he has something important to say and then implores: “Will you still love me? Serious?”

Phillips’ voice stammers and he continually looks away from the phone like his father’s disapproving face was peering back at him.

Phillips takes in a deep breath and then finally utters the words: “Dad. I’m gay.”

“OK,” his father says in an detached voice. The video lasts four more minutes. During that time there’s a lot of back and forth. His father maintains his stoic tone, but does say “I will always love you.” The mild-mannered Phillips responds “yes sir.”

The coming out video earned Phillips international press coverage. But he was puzzled why the voyeuristic video grabbed the attention of millions.

“I’m such a boring person. I couldn’t believe that that many people wanted to see something that hundreds and thousands of kids do every single year,” he said. “It was just a conversation on the phone.”

But it obviously meant more to others. The seven minute video has more 57,000 likes and 84,000 comments. Many are supportive of him, but there also are some homophobic haters in the crowd, which doesn’t  bother him.

“Everybody can feel bulletproof behind the safety of their own computer,” he said bluntly.

“A lot of haters are going to click on it and they’re going to feel insecure,” he said. “It’s super easy to make really negative comments, and they did.”

Phillips said the video received between 5,000 and 10,000 hateful comments.

“But its nothing that [haters] haven’t said to my face… I know a lot of people like to vent over the Internet,” he said. He also shoots down critics who said Phillips released the video just for attention.

“I don’t think that many people realize how YouTube helped me, and how it pushed me. How grateful I was that I get to share my story and show people what the average reaction would be…and that life gets so much better after that.”

He admitted that the videos of him coming out to his father, and later, his mom who didn’t take the news as well, had an “ambush” aspect to them since he didn’t ask for their permission to broadcast them. (That charge came from an article in Salon who lambasted Phillips’ choice of doing this.)

“Maybe,” Phillips said. “I am not going to argue with that 100 percent. I don’t think either of my parents, if I were to ask them, ‘Hey, is it OK if I put this on the Internet?’, I don’t think they anybody would’ve said ‘yeah, go ahead.’”

“I explained to my parents about how much I owe that to the YouTube community and how many emails [he received]” that he forwarded to his parents including one who came out to his parents at 34-years-old thanks to Phillips’ video.

Although his relationship with his very conservative Southern parents remains at arm’s length (“They wouldn’t go out of their way to ask me how everything is going…but they don’t mind”), the support from the YouTube community helped him.

“I think my parents now understand that they helped more people than they thought they ever would,” Phillips said. Reaction to the video from the Air Force was also supportive. “Not one single person came up to me and said something negative,” he said.

Following the coming out videos, Phillips altered the direction of his channel from less of a gritty account of his personal life, to a mix of light-hearted videos. His channel pivoted from closely resembling the front section of a news weekly to the glossy style of Men’s Health with its mix of workout videos and travel diaries.

He has more than 36,000 subscribers and 11 million total video views. The support he received from his emotional videos helped him keep his channel up and running.

“I am going to film whatever I want to from now on, I have absolutely no push to go in any direction whatsoever,” Phillips said confidently. Also, he wants to evolve past being known as the ‘gay soldier,’ and to show the world there is more to him than that.

“I want to show everyone out there in the YouTube world that I am a plain, boring, normal guy and that being gay is just a part of me,” Phillips asserted. “I am not trying to make a career out of it. I’ve said everything that I need to say as far as coming out.”

Showing off indeed. The boyish, but built, Phillips is often times shirtless. “I’m from Alabama, I’ve been shirtless more of my life than I’ve been clothed, so whatever,” he joked. But clearly the lack of attire doesn’t hurt when it comes to gaining an audience.

Phillips’ videos are fun, candid and usually last under five minutes. The lighting and sound don’t mirror a pseudo-professional production like other YouTube channels. The videos do show off Phillip’s down-to-earth, approachable, friendly side.

Viewers are treated to a glimpse of military life that not even CNN could provide. We follow him to the grocery store, watch him as he teaches us how to build stronger triceps and he occasionally does an unscripted question and answer sessions that he pulls from 10,000 follower strong Twitter account.

It takes him only about 25 minutes to shoot and edit a video, and he says a only a few of his coworkers follow along. “One of my coworkers’ wives is my biggest fan,” he laughed.

The Air Force does not supervise what Phillips uploads but their code of conduct prohibits him from dabbling into anything political and he has to clearly assert that whatever views he provides are of his own.

Although his videos are pretty genial, he’s aware when he crosses a line. Earlier this month, he posted, and then quickly pulled, a video of him flexing just in his underwear tweeting “I think that video was just a little [too] much.”

His fans, however, continue to be supportive and probably won’t think he would ever go “too far.” A search for @AreYouSuprised on Twitter reveals some rabid fans that Phillips takes in stride.

“It’s funny, I take it pretty light-heatedly,” he laughed.

“I think its amazing that I had such so more of a choice then I would, and there is no reason for it. There is nothing that I have ever done that’s crazy. I’ve never been much of an activist, I just shared my personal story.”