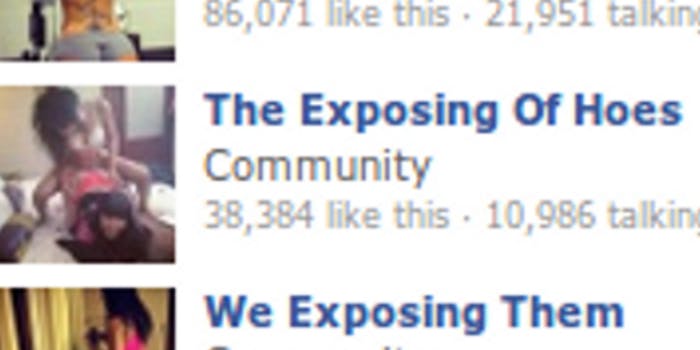 Creepshots are going local. Police in the sleepy Pennsylvania town of Easton are scrambling to figure out who ran a Facebook page called "Exposing Easton."

Police in the sleepy Pennsylvania town of Easton are scrambling to figure out who ran a Facebook page called “Exposing Easton,” where 1,500 people ogled, “liked,” and dissected pictures of local women. Accompanying the photos were the women’s real names, as well as explicit details of their supposed sexual encounters with the page owner. Many looked very young, even teenage. Some of the raunchy messages identified one of the girls as a minor. It’s likely none of them consented to their photograph being shared online.

The photos spawned long comment threads where subscribers debated whether the “Exposing Easton” owner had really slept with the women. That was more important than reporting the page to Facebook, apparently, which was all anyone needed to do to get it removed. The company deleted the page on Monday, shortly after enquiries from Zach Lindsey, a reporter at The Express Times, the local newspaper.

The case has echoes of a national debate that began last year, when high-powered Web community Reddit became a focal point of controversy thanks to a forum called r/creepshots. There, thousands of strangers hornily devoured surreptitiously snapped photographs of girls and women, many of whom were out in public (or in a high school classroom) at the time and had no idea creeps on a pseudonymous forum were using them as masturbation fodder. It was a nightmare harassment scenario—you could go out for walk, and within minutes have your photograph pop up on the monitors of 10,000 pervy strangers. The forum shut down in October, but versions still persist under different names.

A local Facebook page is even more imminently threatening than a pseudonymous Reddit forum. Easton sits in Pennsylvania’s Lehigh Valley, about 70 miles west of New York City, and has a humble population of about 28,000. It’s likely many of Exposing Easton’s subscribers actually knew the women in the photographs. When the creepshots pages shut down, others sprout up to replace them. Exposing Easton, in fact, was simply a replacement for “Exposing Easton Sluts,” which Facebook had earlier deleted.

“Every couple of months this is coming up, and it’s the same thing,” a local police officer told The Express Times. And that’s just in little ol’ Easton. How many similar pages exist for other cities and towns? Here’s one in Greenville, Mississippi, that’s been harassing women for seven months. The trend doesn’t stop at U.S. borders, either. At “Malindi Sluts Exposed,” admins brag about their popularity as they name and slut-shame Kenyan women to an audience of 1,000.