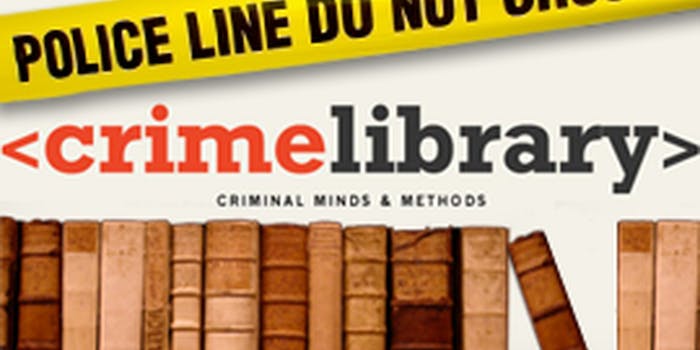 Even on the Internet, investigating violent crime can take its toll.

“Grandmother Accused of Running Toddler Over With SUV.”  “Man Shares Childhood Memory of Seeing Someone Get Shot in the Head.” “Brazil’s Alleged Cannibal Trio Killed Women in Rituals and Sold Pies Made With Their Flesh.”

For nearly 15 years, one website has been serving up the dregs of the miserable and the macabre in easily digestible, pithily headlined format. With thousands of catalogued information relating to crimes large and small, appalling and bizarre, Crime Library has succeeded for 15 years on a premise that mystery lovers, journalists, and true crime aficionados all know too well: Crime is entertaining.

But as its founder and former executive editor, Marilyn Bardsley, knows all too well, even on the Internet, investigating violent crime can take its toll.

Created in 1998 by Bardsley when she was still just an Internet marketing executive who “didn’t know anything about crime,” Crime Library was immediately popular for its well-researched articles and the nonclinical tone with which it described gruesome and shocking real-life crimes throughout history. Bardsley, who wrote many of the early articles on the site, hired professional crime writers to expand the site’s library, including expert forensic psychologist Dr. Katherine Ramsland and crime writer Gary C. King. In 2001, CourtTV bought the site as part of the growing family of Turner Network websites. In 2008, CourtTV became TruTV. Today, Alexa ranks the site among the top 2,000 websites in the U.S.

Crime Library is an epic, chilling time-suck, with article after gory article leading to a vortex of oft-salacious details. Earlier this month, one popular article on the site was a stomach-churning one-pager, complete with photos, that we probably can’t describe without needing a warning for gore. If reading isn’t your forte, the site has photo galleries, everything from weird crimes including real-life vampirism and zombie attacks to criminal histories and famous crime scenes.

“When I started the Crime Library in 1998, I made a list of all the cases we simply HAD to include,” Bardsley told the Daily Dot. “They numbered 86. Almost all of them were household names—like Ted Bundy, Jeff Dahmer, Jack the Ripper, etc.—and all were well known like Bonnie & Clyde, the Mafia crime families, bin Laden, Carlos the Jackal, etc.”

Bardsley made an effort to cover stories about other aspects of criminal interests in order to give the site more depth— “stories on organized crime, art forgery, scams and heists, the trials of Jesus, the Shroud of Turin, whether or not Napoleon was murdered, the origin of the Miranda law.” She soon learned, however, that the audience’s interest lay in the opposite direction.

“These stories that gave breadth to the library were hardly ever read,” she said. “Consistently for the decade that I managed it, the top traffic was always from the same well-known serial killers (Jack the Ripper, Bundy, Dahmer, Gacy, Gein, etc), Al Capone and Charles Manson. Overwhelmingly the top sections for traffic were first, Serial Killers, and second, Notorious Murders. Some of these stories are the true-life equivalent of a horror show.”

With so much readily available material to peruse, it’s sometimes worryingly easy to forget that each of the stories on the site are about real people—many of whom are awaiting trial for their crimes even as the articles were being compiled. Victims’ families sometimes read the site along with the rest of us—as Bardsley learned in an early, horrifying wake-up call:

“For the most part, in the first couple years of Crime Library I was really an armchair historian until I got an email message that knocked me for a loop,” she recalled.

“On our list of stories that we listed [as] future stories was the name Westley Allan Dodd. I had no idea who he was and there was nothing at that time in those early days of websites about this man. All I knew was that a number of readers wanted a story about him. The author of the email insisted that I send him the story before it was published. My first thought was ‘hell no!’ But instead I wrote back and asked the author of the email what his interest was in that case: Was he one of the cops or defense lawyers? He quickly wrote back that he was the father of 4-year old boy Lee Iseli who was stalked, tortured, and murdered by this friend. I was horrified. I had never really thought about a crime so evil. It’s one thing to write about Pretty Boy Floyd and Al Capone, but a child killer! It was my baptism by fire as to the real crime world.”

Due to the awful nature of many crimes, including Dodd’s, Crime Library has strict rules about what kinds of photos it does and does not publish.

“Years later, when I had lunch with Dr. Robert Keppel, who was a key part of the Green River task force in Washington state, he told me that Dodd had taken photos and video footage of his torture and murder of that poor child and that the father did not want me to put those photos on the Internet,” Bardsley said. “I can’t imagine that I ever would do so.

“Our policy with photos was to use photos of victims that were family snapshots or yearbook photos or portraits. I can only think of three times I put death scene photos in the hundreds of Crime Library stories: 1) the blurry photo of Jack the Ripper’s last victim, Mary Kelly; 2) the shooting of mob boss Paul Castellano; and 3) the dead body of Bugsy Siegel. I deliberately put the deaths of the mob boss photos in Crime Library because I wanted any little snot who thought being a mob boss was cool to see how that career is ended.”

When asked how she felt Crime Library struck the balance between documentation and entertainment, Bardsley explained that CourtTV had taken this challenge very seriously early on. Their original goal, she stated, was to address “a large segment of the public’s (80 to 85 percent female) interest in true crime.”

“We did a number of focus groups to get a better idea of what the audience found interesting and why,” she said. “Women and children are often victims of crime and that was often cited as a reason for their intense interest, especially in serial killers and their unique personalities. The men in the focus groups tended to be most interested in the psychology of criminals and the police procedures for ensnaring them, although they frequently mentioned that they wanted to understand criminals better so they could protect their girlfriends, wives, children, elderly parents.”

Bardsley added that there could be another, “rarely mentioned” reason for the public’s fascination with true crime—the intense emotional experience of a violent crime, without any of the real-life horror.

“Most people, thankfully, have fairly routine lives, not traumatized by violent crime: They go to work, take care of the family, and then watch TV or read and go to bed,” she said.

“Reading about violent crime or watching stories about it on the news gives them an emotional intensity boost without having to experience the emotion in the lives of their family and friends—whether it be horror, sadness over the tragedy of a murdered child or wife, and joy when the criminal is caught and punished. Or in the Casey Anthony case, unmitigated anger. Take a look on Twitter and see how many women have in their handles or profiles some message of hatred for Casey Anthony. And then there was OJ Simpson, JonBenet, Anna Nicole Smith, Natalie Holloway, and so forth. People really get glued to these cases and become obsessed with them.”

And on the other end of Crime Library’s servers are the writers of true crime, who have to live with these stories every day. Bardsley, who is still listed as Crime Library’s executive editor but is no longer as involved in the site’s management, explained to us that sometimes, the ones who work with these stories have to detach for their own good.

In the late summer of 2005, I made a decision to increase our traffic by taking a select group of our authors to do breaking crime news that we could investigate. I think those stories have generally been removed from Crime Library. The first case was a missing 17-year old girl, Taylor Behl, who vanished Labor Day at Virginia Commonwealth University in Richmond. My husband and I were on our sailboat, docked on the Chesapeake Bay. We jumped in the car and drove to Richmond to investigate. In parallel, I hired a blogger named Steve Huff to penetrate the many Myspace accounts this girl, the man who killed her, and her friends had. We were miles ahead of the police and the media and I was interviewing on all the major networks about what we learned. I had the very sad experience of visiting her casket in the funeral home on her 18th birthday.

Another case I personally became involved in was the murder of a 6-year-old by a family of perverts (mom, dad, adult son) who raped and murdered the child. My investigation was used by the prosecutors of these monsters. Also, I had author Chuck Hustmyre chase down the case of wealthy Alex Midyette who beat to death his infant son in Boulder, Colo., while his law school graduate wife wrapped herself in denial.

The reason I don’t do this stuff any more is that it [is] unbelievably depressing. I simply will not deal with real cases created by monsters and psychopaths. Life is too short. I’ve done my time on cases like that.

After finding success with her Crimescape true crime venture with Rosetta Books, Barsley has directed her focus to penning her first crime fiction series. Yet, her story of Crime Library’s founding reminds us that behind the horror stories are real lives, real people, and real pain.

And if it seems like a website with little room for sincerity, much less sentiment, Bardsley’s simple acknowledgment that she had to walk away says all that can be said about the toll this form of “entertainment” can take.