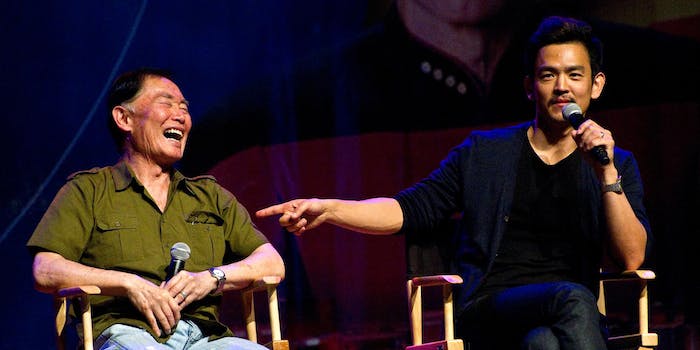 How much would you pay to have lunch with two Sulus at once?

Star Trek reboot actor John Cho is banking you’d pay at least $25 for the opportunity to have lunch with him and original Sulu, the Internet’s own George Takei. That’s the idea behind Cho’s challenge to raise money for the University of California (UC)’s Promise for Education campaign, which started in September as a six-week challenge to fund undergraduate scholarships.

For a donation of $25, Cho, who graduated from UC Berkeley with an English degree before becoming an actor, pledges to select one random donor and take them out to lunch with him and Takei.

Amazingly, even though Cho’s challenge goal is set at a modest $5,000, so far he has only 77 donors. perhaps because he’s yet to publicized the campaign on Twitter.

The UC campaign uses a crowdfunding model where instead of offering projects, proposals make their donors various promises, both great and small. These include everything from a vow to sing a song in public to volunteering to mentor a STEM student through their entire school career.  Mike Love of the Beach Boys is offering to choose a random donor to sing a song with him.

Although a glance through the listings shows that most of the promise campaigns have gotten little if any love—certainly not the kind that many Kickstarter and Indiegogo campaigns get—the crowdfunding method has already yielded over $1 million for UC undergraduate students. Given the current transitional state of budgeting for California public schools, the campaign’s success could pave the way for similar nontraditional ways of funding public education.

The UC campaign has five days left—plenty of time to put your name in the pot for a chance at sitting down with the two Star Trek icons. And it’s not too late to start a project of your own.