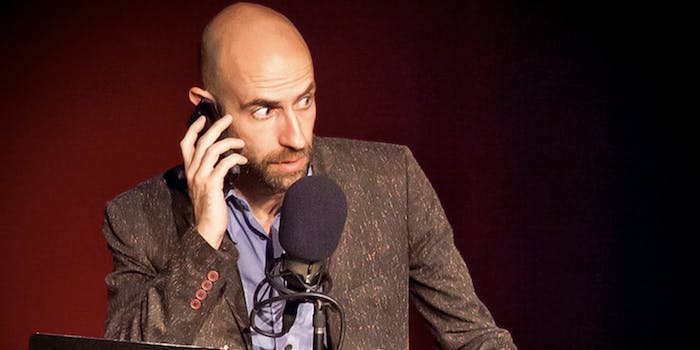 Fans of the hit podcasts Welcome to Night Vale  and The Thrilling Adventure Hour are in for a treat: the two shows are combining to do a joint cross-over event in conjunction with Emerald City Comic Con in March.

The two shows will hit Seattle on Saturday, March 29, where the Moore Theatre will be hosting Thrilling Adventure Hour creators the WorkJuice Players and Night Vale’s lead actor and narrator, Cecil Baldwin.

“We are enormous fans of Welcome to Night Vale and are excited to combine forces with them. We’re planning some fun, silly, scary, spooky doings for everyone to see and hear and also feel. Most gratifying for us is the coming together of like minds who like to like each other.”

The two shows will also be appearing at Emerald City Comicon the weekend of March 28-30. Three-day badge-holders can take in a night of exclusive programming from the two groups, featuring a Night Vale live performance and a screening of the Kickstarter-backed Thrilling Adventure Hour Concert Film.

Though the two shows are slightly different in tone, it’s easy to see why they’d combine well— apart from their podcast format. Both shows harken back to radio shows of bygone eras. Thrilling Adventure Hour is a staged radio show and podcast on the Nerdist network in which a host of guest stars perform genre-based comedy segments. Night Vale, by writers Joseph Fink and Jeffrey Cranor, enacts the vintage feel of a sleepy small-town radio station (if the station was broadcasting from within the Twilight Zone).

Both shows have also enjoyed phenomenal success for podcasts: In 2012, the Thrilling Adventure Hour Kickstarter raised almost $200,000, enough to fund the concert film as well as a graphic novel released at last year’s San Diego Comic-Con. Night Vale has meanwhile enjoyed a run of sold-out tour dates on both coasts, and recently announced a book deal for a 2015 novel.

So far, it looks like this year will be even better for the two shows—and especially the fans who love them both.