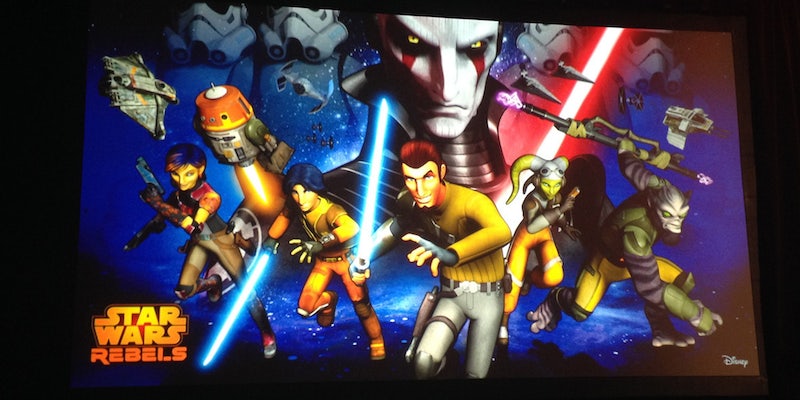 Where are the women in ‘Star Wars: Rebels’?

The new Star Wars series features 2 major female characters, but you wouldn't know it from the marketing.

Over the last few weeks, Disney and Lucasfilm have been revealing major character details for their new animated series Star Wars: Rebels. On Monday, two new teaser trailers showing the first footage from the series were shared online and on Disney XD, where Rebels will air this fall. The trailers recall the feeling of the original trilogy and have excited many fans, but they also highlighted a notable absence in the information being released so far.

Where are the women?

While it’s been known for sometime that there will be two female leads as part of the ensemble cast, detailed information about them has yet to be revealed. The name of one of the women, a Twi’lek named Hera, was discovered when LEGO announced its Rebels line last week. The second woman, a Mandalorian named Sabine, was only spotted with her helmet off at this week’s New York Toy Fair. Both characters also appeared on character cards for a dice game revealed at the fair.

Four character trailers have been released for the show in addition to the teasers, but they’ve focused on three men, humans Kanan and Ezra, and alien Zeb, and a droid named Chopper. In the two teaser trailers, viewers only get a brief glimpse of Hera at the end of each.

The absence of any background or other information about the two women seems like a major departure from Lucasfilm’s previous animated series, Star Wars: The Clone Wars. One of the show’s most beloved characters, Ahsoka Tano, was a strong female Jedi. It marked the first time such a character took front and center onscreen for the franchise. Ahsoka was voiced by actress and entrepreneur Ashley Eckstein, who has since launched a geek clothing line for women and been a major supporter for showing that female fans of sci-fi exist. Yet it suddenly appears that female characters are getting the back seat compared to their male counterparts.

The biggest uproar among fans resulted when none of the women appeared in Hasbro’s initial wave of Rebels action figures. Fans took to the Internet to voice their displeasure. Jason Ward of Making Star Wars wrote a blog post titled “Hasbro: Star Wars is forever and Star Wars is for everyone! Do not exclude women!” about how problematic it is to exclude female action figures. This post actually prompted a response from Hasbro, in which they revealed female action figures would eventually be released, but there was still disappointment that at least one woman was not included in the first wave.

Remind me again how long we’re waiting for the #StarWarsRebels toys that include women?

I am happy that @HasbroNews heard us today! Small victories but this is a much bigger problem and we will fight the fight #starwarsgirls

So, no female characters from #StarWarsRebels in Hasbro’s first wave of figures from the series. I’m utterly shocked.

It’s nice that they are indeed going to make the #StarWarRebels ladies into action figures, but that is ANYTHING but a given these days.

While female figures are coming, Disney seems focused on promoting the series’ toys to boys in particular. A press release from Disney Monday was titled “Disney Consumer Products Ready To Capture Boys’ Imaginations and Dominate Toy Aisles in 2014” and it claims that Rebels products, along with Marvel lines, “will dominate boys’ toy aisles.”

It will be disappointing if this new series decides to focus less on its female fanbase. Ahsoka served as a great role model for girls and was one of the reasons Clone Wars fans were so disappointed when the series was canceled. There are clearly fans excited for news of the characters as well, with fan art already appearing online.

If these characters are truly going to be leads on the same level as the male members of the cast, then why aren’t they promoted in this first wave of marketing as well? It leads to the larger debate over areas like sci-fi and video games being stereotyped as being for boys and thus only marketed to them, but hopefully after seeing the possibilities for girls through The Clone Wars this isn’t where Disney decides to take Lucasfilm and Star Wars.

Lucasfilm did not respond to a request for comment by time of publication.

Photo by Lucas Siegel via Newsarama