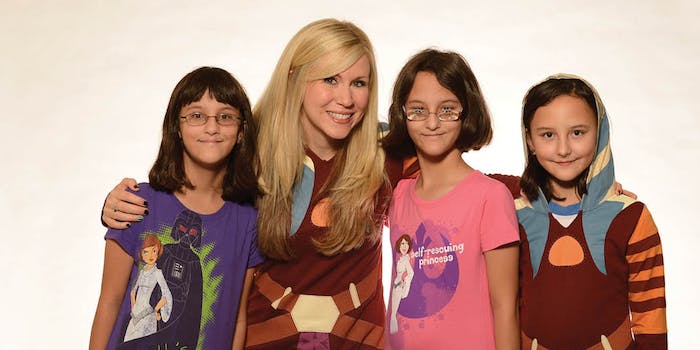 “Star Wars” actress declares 2013 the Year of the Fangirl

One day at a time,  Ashley Eckstein's Her Universe is helping spotlight the fashion and diversity of geek girls.

That’s the bar set by actress Ashley Eckstein, whose three-year-old geek fashion company, Her Universe, has been profiling a different fangirl every day since February

“I knew we have a major stereotype to debunk especially in science fiction and fantasy, because many believe these genres are just for men and boys but the statistics prove otherwise,” Eckstein told the Daily Dot. “They prove that close to half of science fiction fans are women. This is a genre for everyone.”

The entrepreneur, who voiced Jedi padawan Ahsoka Tano on Cartoon Network’s Star Wars: The Clone Wars, wants her campaign, dubbed Year of the Fangirl, to celebrate the everyday fangirl and share stories of women from around the world.

“I’ve always tried to grow the community and encourage girls to step into the spotlight and say ‘hey, I’m a science fiction fan’ because for so long a fear of bullying or being made fun of prevented girls from talking about it,” Eckstein said.

Anyone can nominate a “Fangirl of the Day.” You can even nominate yourself. At first Eckstein was nervous about committing to spotlight a girl every day but that quickly evaporated when the nominations began pouring in.

“The response has been absolutely incredible,” she said.

As of mid-April Eckstein has received over 500 nominations—and they keep coming. Helping her with the campaign is a group of five contributors, who are spreading the campaign’s message and looking for more fangirls to nominate. Eckstein calls each of their stories “inspiring.”

Contributor Victoria Schmidt, a veteran cosplayer and cofounder of the geek style blog Set to Stunning, is glad that the campaign is bringing together girls of all ages from around the world and said one of the best things Year of the Fangirl has done “is show girls they’re not alone.” 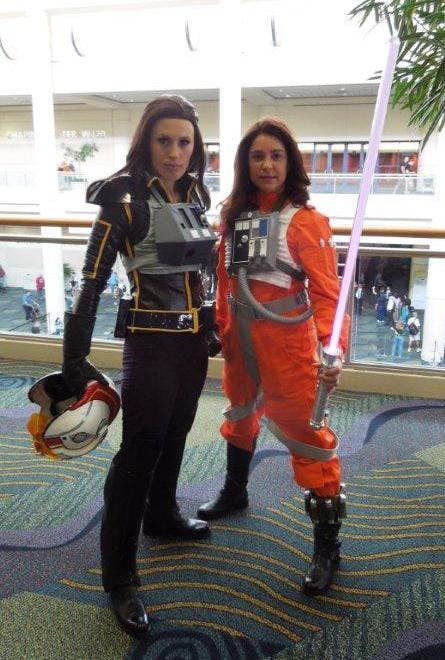 “I see so many girls thinking that they were the only ones who loved this or that, and how alone they felt because they couldn’t find like-minded people near them,” Schmidt said. “But now they know there are other girls just like them, with their same passions, ready to geek out with them!”

Fellow contributor Tricia Barr,  a professional engineer, thinks the campaign’s message is spreading among the fangirl community on on Facebook and Twitter, where the crew often engages them to hear what they think of products and what they’d like to see in the future. Eckstein hopes to expand the community on Pinterest and Instagram soon as well.

“We’ve really seen growth in our fangirl community since we started and seen more girls step into the spotlight,” Eckstein said.

“We need to grow up from the stereotype of a geek being just a teenage boy, or some 30-year old man living in his parents’ basement,” Schmidt added. “ Geek girls, just like geek guys, come from all walks of life, and in all shapes and sizes, and being randomly blessed with good looks shouldn’t blacklist you as someone who couldn’t possibly be a geek.” 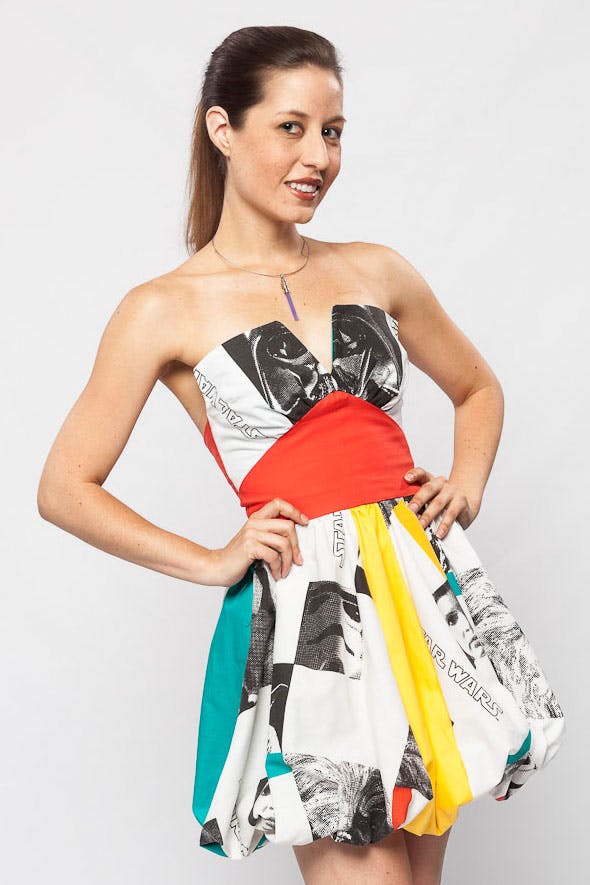 Eckstein believes the campaign is “vital at a time like this to proudly and strongly illustrate how massive and varied the fangirl community” is and that “there is no standard to what a geek girl is, or what they look like.” Barr added that the growing strength and visibility of the community is encouraging women to speak up now when they are faced with sexism and exclusion in geek culture, pointing to the recent Tomb Raider cosplayer harassment incident as an example.

“Those cosplayers spoke up not just for themselves but for the girls coming after them too,” Barr noted.  “They didn’t want anyone else to have to go through that. Now with a more vocal community, women can speak up and say ‘no that’s not appropriate’ and sort of redefine what’s appropriate.”

Eckstein has experienced doubts about her own geek girl cred fairly recently. When she wrote a blog post for StarWars.com encouraging fans to vote for Ahsoka during their March Madness bracket, one commenter named DarthMRN stated, “I have not yet decided if I think Ashley is simply milking her SW gig for all it is worth, or if she is actually the degree of fan she appears to be.” 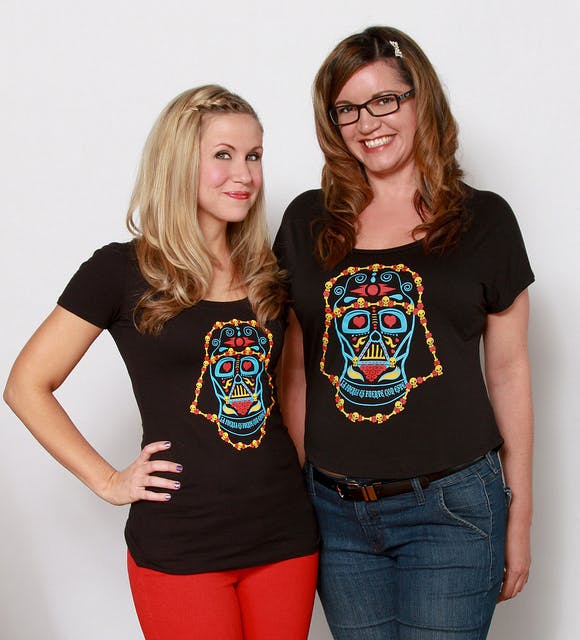 Other commenters quickly rose to Eckstein’s defense, for which she was thankful.

“It is sad that a part of me feels if I was a guy that comment would not have been said, but because I’m a girl I have to prove my right to be there,” she said. “Why do we [women] have to prove that we belong?”

Eckstein said she feels the issue isn’t even worth the time to debate and focuses more on the positive work of growing her community and gaining them recognition. Since Her Universe was founded, Eckstein has certainly convinced a number of companies that female fans, and thus consumers, of geek products exist.

When Lucasfilm asked her in the beginning what made Her Universe different, since the company had tried female merchandise and failed to sell it in the past, Eckstein stressed that it would be her interaction with fans and the growth of the fangirl community. Her sales have been convincing enough so far that she’s expanded her Lucasfilm licensing beyond clothing to include jewelry. Her products are also sold now at the Star Tours ride in Walt Disney World.

“I asked fans to go to Hot Topic and buy our items there to make a statement to them and say ‘look, fangirls are here and they will buy products if you give them to us.’ It wasn’t buying to just support our brand, it was to support the [fangirl] movement,” she said. “If you want to walk into a retail store and see [geek fashion] for women we need to speak up about it.” 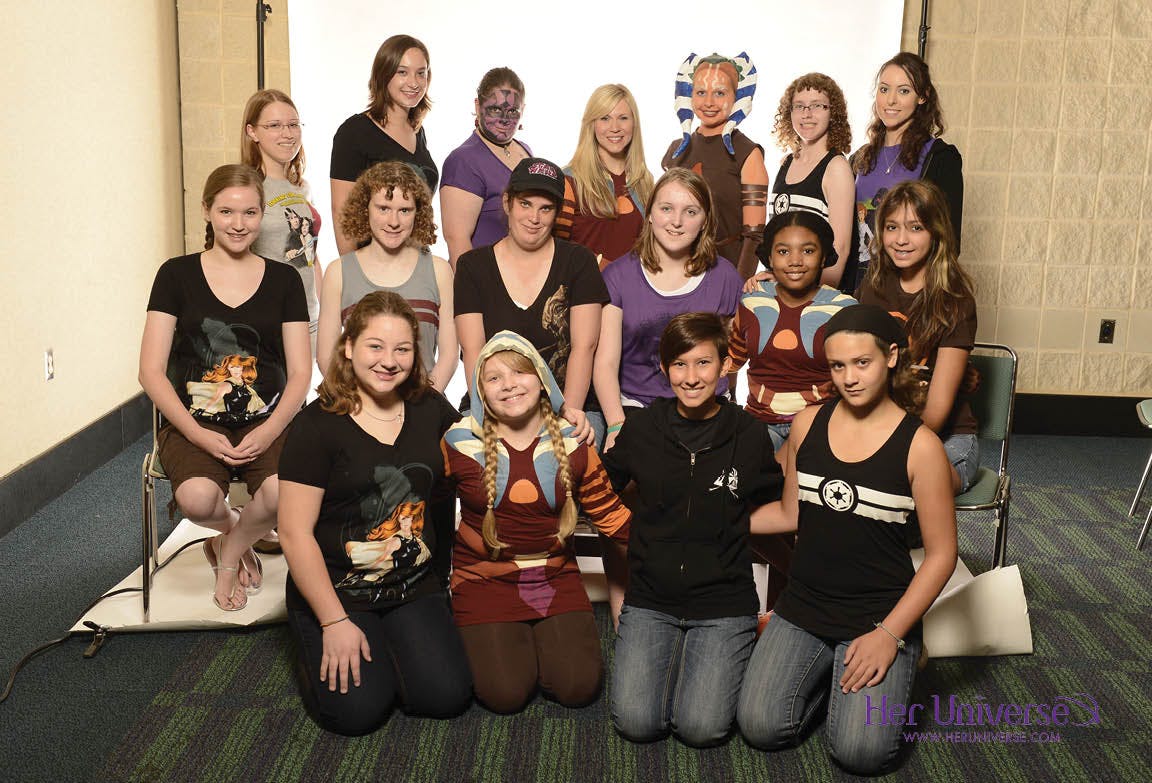 After, selling out all of Eckstein’s items on Hot Topic’s website, the company has since sold Her Universe products year round and been the site for some of its new product launches. These successes show not only Eckstein’s business skills but also her ongoing commitment to creating the supportive community she hopes to expand with the Year of the Fangirl.

“This campaign is going to grow and make the fangirl community stronger, and I think it’s really going to help make the geeky community aware how many, many, many fangirls there actually are!” Schmidt said.

While there’s a clear end date for the campaign, Eckstein hopes to carry the momentum well beyond 2013.

“This is just the beginning.”