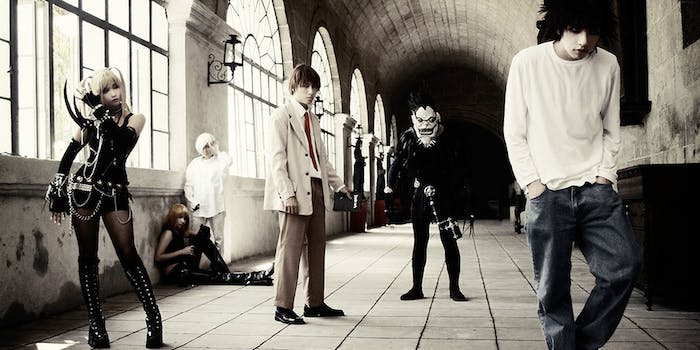 45 years of ‘Shonen Jump,’ the Japanese magazine that shaped your childhood

Celebrating the 45th anniversary of the magazine that gave us Naruto, Death Note, and more.

This year may have been the 20th anniversary of Otakon, one of the longest-running and largest anime conventions on the East Coast; but one of the con’s many panels dealing with Japanese culture and history celebrated an even more esteemed anniversary: the 45th year of Shonen Jump.

Shonen Jump, alternately referred to as Shounen Jump or just Jump, is one of Japan’s longest-running publishers of serial comics—manga—but it’s so much more than that.

Jump is one of the mainstays of Japanese culture, and it has turned “shonen sports manga,” or comics about boys discovering sports, into a specific genre with its own conventions, tropes, and codes. Four of its current most popular titles, Bleach, One Piece, Naruto, and Hunter x Hunter, have been running for more than a decade, and many of its titles throughout the decades have not only heavily influenced manga culture, but found their way to audiences overseas as well.

Shonen Jump is a weekly manga magazine designed to appeal to boys; yet with a current weekly readership of 3 million, and more outside Japan, plenty of girls and adults read too. And as you’ll see, classifying something as “Shonen” just because it’s in an issue of Shonen Jump by no means indicates that it doesn’t contain adult content.

An unusually high number of the manga titles published in Jump go on to become popular anime. Chances are that if you’re watching anime where a young boy receives special powers (Dragonball Z, Bleach, Death Note), is fighting to become a member of a team or competitive sport (Slam Dunk, Prince of Tennis, Hikaru no Go), or both at once (Naruto), then that anime began its life as a Shonen Jump manga.

At Otakon, panel presenter George Horvath, of the anime blog Land of Obscusion, was thrilled at both the packed house and the level of enthusiasm that the audience had for the presentation.

His choice to present the opening theme tunes from each anime was an interactive one, as he noted on his blog Monday:

When the crowd collectively screamed “You wa Shock!” alongside “Ai wo Torimodose”, sang “Saint Seiya!” during “Pegasus Fantasy”, & even indulged me by spelling out “B-A-K-A-S-U-R-V-I-V-O-R” during Bobobo’s “Baka Survivor” I truly felt something that I never felt before: I truly felt like I was a panelist that was bringing something anime fans loved & wanted to see.

Here are some of the highlights from Horvath’s panel, and the last 45 years of Weekly Shonen Jump.

This boxing manga was the first to really outline the template for the typical shonen sports manga, with a young boy facing down his personal demons and battling his way through a series of increasingly difficult matches—the equivalent to leveling up in a video game, but with a variety of sporting opponents. Although Put it All in the Ring was Shonen Manga’s first big hit, it wasn’t animated until 2006:

In addition to being one of the first big hits for Dragonball Z creator Akira Toriyama, Doctor Slump, a humorous series about a girl robot living in a place called Penguin Village, ushered in two decades of Toriyama manga and their subsequent anime adaptations.

This short-lived oddity gets even more quizzical when you realize that the cute blonde in the opening is actually a boy. How this ended up in Jump we’ll never know.

To say that this series is one of the most famous, popular, and influential anime series of all time is a  bit like calling the Marx Brothers slightly humorous. Thirty years after it premiered in Shonen Jump, DBZ is the second most popular manga title of all time, trailing behind another Shonen Jump title, One Piece. Featuring a distinctly rough but action-heavy art style and martial-arts-based fighting techniques, the adventures of Goku and his friends ran for eleven years and helmed the “Golden Age” of Shonen Jump. If you’ve ever wished you could clench your fists and enter Super Saiyan mode, you know the appeal DBZ has to kids of all ages.

Despite being one of the longest-running series in Jump history—it originally ran for 17 years—JoJo didn’t receive an anime adaptation until last year, making it formerly the most popular manga series in history not to be adapted. JoJo‘s anime introduced this epic manga about several generations of a slightly supernatural family to a whole new generation of fans.

Though this series about—what else?— a high school basketball team, is overshadowed by the many sports manga that have followed in its wake, its popularity helped pushed Shonen Jump’s readership to nearly 7 million during the mid-90’s.

This popular and influential manga about a wandering Samurai won praise for its historical authenticity and its serious fighting scenes. The anime, which clocked in at over a hundred episodes, continues to be regularly hailed as one of the greatest series of all time.

One of the great card game series, Yu-Gi-Oh!, about a boy who discovers that his alter-ego is a gambling addict, is a clever riff on other card battle series like Pokémon.

Still running today, One Piece is the bestselling Shonen Jump manga of all time, far outstripping predecessor Dragon Ball Z. And if you ever needed any fodder for your “ninjas versus pirates” argument, just remember that Luffy and his friends have plundered the high seas to even greater success than Naruto and his fellow black-clad hokage.

1998: Hunter x Hunter Think Supernatural meets Harry Potter and you understand the appeal of this long-running series about a boy trying to become a bounty hunter like his father before him.

Like 1999’s other hit, Naruto, Hikaru no Go combines elements of sports competition and the supernatural. Notable both for having a female author, Yumi Hotta, and for spearheading the career of Death Note artist Takeshi Obata, this series about a coterie of characters all obsessed with a thousand-year-old board game is credited with the single-handed revival of interest in Go in Japan.

Spawning one of the best-known anime series of all time, Naruto is currently the second-most popular title in Shonen Jump after One Piece and ahead of Bleach.  Its story about a fun-loving boy who grows up to be a powerful ninja is also probably the only anime series so beloved that it could inflict nearly two years of “filler” episodes on its viewers and still hang on to them. Fortunately, the “Shippuden” arc of the series was more than worth the wait.

2000: Bleach This story about a young man who becomes a reaper, complete with superpowers and awesome fighting abilities, completes the trifecta of current long-running Shonen Jump titles. It also has one of the more famous anime openings:

No less popular for its relative shortness, the impact of Death Note on manga culture is still being felt a decade later. Forget those longstanding rumors you’ve heard about the on-again/off-again/on-again U.S. film version. Not even the faithful anime adaptation can top the beautiful terror of Takeshi Obata’s artwork in the manga, with its grim intonation that the human whose name is written in this book shall die. Or, for that matter, the ongoing mystery about who its author, Tsugumi Ohba, really is.

The second collaboration between Ohba and Obata, Bakuman was a total departure from Death Note and a witty, engrossing exploration of the life of a mangaka, or manga artist—adding fuel to the rumors that its author, Ohba, is a once-popular manga artist himself, now writing under an obvious pseudonym.

A popular manga with an anime on the way, Nisekoi is the classic “fake lovers” trope, with a twist—these kids really do hate each other.

Nisekoi is hardly a typical title for Shonen Jump, but then with its trio of long-running bestsellers, and its track record of producing unexpected hits, Jump publisher Shueisha can afford to be experimental.

Shonen Jump‘s golden age may have passed, and as the number of publishers, along with the number of publishing models, has expanded in Japan, Jump‘s influence has declined along with its readership numbers. But only a handful of comics magazines on any continent can boast the kind of far-reaching influence, or the kind of successful track record, that Shonen Jump has had upon international culture.

And that’s just in its first 45 years.