After the third season of ‘Sherlock,’ fans have more questions than answers

After a mere 12 days of respite, Sherlock fandom is back in familiar territory: hiatus time.

While 2012’s “The Reichenbach Fall” united Sherlock fans in an agonized scream-fest over Sherlock’s apparent death, this week’s third season finale left viewers divided. Was it the best episode ever, as many British TV critics claimed? Was it a fittingly over-the-top finale to a season of television that plumbed the depths of Internet fandom? Did it actually make any sense?

Although earlier seasons inspired plenty of criticism for issues such as lack of diversity or poor representation of female characters, this season was the first time when Sherlockians began to develop serious complaints about the tone and central plotlines of the show. Within hours of “His Last Vow” airing on TV, fans were already tearing apart the continuity and internal logic of the final episode’s most important moments, demanding explanations for (spoiler alert!) why John’s wife Mary felt the need to shoot Sherlock when she had plenty of other options or why so many people on the show are suddenly able to outwit Sherlock Holmes. As Tumblr user marsdaydreams explained:

“This was like watching a comic book where the superpowers of the characters were just too powerful … they’ve created an impossible situation where everyone is smarter than everyone else. We’re meant to believe that Sherlock Holmes is the most brilliant man ever. Except for his brother Mycroft. Or maybe Irene Adler. Or Moriarty, because wait, HE’S just as smart as Sherlock. Or, actually, Mary Morstan, who turns out to be an intelligence agent. Except then there’s Charles Augustus Magnussen, who has his own mind palace which apparently puts Sherlock’s to shame. What’s in the water in England, seriously?”

The whole situation is succinctly summarized by this Sherlock quote T-shirt you can now find on the BBC’s online store. While the motto of the second season hiatus was “I believe in Sherlock Holmes,” it looks like the third season’s may be a little less inspirational: John’s oft-repeated “I still don’t understand.” 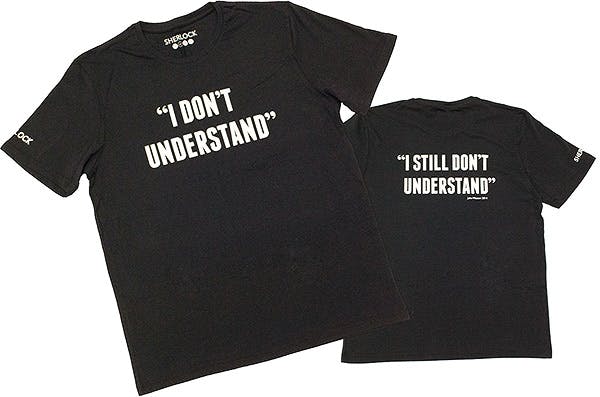 The question is: Has Sherlock jumped the shark? And if so, does it even matter? This is a show that already loved its melodramatic twists and implausible scenarios, from Sherlock’s infamous resurrection to the Hounds of Baskerville being the result of a secret government hallucinogen experiment. However, this season they really did take things a few steps further. Just take a look at some of the key moments of the season finale:

Aside from questions about potential plot holes, the main criticism of the season finale was rather more predictable: accusations of sexism. Thanks to Steven Moffat’s track record with female characters, many fans were on high alert in case the female characters’ storylines took a sudden turn for the worse. And, well, their predictions were half right. While Mary Watson didn’t turn out to be completely “evil” (or dead), Sherlock’s new girlfriend was on the receiving end of some pretty nasty treatment. As in, Sherlock faked their entire relationship so he could use her to break into someone’s office.

So that episode of Sherlock was…something. And I’m not even surprised by Moffat’s sexist writing anymore, I’ve come to expect it

As some fans have already pointed out, Sherlock’s relationship with Janine was basically how Moriarty treated Molly Hooper in the first season. Back then, though, that sort of behavior was portrayed as evil and manipulative. But when Sherlock went so far as to buy an engagement ring for his girlfriend in this week’s episode, it was played for laughs. When Janine finally discovered that their entire relationship had been a lie, Sherlock explained that they were even because she was a “whore” who exploited their breakup by selling her story to the tabloids.

For some viewers, this was the last straw. “He treated her like absolute shit all for his own selfish, manipulative, utterly disgusting reasons,” wrote Tumblr user claudiaboleyn. “When she lay potentially dead on the ground, he stepped past her and let John deal with her. And yet he had the nerve to call her a ‘wh*re’ for merely giving him a taste of his own damn medicine … Well, that sums up Steven Moffat’s style of writing really, isn’t it? Dripping with misogyny. I am disgusted, and any compassion I once had for the character of Sherlock Holmes has finally gone.”

The good news is, most fans of Molly Hooper agree that she had a far better time of it this season than Mary or Janine. Sure, most of her appearances in “His Last Vow” were in Sherlock’s “mind palace,” where she helped him think things through like some kind of weird cross between Inception and a personal assistant, but Sherlolly (Sherlock/Molly) shippers mostly saw this as proof that she is always on his mind.

Other viewers also found plenty to praise in Martin Freeman’s performance as John Watson. Reddit user baskandpurr said on the r/Sherlock subreddit: “The scene in [Leinster] Gardens was the most powerful acting in the episode and he didn’t say anything.” And plenty of fans were charmed by the season’s quick-witted banter, like the lines between Mary and John about “mow[ing] the sodding lawn” or Sherlock and Mrs. Hudson’s discussion of her past as an exotic dancer.

But whichever side viewers landed on, it will be interesting to see how Sherlock fandom develops during the wait between seasons three and four. The second season finale was a gift to fanfic writers, allowing people to write about one of the most emotionally compelling stories in canon: the death and resurrection of Sherlock Holmes, and the emotional toll it takes on John Watson. While mainstream audiences were mostly concerned with how Sherlock faked his death, fanfic readers and writers were far more interested in what this all meant for John and Sherlock’s relationship.

But Johnlock shippers will find things a little more difficult this time around. Not only is John married, but he apparently loves his wife enough to forgive her for shooting Sherlock in the chest. In order for a Johnlock relationship to thrive, either Mary has to be on board with the idea, or you have to dispose of her entirely. Plus, while the final scenes of “His Last Vow” are certainly dramatic, they don’t hold the same emotional sway as “The Reichenbach Fall.” It’s actually more likely that fanfic writers will concentrate on the time period within the third season, since it took place over several months, and the various flashback scenes in “The Rule of Three” give writers plenty to work with.

So, after a mere 12 days of respite, Sherlock fandom is back in familiar territory: hiatus time. Moffat has confirmed that there will be a fourth season, but considering the lead actors’ respective Hollywood careers, who knows when they’ll both be available at the same time? It’s highly likely that fans will have another two years to do what they do best: write fanfic, stir up flame wars, and speculate about whether Matt Smith will finally have a cameo as the third Holmes brother. There’s no way it can be as crazy as the last hiatus … right?