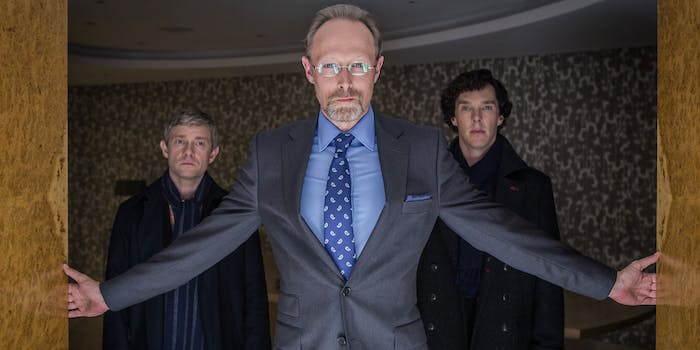 ‘Sherlock’ wrote a female character out of a classic story, and fans aren’t happy

Someone's missing from the TV adaptation of this Holmes tale.

Following last week’s Sherlock season finale, writers Steven Moffat and Mark Gatiss have been doing the rounds of publicity interviews, presumably glad that they don’t have to be quite as close-mouthed as they were last season. Unfortunately, this just led to them giving an interview with Empire magazine that already has Sherlockians up in arms.

Moffat and Gatiss touch on various aspects of the finale in this interview, but the part that stood out was a section where they discussed the original Holmes story that inspired the episode. In the original story, villainous blackmailer Charles Augustus Milverton is eventually murdered by one of his victims, while Sherlock’s Charles Augustus Magnussen is shot by Sherlock himself.

Moffat: If you read [The Adventure Of] Charles Augustus Milverton, Dr. Watson in the opening paragraph tells you that he’s about to tell you a porkie. He says, ‘I even now must be very reticent.’ I think what Doyle is hinting at is that Sherlock Holmes and Dr. Watson sat in Baker Street and said, ‘Right, we’re going to have to go and kill him, aren’t we? That’s the only way we can do this.’ So they break in, kill him, and then Dr. Watson writes up a version of the story that puts the murder [on someone else].

Gatiss: They’re hiding in their burglar masks behind the curtain, and this random woman comes and shoots Milverton in the face and then grinds her heel into his face. It’s odd, isn’t it? So I mean really, it’s just an extrapolation of saying, ‘Well, he probably did it, I think.’

In these quotes, Gatiss and Moffat are essentially talking about a concept that has been debated by Sherlock Holmes fans for decades: the conflict between “Watsonian” and “Doylist” perspectives on the stories.

A Doylist interpretation of Sherlock Holmes canon (or any other text, for that matter) is that each story is simply the invention of the author, whereas a Watsonian interpretation requires in-universe explanations for the way characters behave. In this interview, Moffat and Gatiss were looking at “Charles Augustus Milverton” from a Watsonian perspective in which the narrator (Watson) was purposefully unreliable, rather than a Doylist perspective in which everything in the story is exactly as it “happened.”

The problem here isn’t that the writers of Sherlock are reinterpreting the original canon. Only the most ludicrously dedicated canon fan would complain about that, since the show is clearly not meant to be a direct adaptation.

What has some fans angry is that Sherlock’s interpretation of Milverton’s death completely removes the agency and power of the female character in the original story. An unfortunate occurrence that neatly fits in with Moffat’s track record with female characters in both Doctor Who and Sherlock.

“The Adventure of Charles Augustus Milverton” is one of the very few examples in Victorian-era Holmes canon where a female character takes practical action on her own behalf, while Holmes and Watson technically fail to solve the case. Milverton, like Sherlock’s Magnussen, is a foe so powerful that it’s virtually impossible to defeat him using Holmes’ usual methods, which is why the story has to end with Milverton’s death. The final scene of the short story is Holmes identifying Milverton’s killer, but tacitly agreeing with Watson to let her get away with the murder because Milverton was such a loathsome figure.

If Moffat and Gatiss had simply said they wanted Sherlock to kill Magnussen because it was a more interesting story for him as a character, or because it provided an exciting development to lead into the next season, it wouldn’t have been a big deal. But the fact that they seemingly couldn’t believe that a woman defeated Milverton only exacerbates their problems with Sherlock fans who already take issue with the way women are portrayed in the show. Links to the interview are already spreading on social media, with commentary such as this angry post from Tumblr user mymomoness:

“So, let me get this straight. We have Watson telling us a completely believable story where a female character has agency for once and takes care of her own problem (and everyone else’s) by getting rid of Milverton, with perfectly good reason seeing as he’s been blackmailing everyone in town. it makes total sense that he would have shitloads of enemies and that someone would stand up to him eventually, especially if they had nothing left to lose as this woman does, and somehow that’s unbelievable?”

“The thing is, within the context of the original story, Watson constructed it to make total sense that a woman showed up and took revenge, and that Holmes figured out who it was. I don’t mind that they played with the idea of Watson being an unreliable narrator, but the fact that they downplayed the woman so much really grated against me. The “random woman” comment in particular — I was like, no, it wasn’t a random woman, it was one of Milverton’s victims. It’s just that downplaying some of my favorite female characters is becoming a pattern with them.”

In any interpretation of the Milverton narrative, Milverton has to die. As a ruthless blackmailer, he has too much influence over the rich and powerful to stay in jail for long. In Sherlock, Magnussen’s death becomes even more inevitable once we find out that he memorized all of his blackmail information. Basically, death is the only way to “delete” those files, so in the absence of the woman who killed Milverton in the original story, it does make sense for Sherlock to shoot him. The problem is, there’s another character who would have been far better qualified to shoot Magnussen, and guess what? She’s a woman as well.

In “His Last Vow” we learn that John’s wife Mary is a trained assassin, a fact we discover when she literally has a gun held to Magnussen’s head. But instead of shooting Magnussen and solving everyone’s problems, she decides to shoot Sherlock instead, in the hopes that this will (somehow) help her keep the truth about her past a secret from John. In the end, Sherlock has to do the deed.

This means that Mary, much like Gatiss and Moffat’s interpretation of the lady from “The Adventure of Charles Augustus Magnussen,” has effectively been written out of her own story. Supposedly a deadly assassin, she doesn’t get to confront her blackmailer, and instead is drugged by Sherlock so he and John can have a proper showdown with Magnussen. A dramatic scene that allows Sherlock to seem more badass and morally ambiguous than before, while a heavily pregnant Mary gets to wake up from her drug-induced slumber to discover that she’s now free to go back to being Mrs. Watson once again.

Moffat and Gatiss have as much of a right to reinterpret Holmes canon as any other fanfic writer. But even after four years of Sherlock, they seem unaware that fans will analyze their writing and public statements just as closely they did Arthur Conan Doyle’s. When they’re quoted as saying that a woman couldn’t have defeated the villain in one of the Holmes stories, they’re playing right into the hands of fans who believe Moffat is a misogynist who writes all of his female characters into the same corner.

And considering the evidence so far, those Sherlock fans may well be right.

Correction: The original version of this article misattributed one of the quotes from Tumblr’s mymomoness; it has since been amended to reflect proper authorship.