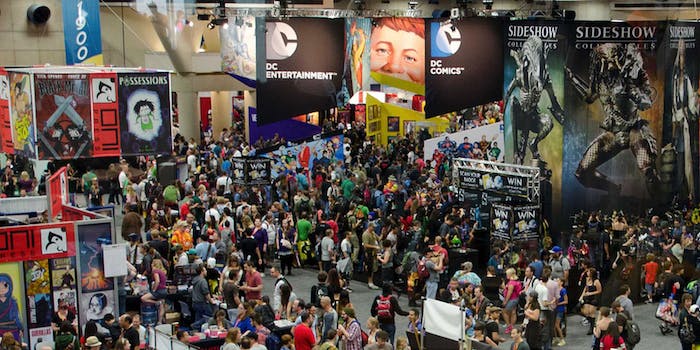 Following these people will keep you from being bored in long lines and will offer a unique look at what’s happening at the convention.

San Diego Comic-Con has arrived. While you set your plans for the massive four-day event into action into motion, have you remembered to prep your Twitter feed accordingly?

Twitter can be a great resource at the convention. Keeping an eye on hashtags like #SDCC, #ComicCon, #SDCCLine, #HallH, and #Ballroom20 can help you see what information people are sharing about everything from celebrity sightings to panel line lengths. Following interesting people can also keep you from being bored in long lines and offer a unique look at what’s happening at the convention.

Here are seven interesting people we recommend you follow on Twitter to get the most from Comic-Con this week.

Jim Lee is an industry tastemaker. He’s worked on a wide range of comics including X-Men, Superman, and the Fantastic Four and was one of the cofounders of Image Comics. If you need another incentive to follow Lee, he recently tweeted that he’ll be hiding sketches around the convention in honor of reaching 100,000 Twitter followers. Follow Lee for hints on where you can find these unique pieces of art.

Comic-Con superfans are great to follow because of their experience attending the convention as fans as well as professionals. Blogger Tony Kim offers tips, advice, and news about the convention and is very accessible on Twitter. He’ll answer questions that are tweeted at him, so if you need some help don’t be afraid to ask!

C.B. Cebulski arrived at comic-con early this year and has been tweeting some great photos showing what’s already going on. Plus if you love food, then add his account to your must-follow list. Founder of the Tumblr Eataku, Cebulski is passionate about food and often shares tips about bars and restaurants around the con. He’ll also be on some really interesting panels, including “A Feast for Your Eyes: Creativity in Comics and Cuisine” and “Breaking into Comics the Marvel Way.”

Speaking of food, joining Cebulski on his comics and cuisine panel is another must-follow individual: Jenn Fujikawa of JustJenn Recipes. Fujikawa’s Twitter feed is extremely fun to follow. She shares not only geeky food tips but also interesting news about off-site events in San Diego that you might not be hearing about elsewhere.

The creator of the webcomics Roomies!, It’s Walky!, Shortpacked!, and Dumbing of Age,  Willis’s humor and commentary in his comics bleeds into his Twitter feed. Getting Willis’s unique view on the convention will definitely keep you from being bored while you wait in line. Plus he often draws about his experiences at conventions and posts the comics on his feed, so you’ll also have something fun to read as you wait for panels to start.

Snyder is a legend in the making in the comics industry. His work on Batman has received rave reviews and he is currently working on a new Superman series with Jim Lee. He’ll also be speaking on a panel called “My Secret Origin or How I Broke Into Comics,” so if you’re interested in a comic book career watch his feed for tips from the panel.

Founder of The Nerdy Girlie blog, superfan Megan Gotch offers a complete guide to San Diego Comic-Con that every attendee should review. She shares daily tips and news on her feed and, like Tony Kim, is very open to answering questions you may have about the convention. Her feed is also unique because she shares cosplay and crafting advice if you want to add that to your Comic-Con experience.