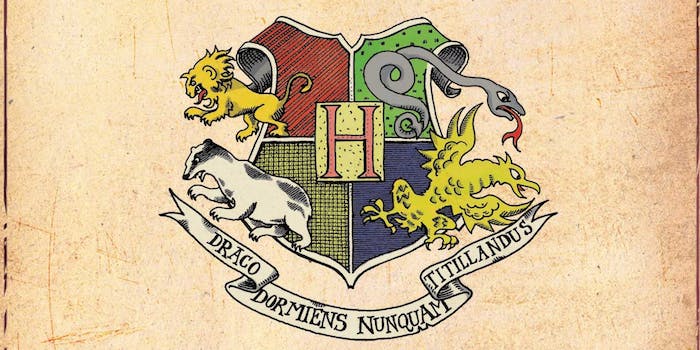 Rowling is writing "a new film series" that expands the wizarding world. Fans are overcome with joy.

And while that’s a sentiment that could be true on any given day, today it’s especially intense, because J.K. Rowling, after six years, is writing a new story in the Harry Potter universe.

The announcement, posted to her Facebook this morning, states that Rowling is writing “a new film series” that expands the wizarding world. The new series follows Newt Scamander, whom Potterheads will know as the author of Fantastic Beasts and Where to Find Them.  Set in New York around 1921, the movies promise to bring to life not only the character of Newt, but the unseen magical universe of New York itself.

As Tumblr user flyingcrowbar put it:

In her statement, Rowling explained that Warner Brothers basically incepted her by proposing the idea of a new film franchise to her:

Having lived for so long in my fictional universe, I feel very protective of it and I already knew a lot about Newt. As hard-core Harry Potter fans will know, I liked him so much that I even married his grandson, Rolf, to one of my favourite characters from the Harry Potter series, Luna Lovegood.

As I considered Warners’ proposal, an idea took shape that I couldn’t dislodge. That is how I ended up pitching my own idea for a film to Warner Bros.

Rowling has never written a screenplay of her own before, but fans are overjoyed she’s writing at all—especially because of her long-held axiom that she would only write more Harry Potter if she had an idea she was really excited about.

On Tumblr, amid the shock and joy, thethousandlives wrote, “Do you hear that? It’s the sound of the Harry Potter fandom rising from the ashes.”

And hallowsoverhorcruxes pinpointed why a straight-to-screenplay outing from Rowling might actually bring the fandom closer together:

Meanwhile, the fancasting has begun. “Dear JK Rowling and Warner Brothers,” pled Tumblr user princessfally. “Can we please have Benedict Cumberbatch or Tom Hiddleston as Newt Scamander in the new film! Please!!!!!!!!”

“Can we please have a Starkid Fantastic Beasts musical now?” added raggedymad, speaking of the acting troupe whose claim to stardom is A Very Potter Musical and sequels.

Meanwhile numberoneshipper wanted to know why her dashboard was exploding in random fandom news. “If we’re getting some superpotterwholock thing,” she said, speaking of fandom’s tendency to combine its favorite fandoms, “I’m all for it.”

Meanwhile, Hufflepuffs rejoiced that their house, generally considered the underdog of the four Hogwarts houses, would finally be getting a main character in the Rowlingverse. Coming just after Hufflepuff won the House Cup at Rowling’s online Potter offshoot, Pottermore, it was a banner day for the Badgers.

Still, not everyone was happy. “i don’t like feeling like i, as part of a fandom, am being used and manipulated for an economic end,” wrote kinkyturtle on Tumblr. “[L]ike, this fandom is so hungry that we will literally take whatever’s thrown at us.”

But fans, for the most part, are ecstatic. “I think I’m dead right now,” said RyanHBP in a reaction video on YouTube. “I’ve never been more surprised at anything, even when she wrote Cuckoo’s Calling,” referring to the revelation earlier this year that Rowling had started writing a mystery series under a pen name, Robert Galbraith.

Already, the news has breathed life into a fandom that’s been known in recent years more for its spinoffs and offshoots than for its new canon.

“Harry Potter isn’t over,” RyanHP added.  And Tumblr user arrogantbullyingtoerag summed up what seems to be the collective reaction:

FANTASTIC TEARS AND WHERE TO CRY THEM