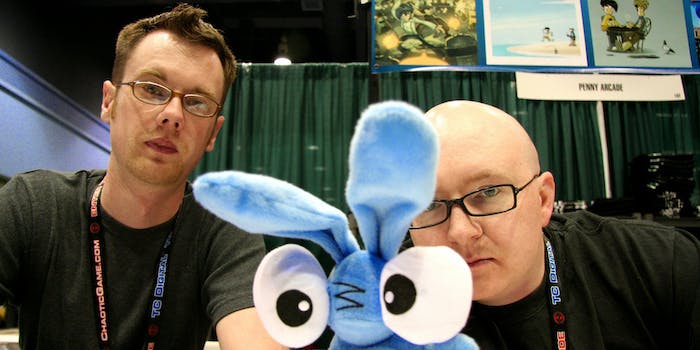 Is Krahulik’s ‘Dickwolves’ apology too little, too late for Penny Arcade fans?

Penny Arcade's artist has apologized for his rape joke and everything after it, but will fans forgive?

Just days after Penny Arcade’s Mike Krahulik unleashed the hounds—or perhaps we should say the Dickwolves—of controversy upon gaming fans, he’s already backtracking. But after a year of what seems like continual offensiveness coming from the heads of one of the gaming industry’s largest conventions, it may not be enough.

Krahulik, along with Penny Arcade co-creator Jerry Holkins, has been dealing with the fallout from the rape joke controversy that just won’t die ever since 2010, when they produced a comic that made a joke out of slaves in a fantasy game being “raped to sleep” by “dickwolves” nightly. When fans complained, Krahulik and Holkins reacted with varying levels of defensiveness and mockery, including creating and selling “dickwolves” t-shirts—very briefly—in the Penny Arcade merchandise store before backtracking and apologizing for the rape joke.

In an extended blog post this morning at the website for his hugely popular webcomic, Krahulik clarified what he meant when he told a crowd at Penny Arcade Expo (PAX) that “pulling the Dickwolves merchandise was a mistake.”

Krahulik clarified that the statement had originally been made in response to panel moderator Robert Khoo’s question to Krahulik about whether Khoo himself, as Penny Arcade’s Business Manager, had ever made a mistake. Krahulik noted that during the panel he hadn’t been able to elaborate on why he thought Khoo’s decision to remove the Dickwolves merchandise was a mistake. Then he launched into the most forthcoming, and perhaps the least defensive, Dickwolves-related statement he’s ever made in public:

“So let me start by saying I like the Dickwolves strip. I think it’s a strong comic and I still think the joke is funny. Would we make that strip today? Knowing what we know now and seeing how it hurt people, no. We wouldn’t. But at the time, it seemed pretty benign. With that said I absolutely regret everything we did after that comic. I regret the follow up strip, I regret making the merchandise, I regret pulling the merchandise and I regret being such an asshole on twitter to people who were upset. I don’t think any of those things were good ideas. If we had just stopped with the strip and moved on, the Dickwolf never would have become what it is today. Which is a joke at the expense of rape victims or a symbol of the dismissal of people who have suffered a sexual assault. the comic itself obviously points out the absurd morality of the average MMO where you are actually forced to help some people and ignore others in the same situation. Oddly enough, the first comic by itself is exactly the opposite of what this whole thing has turned into.

“If you saw the panel you know that someone in the audience shouted out and asked us to bring the merchandise back. Both Robert and I immediately said no way. We have worked very hard to make PAX a safe place. We have an incredible anti-harassment policy, a “booth babe” policy [Ed. note: PAX is one of the only industry conventions to explicitly ban the practice of using “booth babes” as advertising in its booth space] that you will not find anywhere else in the industry, and panels that cover all the social issues facing gaming today in a meaningful way. That’s the heart of PAX and that will never change.”

As comprehensive as Krahulik’s assessment of the controversy is, he stops short of assuming complete accountability in a number of ways. He blames Khoo for convincing him to pull the merchandise, and fails to acknowledge that had Penny Arcade actually continued to sell Dickwolves t-shirts, their apology would have seemed insincere, and the company would almost certainly have continued to alienate fans.

But that’s not the only odd and large blind spot that Krahulik has. One of this year’s “panels that cover all of the social issues facing gaming today” was a highly controversial panel for PAX Australia called “Why so serious?” which implied that anyone who cared about sexism, diversity, and other issues of representation was taking the gaming industry too seriously. For his defense of that panel, Krahulik wedged himself into a hole with a series of transphobic tweets, for which he eventually backtracked, apologized, and donated $20,000 to the Trevor Project as atonement.  But while it was retitled and retooled, the panel stayed on PAX Australia’s program list, and Krahulik, faced with a number of businesses who pulled out of the show as a consequence, stated that he hoped the absent attendees would feel free to submit panels of their own in the future—which seems to miss the point about why the panelists stayed away to begin with.

In a year where Krahulik has been heavily criticized by the likes of Wired as having a “foot in mouth problem,” there’s undoubtedly some self-aware irony to his statement that “I can’t promise I won’t piss you off again at some point.”

But many critics have noted that Krahulik’s real problem is not his kneejerk thoughtless statements followed by reactionary defensiveness; it’s how he and his company as a whole deal with the fallout. In an essay from Tuesday entitled “Quit Fucking Going to PAX Already What Is Wrong With You,” game designer Elizabeth Sampat pointed the finger at both Holkins and Khoo for “enabling and supporting” Krahulik’s behavior. A commenter named “Fluffy” agreed:

I’m pretty forgiving of mistakes, but the people who make the mistakes need to actually realize they ARE mistakes, and not only does Mike keep on making the same mistakes over and over, he makes it everyone else’s problem for not embracing his shitty attitudes. And in this case they think that the mistake was “engaging” with the detractors, by pulling a shirt — which they’d made in order to engage with the detractors in the first place. They hypocrisy, revisionism, and lack of thoughtfulness is absolutely astounding.

Others have agreed as well—including longtime fan, personal friend to PA’s creators, and former Penny Arcade website moderator Emma Story, who told Wired today that the “unexamined privilege in [Mike’s] viewpoint is sort of breathtaking.” On Twitter, the response to Krahulik’s post was largely one of skepticism and a feeling that it’s too little, too late:

Welp, that’s it. I’ll do my part by adding https://t.co/iPU8k27CCO to the list of blocked domains in my browser.

Please boycott Penny Arcade. Every dollar Krahulik makes reinforces his reality in which there are no consequences for his hate speech.

Does this actually make a difference? At some point are words, even eloquent ones, no longer enough? https://t.co/eRiYymZLyq

Does this actually make a difference? At some point are words, even eloquent ones, no longer enough? https://t.co/eRiYymZLyq

Even on Reddit, Penny Arcade fans were largely in the “check your privilege, Mike,” camp. When Redditor facepoppies pointed out that Krahulik had taken plenty of flak ever since the controversy first happened, Jreynold responded, “Yeah, but he’s also got the safety and comfort of his entire empire behind him.”

But given the overwhelmingly guarded reaction to Krahulik’s apology, it’s an empire that may be in desperate need of a coup.