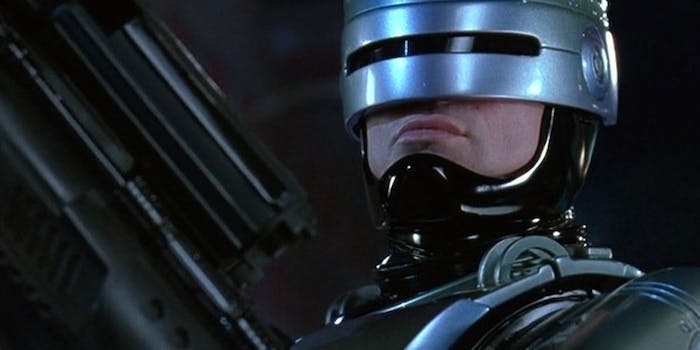 ‘Your move, creep’: RoboCop statue to watch over Detroit in 2014

A giant replica of the city's iconic guardian is not far off.

A little more than three years after Detroit Mayor Dave Bing tweeted that the city had no plans to erect a statue of beloved action hero RoboCop anytime soon, the citizens of that metropolis will have a ten-foot replica of their science-fictional protector to watch over them.

The project was crowdfunded through Kickstarter in just six days, back in 2011: Imagination Station Detroit, a local non-profit devoted to revitalizing the area, raised $67,436 in total, well more than the $50,000 they asked for, thanks to generous fans of the RoboCop franchise—not to mention a $25,000 donation from graphic designer Pete Hottelet, whose firm, Omni Consumer Products, takes its name from the original movie’s evil corporation.

We won’t have much longer to wait for results: the statue of cybernetically-enhanced police officer Alex Murphy is scheduled to go up in the summer of 2014, following the release of a remake of the Paul Verhoven’s ultra-violent 1987 cult flick, due in February. It’s unclear whether the piece will find a home on Wayne State University’s TechTown campus, as originally proposed, or elsewhere, but in any case, optimism is running high, according to The Hollywood Reporter:

Upon seeing the statue—currently being assembled in Detroit ahead of a 2014 unveiling—John Leonard, who started the whole ball rolling, admitted that it was “larger than even my wildest imagination.”

The statue itself will be the result of collaboration between Venus Bronze Works and Center for Conservation, Warren Ally Foundry and Edgewise Forge. Giorgio Gikas, from Venus Bronze Works, told the Detroit Free Press that he believes the status represents “the new generation of our town.” Leonard sees it similarly. “I think it complements a lot of the other positive things that are happening in the city,” he said.

The specs used in construction were also completely authentic, coming from Fred Barton Productions, MGM’s official licensee for RoboCop, which ought to guarantee a thrillingly accurate figure. So get ready for some art that will serve the public trust, protect the innocent and uphold the law, in keeping with RoboCop’s prime directives.

We can probably do without sequels, though.