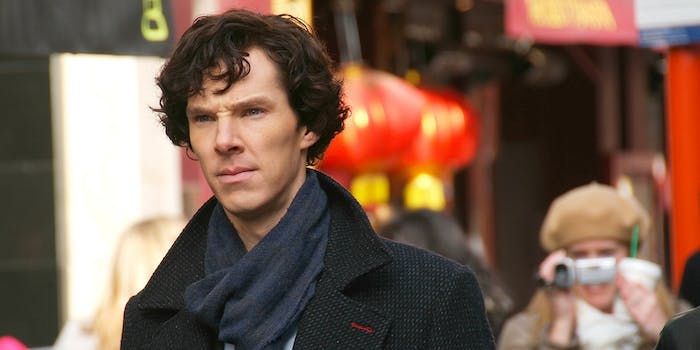 Chinese fans can’t get enough of this Benedict Cumberbatch lookalike

When 16-year-old Tyler from Norwich, U.K. posted a selfie with a photo of Benedict Cumberbatch on Instagram a few months ago, he probably expected a handful of likes and comments remarking on his resemblance to the beloved Sherlock star.

Much to his surprise and chagrin, however, Tyler was greeted with thousands of effusive comments from Chinese Sherlock fans—and now he’s asking them, in no uncertain terms, to leave him alone.

Tyler’s Instagram notoriety began last December, when he posted a selfie alongside the 37-year-old Cumberbatch, with the hashtags #lookalike, #twin, and #cumberbatch. (Because Tyler is a minor, we’re not referring to him by his full name or linking to his Instagram and Facebook profiles.) He also posted a screengrab of Cumberbatch’s appearance on the cover of Entertainment Weely, with the caption “selfie.”

In truth, Tyler (who, according to his Facebook page, is a fan of girls in bikinis, cars, and smoking weed) bears only a passing resemblance to Cumberbatch. While they share the same impossibly high cheekbones and piercing blue eyes, the similarities pretty much end there.

But apparently, they were enough for the photos to go viral in China, where British TV shows like Sherlock and Downton Abbey have amassed a rabid cult following on popular streaming video websites. Almost instantly, Tyler’s photos were shared on the Chinese social media platform Sina Weibo, and thousands of Sherlock fans flocked to his Instagram to leave comments in Chinese.

“You are truly a baby Benedict!,” one wrote, while another posted, “You should post some videos of you pretending to be Sherlock. Say some quotes, please?”

Unfortunately, Tyler appears not to have been so pleased with the onslaught of attention from his new fans. “Chinese followers. Stop commenting on all my stuff,” he said in a screengrab of an iPhone note he posted last Friday. Some fans appear to have been wounded by the post, accusing Tyler of drawing attention to himself and, in some cases, of being racist toward his new Chinese fans: “You wanted to be famous and the Chinese followers made it [happen]. Everything has double sides,” one wrote.

Most of Tyler’s fans, however, seemed fairly contrite, apologizing for the behavior of their fellow commenters. “Hi just want you to know that not all your Chinese followers are retarded and I feel terrible for what they’ve done,” one wrote. “Sorry for all the inconvenience they’ve caused. have a nice day.”

Tyler has yet to respond to his followers’ comments. Since he posted the note admonishing his Chinese fans, however, it appears that he’s accepted, or at least come to terms with, his newfound fame. Yesterday he posted another selfie, with the hashtags #benedict and #baby #batch, which has already garnered 137 comments.