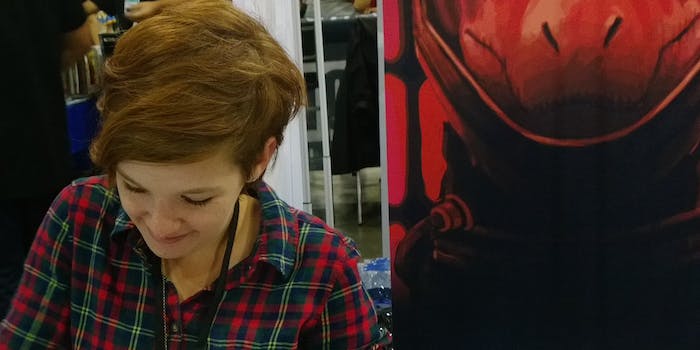 This comics artist quit going to comic shops because of sexism

Gingerhaze is tired of the geek culture gatekeepers who've made her IRL comic shop experience a sexist one.

Noelle Stevenson, a.k.a. Gingerhaze, may be a Tumblr celebrity and one of the most well-known comic artists on the Internet, but she still can’t get fair service when she walks into a real life comic shop. 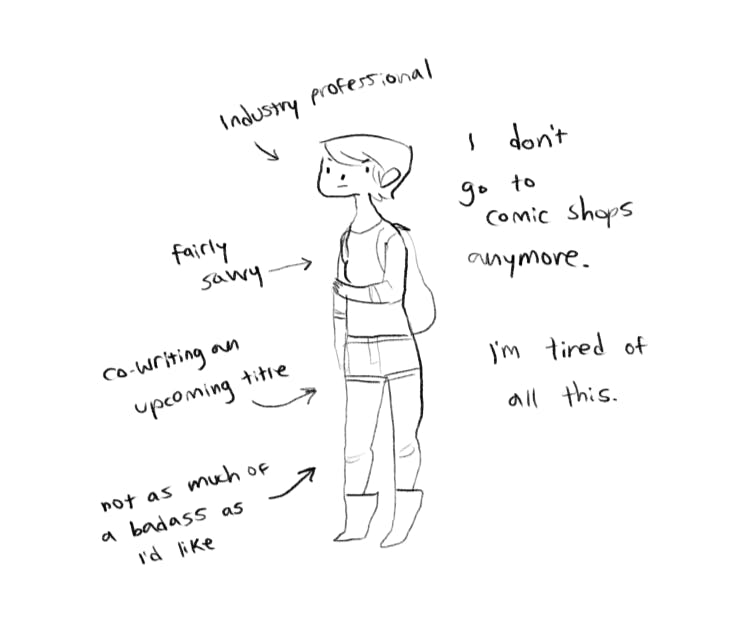 In a comic posted yesterday that quickly went viral on Tumblr, Stevenson sketched her frustrations with the many ways that geek culture’s rampant sexism manifests the moment a woman walks into a comics shop.  In what will probably be a familiar refrain to other comics-loving geek girls, Stevenson ran down the list of uncomfortable moments she’d experienced when trying to buy comics in person. 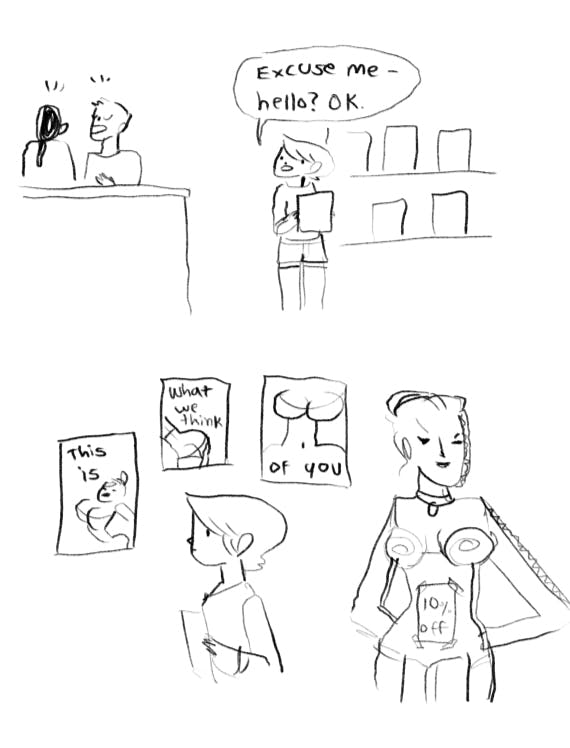 “The first time I shopped at a comic shop, it was because I had been published in a comic book,” she wrote. “As I became more involved in comics, I started going more and more, usually to support my friends or lady-friendly comics.”

Stevenson is the author of Nimona, a popular original webcomic that’s being published in book form next year. She’s also known for her many hilarious fanart takes on geek culture. But Stevenson, as her comic details, had the experience that many women have when they walk into comics stores: she is frequently met with derision from male staff and customers, along with having her tastes and reasons for buying comics questioned.

“It’s not hard to figure out when you’re not welcome,” she wrote.

Stevenson echoed fellow well-known female artist and comic shop worker Kate Leth, who sparked a similar discussion in 2012 about the way women are treated in comics shops. Let was prompted to rant about the problem when a father discouraged his geek girl daughter from shopping for comics. “You bet yr ass I gave her a free comic,” Leth tweeted, after the man informed his daughter there was “nothing for her” in Leth’s store.

“I’ve had it with the self-appointed gatekeepers in comics,” Stevenson said.

But soon after her comic blew up on Tumblr, Stevenson was treated to an online example of the kind of gatekeeping she, Leth, and countless other women in geek culture had experienced. Tumblr user callmeprofessor reacted to Stevenson’s comic with anger, questioning the knowledge of the women who came to comics stores and opining the loss of comics that functioned purely as “escapism” for male geeks:

suddenly.. about, idk, 4-5 years ago, feminists started to tell us that we are in the wrong for BUYING things. Instead of going to the writers, we’re the bad guys. Comics I grew up with are being torn to pieces by people who don’t read them anyway. They’re causalized [sic] because instead of catering to us, they’re catering to people who don’t really care. I know that the majority of you will go “oh, grow up!”, but you know what? Fuck you, comics were one of the things I had growing up, I emotionally connected to the Hulk, it made me feel that maybe it wasn’t so bad to be a freak.

secondly, I don’t know why women expect to get help with everything and just give up when they don’t get help. When I started out, do you really think anyone would even care about a fat, acne-cursed kid? I did ask, once, they just looked at me and told me to just read the damn comics . . . I don’t know why everyone think that being a nerd is “share and share alike!” . . . you’re not a nerd until you know your shit.

But Stevenson’s comic had already expressed how these kinds of “we were here first” types of reactions impeded her ability to get into comics, making her intimidated and afraid to go near comics to begin with. Her response created a maelstrom of discussion on Tumblr, as the post ballooned to over 60,000 notes and reblogs in under a day. After pointing out that callmeprofessor was accusing her of not caring enough about comics, when she literally is a published comic book author, Stevenson got right to the heart of the debate over women in geek spaces:

First you say “this is escapism for us men” and then you say “no one HELPED me get into it” as if having a medium LITERALLY CONSTRUCTED AROUND PEOPLE WHO ARE EXACTLY LIKE YOU isn’t the biggest spoonfeeding you could possibly get.

And now there’s a whole lot of people who don’t fit YOUR very narrow definition of what a “true nerd” can be who are FIGHTING UPHILL to be a part of this thing they love that doesn’t love them back and you have the nerve to say they don’t CARE about it enough and they’re expecting special treatment. As if it’s special treatment to BE SAFE FROM HARASSMENT, SEXUALIZATION, AND CONDESCENSION IN A PUBLIC SPACE.

No one’s taking comics away from straight white men. But I certainly wouldn’t mind taking it out of the hands of men like you, that’s for sure. You’re dinosaurs. And you’re not a REAL nerd.

Unfortunately for Stevenson and her many female fans, the phenomenon of male geeks who feel threatened by women who encroach upon their privileges doesn’t seem to be going away any time soon. If anything, with the advent of backlash over “fake geek girls,” and orchestrated campaigns of harassment against women who tackle the geek culture status quo like Anita Sarkeesian, tensions in the gaming and comics communities seems to be increasing, as participants on both sides of the gender issue grow more willing to rally in numbers and confront their opponents.

As for Stevenson, she urged women to stay positive, adding that she didn’t want to be defeatist and pointing out the existence of Hater Free Wednesdays, a Tumblr that tracks comics shops that are praised for their inclusivity and welcoming spaces. Wednesday is the day that comics shops traditionally get in their new releases—the perfect day to welcome new customers.

But as callmeprofessor illustrates, many men just aren’t ready to accept the ways in which women’s participation in comics might change comics culture.

And while some stores open their doors to women and other marginalized fans, it’s clear that on Wednesdays, most comics shops don’t wear pink.