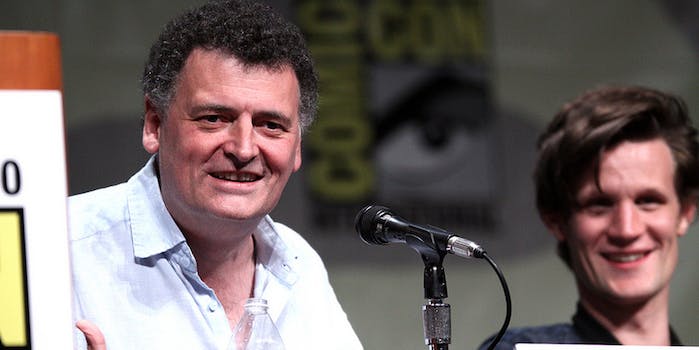 There are so many Moffat quotes floating around Tumblr that the new parody blog Moffat Says managed to slip in under the radar.

In his time as showrunner of Doctor Who and Sherlock, Steven Moffat has become a divisive figure among fans of BBC television drama. Both shows are massively popular, but after the first blush of success, many viewers began picking up on details that were, well, less than appealing.

The biggest issue many fans have with Moffat is his seemingly old-fashioned attitude toward women—Jezebel’s Madeleine Davies calls it a “creatively lazy dude preference”—and the ways in which Moffat has rewritten Doctor Who canon to suit his own cast of characters.

Moffat’s publicity interviews (and his Twitter feed, before he deleted it) often contain flippant comments, which are then collected by frustrated fans as proof of his supposed lack of respect for women and the five-decade history of Doctor Who. There are so many Moffat quotes floating around Tumblr that the new parody blog Moffat Says managed to slip in under the radar.

Every quote on Moffat Says is utterly fake, but much like with articles from the Onion, a small proportion of readers are quick to fall for the joke and believe the content is true.

Just take a look at these Moffat soundbites. Which are from real publicity interviews, and which are Tumblr satire?

“Between the marriages, I shagged my way round television studios like a mechanical digger.”

On the casting of Karen Gillen as Amy Pond in Doctor Who:

“I thought, ‘Well, she’s really good. It’s just a shame she’s so wee and dumpy.’ … When she was about to come through to the auditions I nipped out for a minute and I saw Karen walking on the corridor towards me and I realised she was 5’11, slim and gorgeous, and I thought, ‘Oh, oh, that’ll probably work.’”

“The world is vastly counted in favour of men at every level—except if you live in a civilised country and you’re sort of educated and middle-class, because then you’re almost certainly junior in your relationship and in a state of permanent, crippled apology. Your preferences are routinely mocked. There’s a huge, unfortunate lack of respect for anything male.”

On the difficulties of writing female characters:

“There’s this issue you’re not allowed to discuss: that women are needy. Men can go for longer, more happily, without women. That’s the truth. We don’t, as little boys, play at being married—we try to avoid it for as long as possible. Meanwhile women are out there hunting for husbands.”

Actually, that one was a trick question. All four of those are genuine Moffat. The real deal.

So you can see why these fake quotes from Moffat Says are so entertaining to the long-suffering anti-Moffat corner of Doctor Who fandom.

On actor Christopher Eccleston’s absence from the Doctor Who 50th anniversary special:

“His exact words were, ‘A fucking reset button? Like fuck am I coming back to canonically nullify my character arc.’ I still can’t figure out what he meant by that.”

On the possibility of casting a female Doctor.

“I suppose, if it has to happen, I’ll get behind it… But she better have a decent pair.”

On all the jokes about the Doctor’s sonic screwdriver:

“…Then it hit me. The sonic screwdriver is shaped like a dong. I thought there was so much potential for comedy in there… We’d be stupid not to milk it for all it’s worth.”

To be honest, the only thing separating that last quote from a real Steven Moffat interview statement is the useage of the word “dong.” He’d probably say something more British. Which is why several of the Moffat Says posts have spread across thousands of Tumblrs in just one week. Like all good satire, they tread the line between believable and absurd.

It’s just too bad that one of the world’s most beloved sci-fi franchises is currently in the hands of someone who could plausibly have said, “I write very good women. I can’t think of a single woman I’ve written who I wouldn’t bang.”