Dieselpunk for beginners: Welcome to a world where the ’40s never ended

Past meets future in an aesthetic movement that encompasses art, music, cosplay and weaponry.

Imagine a world where the ’40s never ended—a world where even as technology advanced, the threat of Fascism continued to loom, film noir and screwball comedies were still all the rage, and swing bands and Arrow collars were still the height of fashion.

You might think that technology would stagnate in such a world, along with the cultural aesthetic, but instead, technology advances further and faster than we could imagine. Think Colt .45s that can also shoot transporter beams; brass fighter pilot goggles, made of leather and equipped with Google Glass; bomber jackets lined with fiber-optic transmitters; super-sonic trains racing with zeppelins that can break the sound barrier; robotic bartenders who greet you with a tip of the fedora once you’ve given the secret password to enter the speakeasy, where mellow jazz plays over a lazy techno beat.

And the password to enter this world fused from the past and the future? 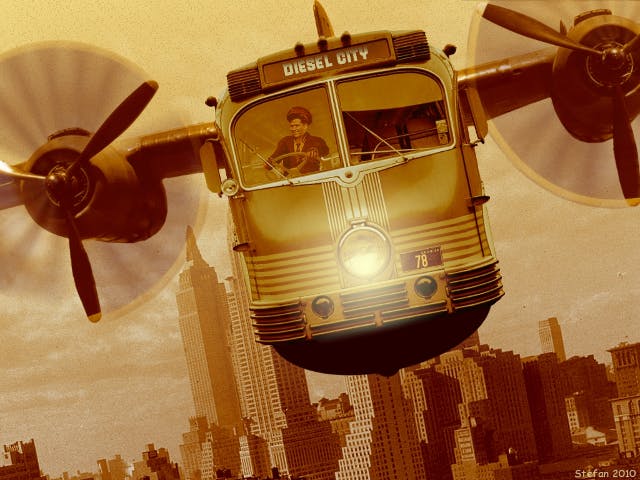 If you know anything about the ’punks of the day, you probably know about steampunk, the thriving Victoriana-based fashion, literary, and artistic movement that marries futuristic sci-fi and a love of vintage cool stuff. But the historical punk movements don’t just stop at the brass gadgets, bustle-bedecked fashions, and clockwork mechanisms that steampunk does so well. Over the last decade, steampunk, itself a derivative of cyberpunk, has given rise to an entire litany of offshoots: stitchpunk, elfpunk, desertpunk, clockpunk, Teslapunk, nanopunk, biopunk, atompunk, insert-cool-historical-period-or-innovative-concept-here-punk.

Among them all, dieselpunk occupies a unique position: sandwiched between the vast industrial revolution and multi-generational stretch of the steampunk era, and the short but iconic sci-fi-friendly era of the ’50s known as atompunk. Dieselpunk has, at best, three decades to its provenance. Hallmarked by the advent of diesel engines for major machinery, particularly war machines, dieselpunk begins roughly around the time of the first World War, and finds its apotheosis in the second.

If steampunk’s calling card is a dazzling spectacle of brass, clockwork, and earth tones, then dieselpunk’s is steel and chrome mixing with the grime and grit of modern machinery, the nostalgia of unironic patriotism, and a touch of the misery and existential dread that accompanies modernism.

“It’s dirtier, grimier, edgier than steam,” says a member of the Dragonfly Armory at the packed Dieselpunk 101 panel at Dragon Con 2013. They’re a group of cosplayers committed to their aesthetic. “Everyone carries a weapon,” instructs their website: “grenades, flame-throwers, handguns, shotguns, machine guns, you name it.” 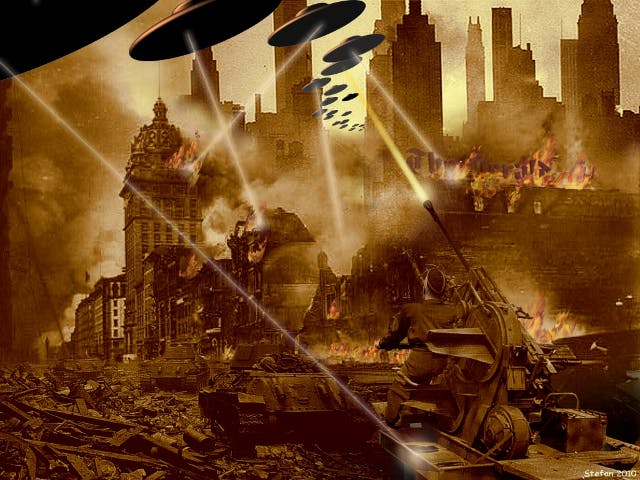 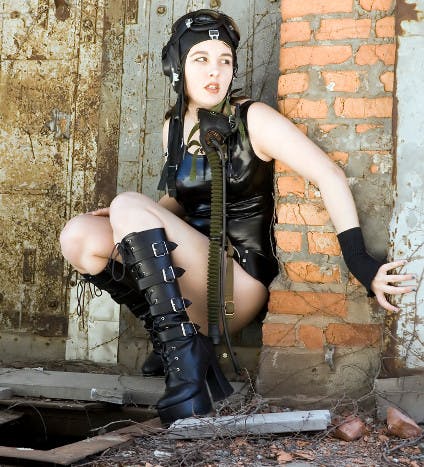 What does it mean to have a “-punk” aesthetic?

In the beginning, the science fiction author Bruce Bethke coined the term “cyberpunk” in his 1980 short story of the same name. Cyberpunk lends itself to a dystopian landscape that has made its way into the cultural landscape, from Blade Runner to the anime classic Akira. Cyberpunk fused the cutting-edge culture of the present—particularly modern Tokyo—with the dark possibilities of a future crowded with cybertechnology. Suddenly science fiction, which has always prized world-building, had a new modern landscape to build on.

But the worldbuilding didn’t stop there. Free to imagine alternate realities and alternate histories, lovers of sci-fi looked backwards and forwards to imagine entirely new universe concepts. What if humans were virtually rag dolls? Stitchpunk. What would be the consequences for the future if genetic modifications became a normalized part of society? Biopunk. What if technology had advanced far faster than culture by the 19th century? Steampunk.

When we say dieselpunk and all the other literary and artistic subgenres of cyberpunk are an aesthetic, we mean that the practitioners try to envision as complete a world as possible, keeping the style consistent throughout. That means that we don’t just get historically inspired dieselpunk fashions and gadgets and weaponry; we get a look that permeates the design of everything from automobiles to architecture. 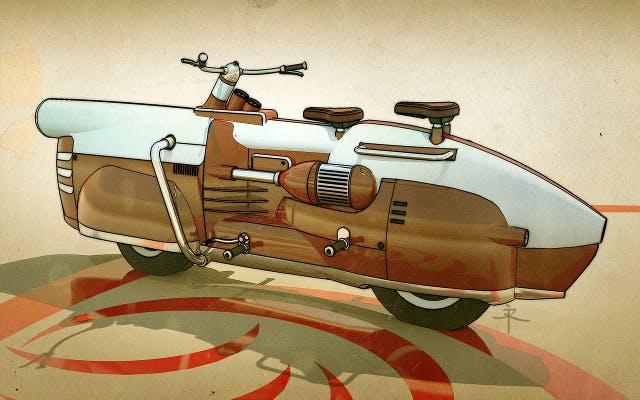 There’s even a growing musical component, with an emphasis on electroswing and nostalgic sounds fused with modern elements and beats: 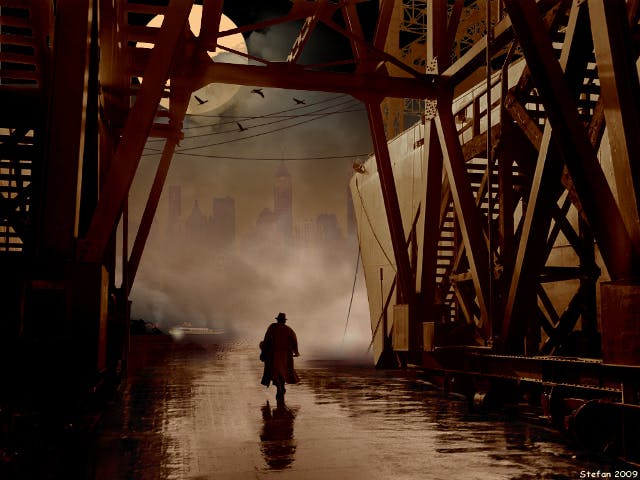 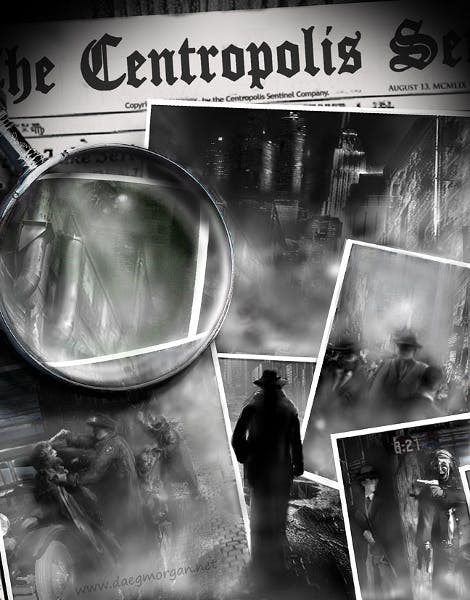 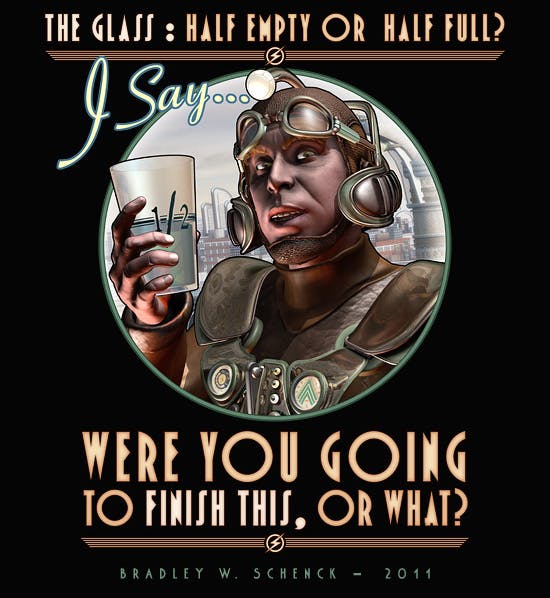 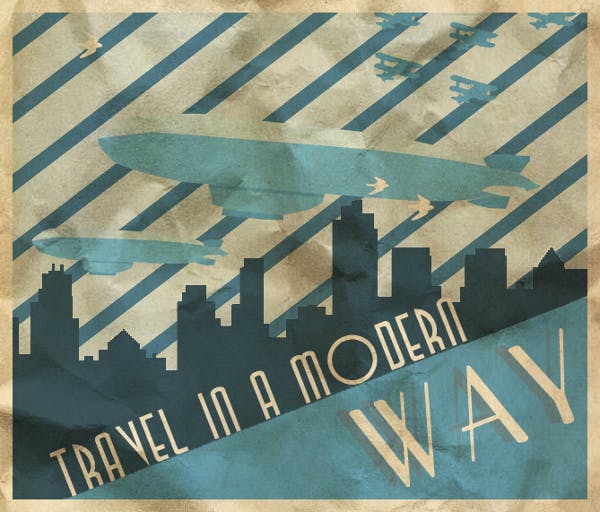 What makes this “punk,” exactly?

It might be easy, at first glance, to assume that all of this is just a depiction of history. Aren’t cosplayers just dressing up in military uniforms?

Well, no, not really. 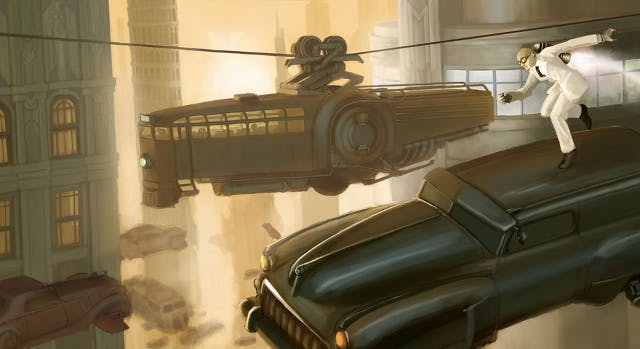 Like the other historically based aesthetic sci-fi movements, dieselpunk strives to alter something fundamental about what we know and understand of history. Whether it’s by advancing technology, infusing the universes with magic and the occult, inventing fantastical weaponry, or bringing 20th-century aesthetics forward into the future, dieselpunk is about amalgamation. 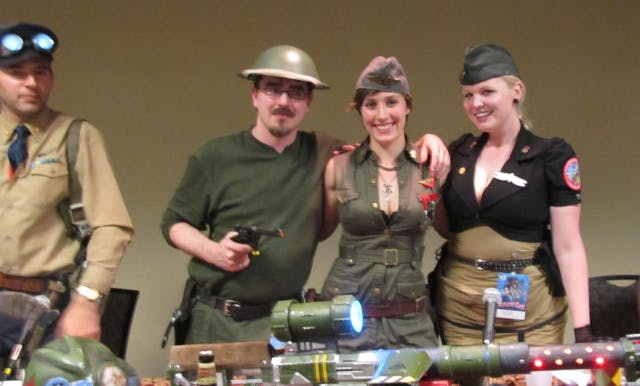 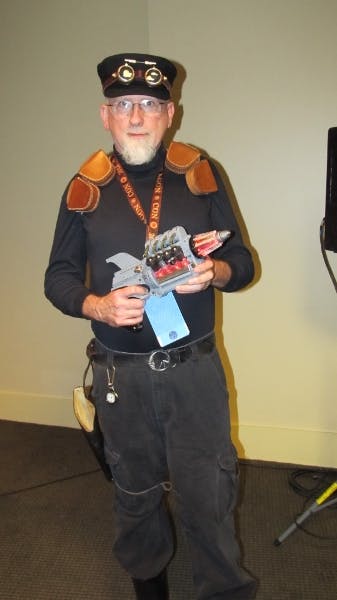 Sometimes the results can be surprising. 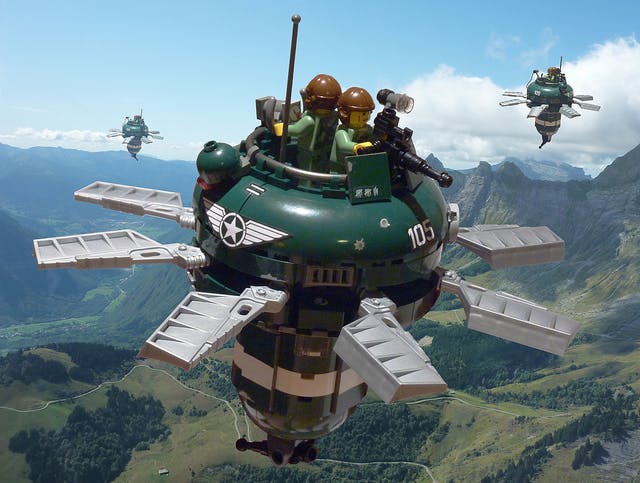 But the emphasis on all of this historicity isn’t without a cost.

Does dieselpunk glorify war? And Nazis? 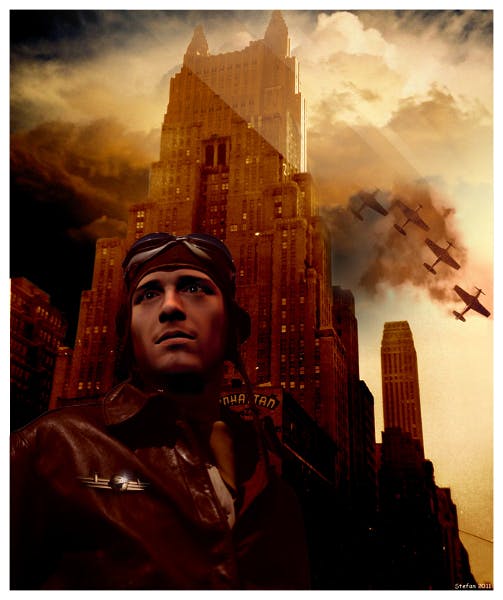 Yes and no. The truth is, Nazi Germany frequently factors into depictions of dieselpunk, particularly in costuming like SS uniforms, Nazi insignia and medals, boots, and oxygen masks. Many dieselpunk fans insist that they are only representing a fascist aesthetic rather than endorsing it, but it can be hard to tell, especially given that the vast majority of dieselpunk gets its grime and grit from a focus on the war. 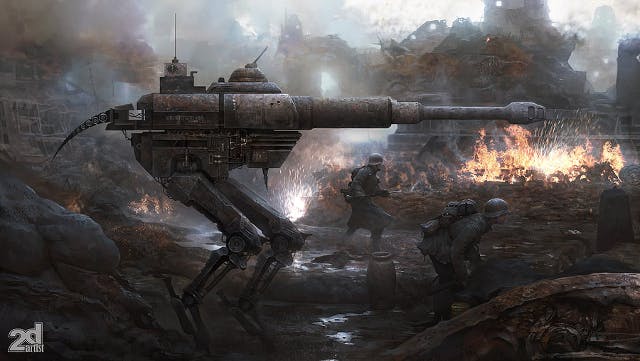 Often the emphasis on war comes with a healthy critique of the “greatest generation” mythos of Americans in World War II, but many view this era as an unironic ideal, despite the many problems it carries with it. Another unfortunate trait of dieselpunk—a trait it shares with steampunk—is a whitewashed history that primarily focuses on white Europeans and Americans. As bearbronson on Tumblr put it:

I think Dieselpunk is kinda cute, but then I remember that it’s focused around the 1920s-1940s and remember that it really wasn’t a good time to be a minority such as myself. This also applies to greaser-looks, steampunk and anything pinup, really. I could pretend that this is an alternate reality where that shit doesn’t exist, but it doesn’t help when every steampunk/dieselpunk film/show doesn’t even acknowledge the existence of minorities. When the most ethnically diverse thing to come out of Dieselpunk is the Disney cartoon TaleSpin, I pretty much say fuck all of that nonsense and tap out.

To counteract this trend, recent small but growing movements called steamfunk and dieselfunk have attempted to offer alternatives that merge the two aesthetics with representation of black culture and actual black historical experiences.

And to counteract all the Nazi fetishism, many proponents of dieselpunk propose anti-Fascist depictions of the culture. Anti-Fascist diesel involves strenuously decrying the wearing of costumes that involve Nazi uniforms and insignia. It also encourages looking for outside sources of inspiration, such as actual anti-fascist opposition during the war.

Still, the fascination with Nazis as part of alternate history is a recurring theme. On the largest Dieselpunk Facebook community, the greeting asks, “Interested in genetically altered Nazi soldiers?” while posts wonder what would happen if Britain sided with Germany during the war, and rhapsodize about the might of Nazi spider tanks.

Perhaps because of the negative implications overemphasizing the war, a subset of Dieselpunk has sprung up that focuses primarily on the artistic and cultural sensibilities of the ’20s and ’30s rather than the war-torn ’40s. Where diesel is industrialized and dark, deco is sleek and glamorous. Familiar examples of decopunk include the first two Bioshock games, elements of Baz Luhrmann’s Great Gatsby, and Janelle Monáe’s retro-android concept albums Metropolis and The ArchAndroid.

Monáe is influenced heavily by a film that serves as a huge inspiration for both diesel and decopunk: Fritz Lang’s silent masterwork Metropolis. Frequently hailed as the first modern science fiction film, Metropolis embodies the retro-futuristic qualities of dieselpunk and decopunk. But if you want modern film and media examples, there are plenty to be had.

Examples of Dieselpunk in the media:

Though Dieselpunk is a small community, it continues to grow. There are ways to get involved, especially online: Dieselpunks.org is the leading online site for news and info on dieselpunk events near you; other communities thrive on Facebook, Meetup, deviantART, and Tumblr.

Even with all its faults, dieselpunk is a vibrant, creative way to explore a turbulent time in world history, and get to know members of the community. So if dieselpunk is calling to you, there’s no time like the (futuristic) present to go ahead and: 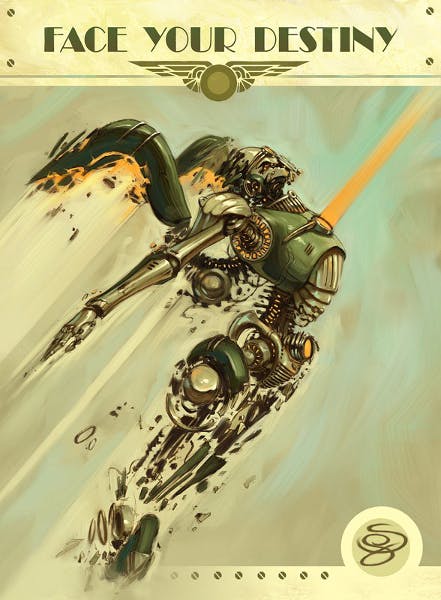 Illustration by Ian McQue via conceptships/Blogspot