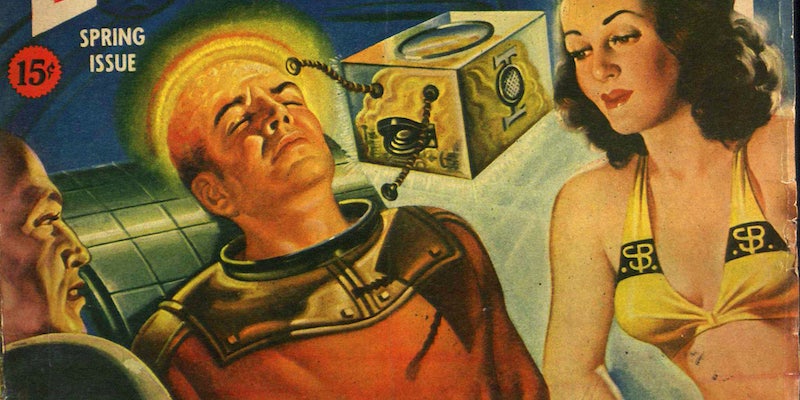 Community members say a petition for "free speech" is really about fighting against diversity.

Dave Truesdale is a man on a mission. A former editor of the Science Fiction Writers Association (SFWA) monthly magazine, Truesdale abhors the recent push for greater diversity within the sci-fi publishing community.

In 2010, he spoke out against “a genre infested with politically correct thinking—at all levels.” Now, he’s taking his complaints directly to the SFWA president in a petition allegedly signed by a string of sci-fi heavies including Harlan Ellison, Mercedes Lackey, and C.J. Cherryh.

But Truesdale is coming up against a growing number of people in the sci-community who support underrepresented members. They’re none too happy about Truesdale’s stunt.

The original version of Truesdale’s email petition, obtained by the Daily Dot, asks members of the SFWA to speak out against the creation of an advisory board that would peer-review the magazine to make sure no potentially harmful elements found their way into print.

“It is our hope hope others will add their names to this call for SFWA President Steven Gould to kill any proposed advisory board or any other method designed to censor or infringe on any SFWA member their First Amendment right to freedom of speech in the pages of the SFWA Bulletin,” the petition reads.

The problem is that what Truesdale masks as a “free speech” issue is actually about discrimination. The potential advisory board is a response to last year’s explosion within the sci-fi blogosphere over sexism in the SFWA Bulletin, which resulted in the resignation of its editor. Issue #200, in particular, featured a nostalgic look from writer Mike Resnick and editor Barry Malzberg at the “Literary Ladies” they had loved. The piece had much more to do with how nice such “ladies” were to look at, rather than how talented and innovative they were in their chosen field.

The incident was one of the most incendiary in the community’s ongoing conflicts over the marginalization of women and writers of color within the speculative publishing industry. In addition to fostering an “old-boy network” of acclaimed sci-fi writers that has existed for years, it’s led to the more recent debate over whether it’s appropriate for women to self-promote their eligible work during the nominations period for the Hugo Awards. It’s also created a widespread, increasing gender gap in titles that receive attention from reviewers, and allowed at least one male reader within the community to glibly go two years without reading works by any female writers.

In the first version of the petition, both Malzberg and Resnick appear as prominent signatories, lending their weight to a campaign that directly criticizes the fallout over the Bulletin’s Issue #200, which included a cover of a scantily clad woman in freezing weather for no particular reason that anyone could see.

An updated version of the email and petition is milder, and signed by a much longer list of sci-fi writers (Resnick and Malzberg are further down on the list, for one).  But in the earlier version, as detailed by Natalie Luhrs at Radish Reviews earlier today, Truesdale goes on a rambling edict against “speech police,” “feminists,” and the perceived hypocrisy of a viewing public getting offended by the cover of Issue #200. (Truesdale argues that because gay men like to look at other gay men naked, there’s no way that putting a woman in a bikini in an ice storm is sexist. Color us unconvinced.) The original version is also disingenuous in its summation of the Bulletin controversy, calling it a mere “brouhaha” rather than a pressure point for ongoing tensions within the community. It glosses over Resnick and Malzberg’s article as “innocuous.”

“The search for a new Bulletin editor followed the Summer 2013 resignation (under pressure) of the then (lady) editor (for the use of an “inappropriate” cover among other alleged crimes), and the brouhaha involving two long-time and well respected Bulletin columnists whose use of the words “lady editors,” “beautiful,” and “a few other innocuous descriptive words…”

Among the SFWA members who’ve spoken out about the petition, which appeared to reach the wider community this morning, is acclaimed author Seanan McGuire, who minced no words in her anger over the concept of “lady writers.”

So yeah, as a female member of SFWA, I want to be able to pick up the Bulletin without having my contributions to the genre demeaned.

I want to see “Seanan McGuire and John Scalzi, both writers,” not “Scalzi (writer) and McGuire (lady author).” Because we are BOTH WRITERS.

If you cannot see how the female membership saying “please stop” is not censorship, I’m sorry. I am. But sadly, you’re wrong.

If you cannot see how the PoC membership saying “we exist and want to be represented” is not political correctness, same.

Basically, if you’re willing to take my money and issue me a membership, one of the things you’re going to have to deal with is ME EXISTING.

Adding insult to injury is the consideration that although Truesdale is an acclaimed and award-winning editor, he is not, apparently, currently a member of the SFWA.  In his final reply to Truesdale on the subject of the advisory board, which Truesdale includes in the petition, SFWA president Gould noted as much:

I appreciate the work you did for SFWA back where you used to be a member, but your email is not a question. It’s a polemic which confuses “free speech” with the legitimate needs and aims of an organization’s publications. Not only are we not obligated to pursue your notions of “free speech” but as a 501(c)3 corporation it would be grossly irresponsible of us to put such ahead of the business and goals of the organization.

You may, of course, air your views on this in whatever venues you control. You may even rejoin SFWA and make your points in our member discussion forums or The Forum.”

“SFWA members don’t pay their $90 annual dues to be told what to think or how they should express themselves in the pages of the Bulletin, nor do they want their own thoughts (through their articles or columns) to be deemed “acceptable” or “right thinking,” or adhering to some jumped-up (always subject to change at whim) PC style manual by some hootenanny “advisory board” of boot lickers.”

While this argument may hold weight with some of the signatories, it doesn’t fly with a growing and increasingly diverse science fiction community. Women and other minority groups are banding together to demand greater representation and they’re using their numbers to gain visibility in a culture that has long pushed them to the side.

If anything, Truesdale’s petition may have proven the opposite of what he intended. Without increasing vigilance and advocacy for those who have long gone without a voice, the science fiction publishing community defaults to a rhetoric of exclusion and sexism.

Truesdale himself is an example of this. In 2010, as editor of the review publication, Tangent, Truesdale decided to stop reviewing semi-pro magazines because he felt they were too politically correct. Being labeled as too progressive can hurt careers within the sci-fi publishing industry.

But today, at least, writers and readers of sci-fi have the satisfaction of seeing an increasingly proactive community summarily reject the idea that cultivating a diverse membership is the same as being “politically correct.”