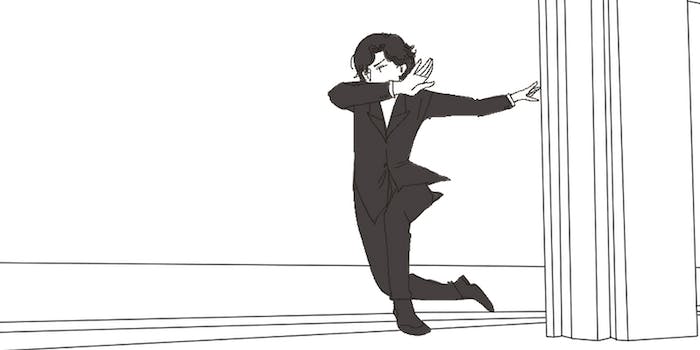 This is the best ‘Sherlock returns’ GIF on the Internet

If this is how the BBC series reunites Holmes and Watson, fans will be very happy.

Okay, everyone go home. This is the best “Sherlock returns” fanart we’ve seen yet.

In case you’ve been living under a rock—or at least off the Internet—you might not be aware that BBC Sherlock series 3 is airing in just 2 short weeks, after a grueling two-year hiatus for fans. Benedict Cumberbatch, Martin Freeman, and the fraught relationship between their characters Sherlock Holmes and John Watson will soon be back in full force.

Fans, particularly Johnlock shippers, have been breathlessly waiting to see the fallout from the previous series, which ended with Sherlock famously faking his own death—just as his predecessor, the Conan Doyle original, did in 1893.

In the original version, Sherlock shows up unexpectedly one night at Watson’s house—in disguise, of course—to announce that he’s back. The Internet has produced multiple scenarios of how the BBC remake might play this dramatic reunion, but this excellent animated GIF by Tumblr/deviantART user hayamiyuu is our hands-down fave:

I know, right? If Sherlock makes an entrance like this, we promise to forgive the show everything, even the Caitlin Moran thing and that Orientalist episode everyone tries to forget actually happened.

The inspiration for hayamiyuu’s art comes from this GIF, which has become something of an Internet meme:

The GIF is part of a particularly snazzy dance sequence from the classic 1953 musical The Band Wagon, starring Fred and Adele Astaire.

But let’s face it, we’re more interested in the duet John and Sherlock will be singing with their hearts come New Year’s Day, when Sherlock finally returns.