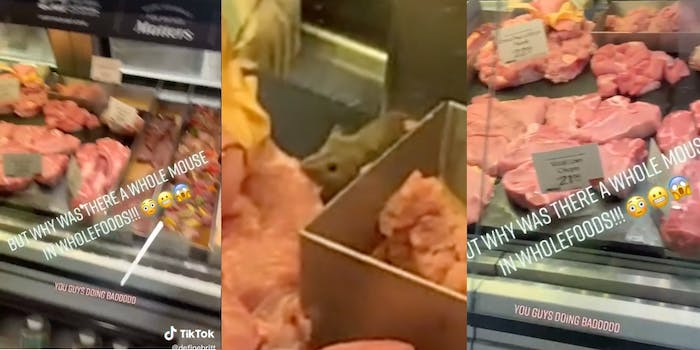 ‘But why is there a mouse?’: TikTok video shows mouse snacking on meat in Whole Foods

The supermarket chain says it 'immediately removed and disposed of all products in the case.'

The appeal of the Disney movie Ratatouille is that it is fiction—a rat doesn’t belong in the kitchen, nor does it belong in a grocery store.

But tell that to this mouse chowing down in the deli section of a Whole Foods. A video shared to TikTok by @DefineBritt shows a mouse eating veal shank in the deli case in a New York City branch of the Bezos-owned grocery chain.

“But why is there a mouse?” the woman filming says in the video.

The woman, identified as Brittany Ellis by ABC7 News, said she and her mother were grocery shopping when they took a break near the deli section to answer a phone call.

“Next thing I know a lady behind us is like, ‘Oh, that’s disgusting,'” she said. “So then that’s when I look closer and I just see a nice little, tiny mouse just chewing away like nothing, and I’m shocked.”

Ellis told ABC7 that her mother didn’t believe her about the Whole Foods mouse, so she started filming the proof.

“She don’t believe me, you know, so that’s what I’m trying to get a worker, but nobody seemed to be attentive,” Ellis told ABC7. “I decided to record it because nobody would believe me, unless there was video proof.”

That video was shared on TikTok, where it has gained 2.5 million views. The incident occurred a week ago at the Columbus Circle location, according to ABC7. Ellis said she let an employee know and that they shared in her disbelief at this mouse so boldly chewing on veal shank.

“Eventually, I first tried to hit up two associates that were like in the produce section because the butchers been busy when they didn’t respond,” she said. “We eventually waited for the butcher to let him know. He thought we were going (to) purchase meat at first, I was like no, I don’t think you want to put your hand back in there because there’s a mouse that could bite you or you know, health reasons I don’t know what it could do. It’s busy eating, it might think your food.”

Concern for her own mother, who had been grocery shopping at Whole Foods the week before, as well as other customers, caused worry for Ellis, she told the news outlet.

“We take this situation very seriously,” Whole Foods told the Daily Dot in a statement. “We immediately removed and disposed of all products in the case, performed a deep cleaning, and brought in a third party service for a thorough inspection. The store diligently followed our detailed protocol in response and continues to work closely with our food safety team.”

On TikTok, the video invited some truly odd jokes. Clearly, a Whole Foods mouse has to have some benefit, according to some users.

Another user who claims to have previous working experience at grocery stores wrote that there’s almost always rats in most grocery stores, no matter how high-end they are.

“I worked in grocery for years,” @ritzzzzzzz69 wrote. “Believe me, there’s definitely rats in your local store. ‘High end’ or not. Sometimes they come in the truck palettes.”