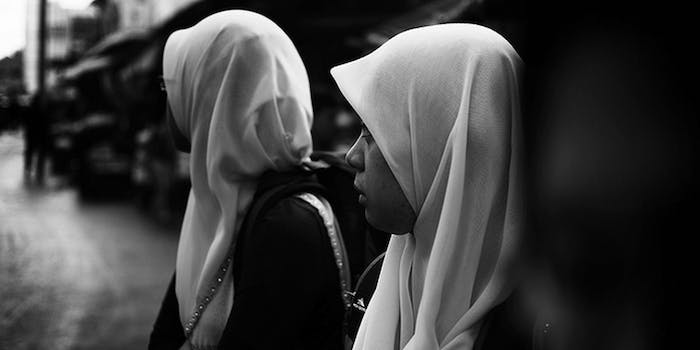 Belief in God is rarely a controversial stance at a religious university. But in recent weeks, one professor has learned that how one expresses and conceives of a belief in God might not only be controversial—it could also be a fireable offense.

Yesterday, Wheaton College of Illinois issued a statement confirming that it had initiated termination-for-cause proceedings regarding Dr. Larycia Hawkins. The Christian university is investigating the political science professor in light of the controversy surrounding a Facebook status she posted in December.

During this most recent Advent season, Dr. Hawkins made a commitment to wearing a hijab in solidarity with Muslim women who she considers to be “sisters.” She wrote about this choice publicly on Facebook and discussed it with her students.

“I stand in religious solidarity with Muslims because they, like me, a Christian, are people of the book,” Dr. Hawkins wrote. “But as I tell my students, theoretical solidarity is not solidarity at all. Thus, beginning tonight, my solidarity has become embodied solidarity.”

Soon, other Christian supporters joined in on the hashtag as well, in solidarity of both Dr. Hawkins’s actions and the Muslim community

You're inspiring @LaryciaHawkins! The way you preach #lovenothate & gracefully stand for #embodiedsolidarity is a beacon of hope!

But not everyone has been supportive of Dr. Hawkins’s decision. Wheaton College’s stated educational purpose “seeks to relate Christian liberal arts education to the needs of contemporary society.” As such, Provost Stanton Jones issued a Notice of Recommendation to Initiate Termination-for-Cause Proceedings to Dr. Hawkins on Monday. The statement issued by the college on Tuesday makes clear that the decision to investigate Dr. Hawkins is directly related to her public statements about the connections between Christianity and Islam.

“Following Dr. Hawkins’ written response on December 17 to questions regarding her theological convictions, the College requested further theological discussion and clarification,” the statement reads, adding that Dr. Hawkins declined to participate in additional dialogue with the college on the matter.

While the initiation of proceedings does mean that Dr. Hawkins’s job is in jeopardy, she has not yet been terminated. Within the next 30 days, there will be a hearing before the Faculty Personnel Committee, at which both Dr. Hawkins and Wheaton officials will have the opportunity to present their arguments. The Committee will then make a recommendation to college president Philip Ryken, who in turn will make his own recommendation to the Board of Trustees. The Board will make the final decision.

Some of Dr. Hawkins’s supporters are continuing to use #embodiedsolidarity as a way of communicating updates and offering additional words of support.

I'll be live-tweeting #LaryciaHawkins' press conf as she speaks on why Wheaton College is firing her. #embodiedsolidarity #ReinstateDocHawk

In light of these developments, Dr. Hawkins has once again turned to Facebook—not to chastise her employer, but to thank those who have offered her encouragement as she stands by her convictions.

The Daily Dot will publish further updates on this story as they become available.

Editors’ Note: This article has been updated to provide additional clarity and context.