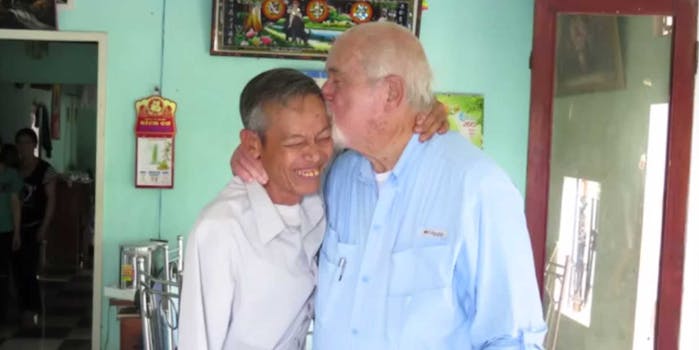 Sam Axelrad reunited with Nguyen Quang Hung, the enemy soldier whose arm he amputated in a life-saving procedure during the Vietnam War.

A reunion between doctor and patient yielded a strange exchange of the spoils of war: The return of an arm amputated 47 years ago.

Sam Axelrad first encountered Nguyen Quang Hung, an enemy soldier, while serving as an Army surgeon in Vietnam in 1966. Hung had been shot in the arm by American soldiers and eventually ended up at a U.S. field hospital.

Axelrad amputated Hung’s arm to save his life. Only, instead of discarding the body part after it was separated, Axelrad’s colleagues wanted to keep the arm as a reminder to them of enemy life saved during war. Axelrad was given the arm as a sort of memento.

The arm was put away in an army-issue bag in Axelrad’s home in Texas, and it was forgotten for almost 50 years.

Wanting to find Hung and return the arm to him, he and his family traveled to Vietnam in 2011. A Vietnamese journalist took interest and reported the story, which helped track down Hung.

They may have once been enemies, but the reunion last weekend between Axelrad and Hung, captured by Axelrad’s son Chris, showed that these two soldiers were thrilled to see each other again.

Hung was happy to have his arm back but thought it was a little bizarre that Axelrad kept it for all these years.

“I can’t believe that an American doctor took my infected arm, got rid of the flesh, dried it, took it home and kept it for more than 40 years,” Hung told Sky News. “I don’t think it’s the kind of keepsake that most people would want to own.”