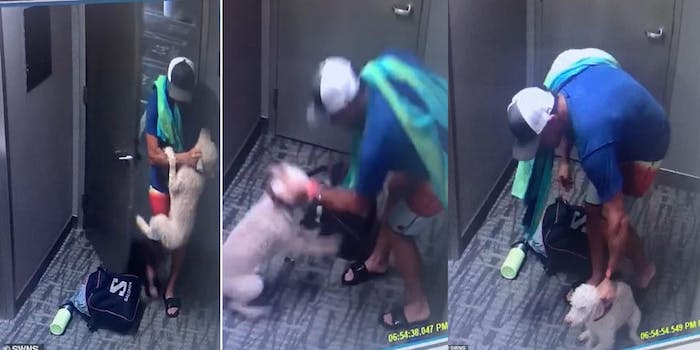 Jeffrey Previte has since rehomed the puppy.

A CEO in California is facing a major backlash online after being caught on camera abusing his 4-month-old puppy.

The footage, obtained by the Daily Mail, shows 46-year-old Jeffrey Previte in the hallway of his condominium building shaking his puppy, Bici, and grabbing its throat.

The CEO of Los Angeles-based environmental consulting firm, Previte was allegedly seen by a concierge who overheard Bici’s cries.

“I heard the dog screaming and when I looked on the camera, I saw him beating the dog,” said the concierge, who asked to remain anonymous.

The concierge then informed Previte over the phone that he would be filing a complaint with the building’s management.

“He became irate… and then he hung up on me,” the concierge said. “He apologized the next day, but I didn’t think it was a sincere apology.”

Previte said he has since rehomed Bici in an apology to TMZ. He said that while he regrets his “unreasonable and unjustifiable action,” the video doesn’t represent the “exceptional life full of nature and affection” that he and Bici spent together.

He further said that he enrolled in an anger management program, is donating to animal rights organizations, and has taken a leave of absence from his job. A recent press release by the company announcing Previte’s promotion to joint-CEO, as noted by Heavy, has since been taken offline.

Previte has also since disabled his social media accounts amid a growing backlash.

The Santa Monica Police Department also announced on Thursday that it would be investigating the matter.

In a statement to the Daily Mail, Previte accused the concierge of attempting to extort him with the footage.

“I think this is very unfortunate that this has come across your desk. I don’t even know exactly what to say but I will say this: [The concierge] called me the evening of this interaction with my dog and that was at nine o’ clock at night and he attempted to extort money from me so that he wouldn’t report it to the building,” Previte claimed.

Previte followed up by arguing that “there’s nothing illegal” about what he did.

The concierge stated that Previte has lived in the building for around five years but is rarely there.

“He dates strange women that come in and out,’ the concierge added. “He wears a Make America Great Again hat and he rides bikes.”