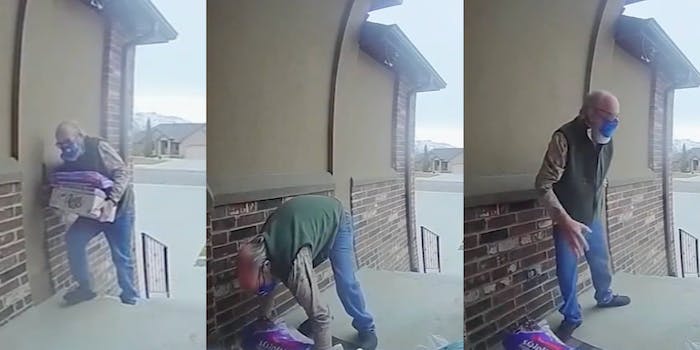 ‘This is not a heartwarming story’: Veteran delivery man goes viral for struggling up steps

Larry recently suffered a stroke and took on the job to pay for home repairs.

People online are crowdfunding to help out a senior citizen war veteran who recently went viral while working as a delivery driver.

The driver, who is only identified as Larry in reports, was delivering groceries to Jennifer Weiss’ house in Utah. Larry was caught on Weiss’ doorbell camera struggling up the steps to get to her front porch.

“It made me kind of feel guilty, to have someone else deliver stuff, just because I didn’t want to go to the store,” Weiss told ABC 4.

Weiss told the outlet that she wanted to find out more about him: “Who he was and what his situation was, why he was doing deliveries, if he was going to continue doing deliveries when snow starts falling when stairs and driveways are icy.”

She found Larry online, posted his Venmo information, and donations from people poured in.

Larry recently suffered a stroke and took on the job to pay for home repairs.

“I had a stroke in June, so I was just making some extra money because our swamp cooler blew off our roof, we have a big hole, I got it taped up, needed some extra money to fix that,” Larry told ABC 4.

The story received mixed reactions after being posted to Twitter by several different news outlets. Some called it a “feel-good” and “positive” story. Others began questioning why a senior citizen has to work to literally keep a roof over his head.

“Here in America, a veteran who recently had a stroke can’t receive enough assistance to keep a proper roof over his head. This makes me sick,” one wrote in response.

This is not the first story seemingly intended to be “heartwarming” to garner attention for being anything but. Derlin Newey went viral on TikTok back in September for working as a pizza delivery man at 89 years old. He took on the job because could not afford his bills with Social Security alone, and people online similarly crowdfunded for him. Twitter users also similarly pointed to the story as proof of a broken system as senior citizens, like Larry and Newey, are not adequately supported by the U.S. government and instead have to rely on personal kindness from strangers to get by.