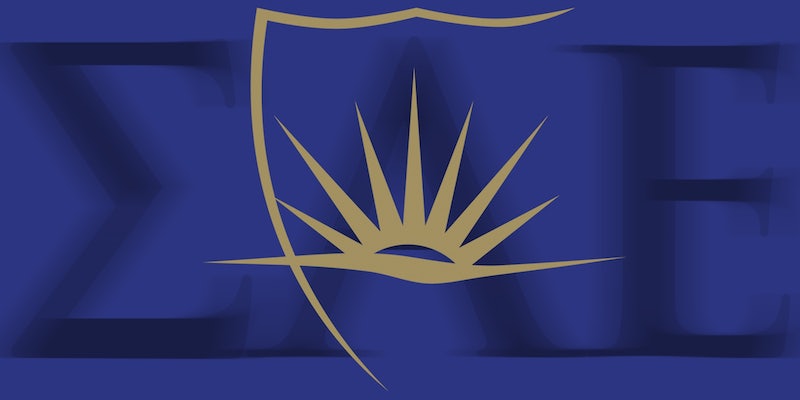 The fraternity brothers allegedly recorded the video on their way to a date party.

The University of Oklahoma chapter of Sigma Alpha Epsilon (SAE) has been shut down after a video surfaced online showing frat members singing a racist chant.

Racism is alive at The University of Oklahoma. @President_Boren pic.twitter.com/eAvnPD8jxA

At least one of the men’s faces can be seen in the video, which depicts members chanting “there will never be a n**** in SAE” and “You can hang them from a tree, but they’ll never sign with me.”

According to KFOR, the video was allegedly filmed Saturday night on a charter bus while the brothers were on their way to a date party in honor of SAE’s Founder’s Day. The Unheard Twitter account says that the men in the video are University of Oklahoma students, although that has yet to be verified by university officials.

The racist video quickly spread across the Internet, leading to widespread condemnation of SAE. The hashtag #SAEhatesme quickly trended on Twitter, where it was still among the top U.S. trends on Monday morning, a day later.

Many people used this opportunity to highlight the culture of racism that persists in America’s fraternities. As they pointed out, the chant wasn’t a lone person saying something racist on camera; it resembled a synchronized, rehearsed song, suggesting the fraternity brothers had practiced it before.

All I know is that #SAE chant looked real … traditional.

On #SAE – remember these young white men are our future lawyers, politicians, business owners… And they are the sons of our current ones.

Boren responded to the video quickly himself, clearly appalled at what he saw. He promised that whoever was responsible, if they were indeed University of Oklahoma students, would be punished.

If the video is indeed of OU students, this behavior will not be tolerated and is contrary to all of our values. We are investigating. – DBo

The national chapter of SAE quickly released a statement condemning the video and its message. It has already closed down its University of Oklahoma chapter and suspended all of those members.

I know I speak for all when I say I'm disgusted and shocked by the video involving our @sae1856 chapter at Uof OK. They will be dealt with.

Sigma Alpha Epsilon is aware of the video and is both shocked and appalled at what we have seen. (Cont)

Those types of behaviors are not consistent with our values whatsoever. (Cont)

We are investigating the details and will sanction those who are responsible.

SAE released a longer statement on its website, which got so much traffic that it crashed the site’s servers. SAE pledged that any members of the fraternity who were responsible would “have their membership privileges revoked permanently.”

“I was not only shocked and disappointed but disgusted by the outright display of racism displayed in the video,” Brad Cohen, SAE’s national president, said in the statement. He continued:

“SAE is a diverse organization, and we have zero tolerance for racism or any bad behavior. When we learned about this incident, I called an immediate board meeting, and we determined with no mental reservation whatsoever that this chapter needed to be closed immediately. I am proud of my fellow board members because we mean what we say.”

The racist frat, SAE, at Oklahoma University has police protection tonight as they move out of their frat house. America.

Early Monday morning, President Boren announced that the university was ending its relationship with the fraternity.

"Effective immediately, all ties between the university and SAE chapter will be severed." -President Boren

Tension is already bubbling over from the Internet to the real world. While the suspended SAE members moved out of their house, someone vandalized the building.

As all eyes are on the University of Oklahoma, Oklahoma State University’s student paper the O’Colly is reporting that a confederate flag is visible from a window of its SAE chapter’s house.

Update 7:47am, March 9: Added a comment from President Boren.