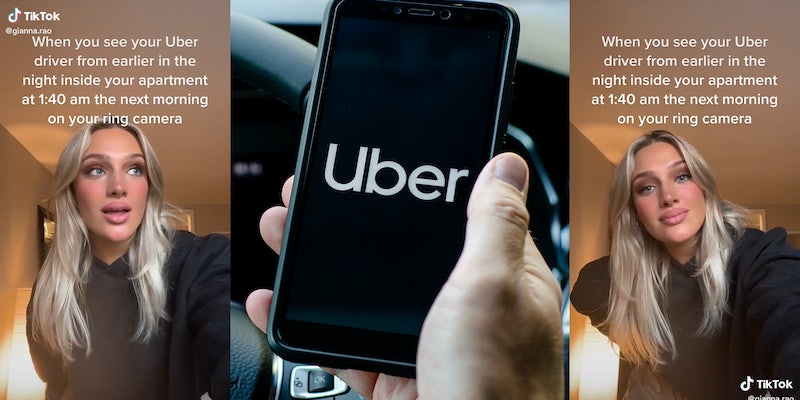 'I always go a different direction from my actual unit and loop around when they drop me off.'

A woman says her Uber driver broke into her home and showed footage of him in her apartment.

In a TikTok posted on Oct. 8, Gigi (@gigirao) says she saw her Uber driver “from earlier in the night” inside her apartment at 1:40am on Ring camera footage.

“Im still in shock,” Gigi wrote in the video’s caption. “Stay safe.” She also posted Ring camera footage of a man she says is her Uber driver.

In a follow-up TikTok, Gigi says the driver dropped her and her boyfriend off around an hour before he broke into her apartment. When she checked her Ring camera footage in the morning, she says she saw footage of the man leaving her apartment—not him entering.

“I don’t know what his intentions were if my door wasn’t locked in my room,” Gigi says. “He didn’t steal anything.”

Gigi says that a screen to the outside in her living room was cut open and dirt had been tracked into her apartment; she assumes he entered that way and knew it was her apartment because he saw her lights turn on when she arrived home. The TikToker also says she filed a police report and contacted Uber but that Uber hasn’t gotten back to her about their investigation of the incident.

“Everyone be safe because you never know what could happen,” Gigi says. “The ride seemed totally normal.”

Commenters on Gigi’s viral video expressed how scared they would be if they were in her situation.

“This is HORRIFYING,” @feliciapaigexo commented. “So glad you’re safe!”

Others shared experiences with Uber drivers that they found off-putting and gave Gigi safety advice for using ride sharing apps.

“I got an Uber when I was 16. My grandma got an Uber back to my home a year later and the man remembered my name and the fact that I lived there,” @blickwave3 wrote.

“I always go a different direction from my actual unit and loop around when they drop me off because of this exact fear,” @lil_shayster commented.

“This is why I don’t list my actual apartment number when I use Uber or Lyft,” @twenty5thousand wrote.

Update 2:50pm CT, Oct. 25: In an email to the Daily Dot, a spokesperson from Uber said that the driver has been “banned from the Uber app.”“This driver’s actions are unacceptable,” the spokesperson told the Daily Dot. “We are standing ready to help law enforcement in their investigation.”

The Daily Dot has reached out to Gigi via TikTok comment as well as to the Boston Police Department via email.