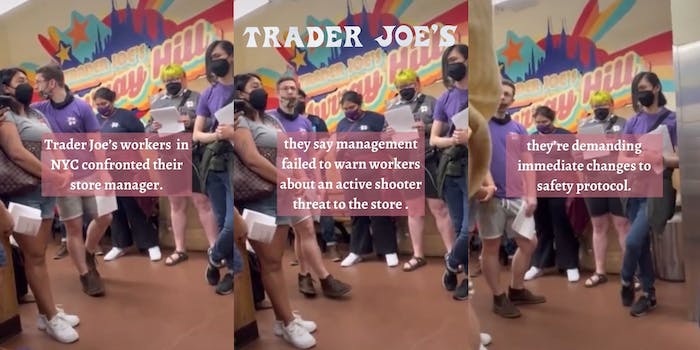 'It's management's responsibility to protect their workers, not just their profits.'

Trader Joe’s workers in New York organized a meeting demanding better safety protocols after management allegedly failed to inform them about a credible threat, according to a video circulating on social media.

The two-minute recording was shared by the More Perfect Union’s Twitter (@MorePerfectUS) and TikTok accounts, and shows a number of workers at the Murray Hill location confronting their store captain out on the floor and reading a prepared speech with their frustrations and demands.

“During the events of last week, we witnessed the failure of management to communicate necessary and crucial information to the crew, and many of us feared for our safety,” a written copy of the speech reads. “The failure to communicate demonstrated management’s clear predisposition to prioritize profits over the safety, mental health, and wellbeing of our crew members.”

According to More Perfect Union, a Trader Joe’s employee threatened to shoot up the store last week, prompting the location to bring in security guards and close two hours early. However, even employees who were working at the time say they were kept in the dark about why these things were happening until the following day.

As a result, the team made a list of demands for better safety protocols, including a “reformed Safety Team in which a majority of members are democratically elected by the Crew” and a Safety Playbook created by management with transparent guidelines for handling threats and other emergency situations.

“As crew members, we expect to work in conditions in which our safety can be guaranteed,” the speech continued. “Our demands are reasonable. What we’re asking for is very fair, and it comes from a place of wanting the best both for our crew members and our valued customers and the community we serve.”

The action prompted solidarity from those pushing for increased workers’ rights in both New York and around the United States.

A source told More Perfect Union management has thus far been dismissive of their requests, allegedly noting they already have a safety team.

All of this is happening amidst a current push for a Massachusetts Trader Joe’s to become the first unionized store in the franchise.

The Daily Dot has reached out to Trader Joe’s for comment.