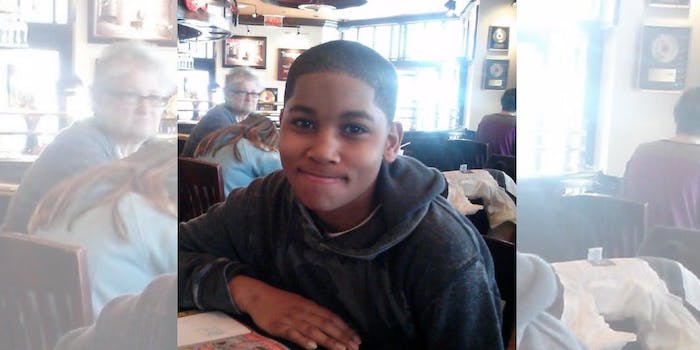 ‘I couldn’t hug my son enough after hearing this and thinking of #TamirRice parents’: Twitter demands justice after DOJ ruling

Many on social media are reacting to the recent ruling by the Department of Justice (DOJ) that found insufficient evidence to charge the two Cleveland officers who shot and killed 12-year-old Tamir Rice.

According to a release, federal prosecutors from both the Civil Rights Division and the U.S. Attorney’s Office for the Northern District of Ohio ruled Tuesday that the two Cleveland officers who shot and killed Rice in 2014 did not obstruct justice and Rice’s constitutional rights were not violated, according to reporting by CNN.

Rice, 12, was shot and killed at Cudell Recreation Center in Cleveland on Nov. 22, 2014 by then-police officer Timothy Loehmann after police mistook his toy airsoft gun for a real firearm.

Many on social media are reacting to this recent ruling, with Twitter user @TamiSeattle calling the decision to close the case an “abomination.”

“I couldn’t hug my son enough after hearing this and thinking of #TamirRice parents,” the user wrote.

“Tamir Rice deserved a full and happy life. Justice was the least we could do for him, and our government couldn’t even do that,” another user wrote.
Others also compared the ruling to recent news about the Nashville bomber.

“Media demonized Tamir Rice for hold a toy in a park but won’t call a white suicide bomber what he is,” tweeted human rights lawyer and Democratic congressional nominee Qasim Rashid.

Politicians alike were saddened by the ruling, including Representative-elect Cori Bush (D-Mo.), who tweeted that DOJ “cannot be called the Justice Department if it cannot bring about justice for the murder of 12-year-old Tamir Rice.”

“In Tamir’s honor, we say to every Black child: we love you. And we will never stop fighting to protect you,” Bush stated.

“We must put an end to the two systems of justice in this country,” tweeted Rep. Barbara Lee (D-Calif.), who reacted to the news on social media Wednesday morning.

“Tamir Rice should be alive today and there should be justice for his family,” Lee wrote.