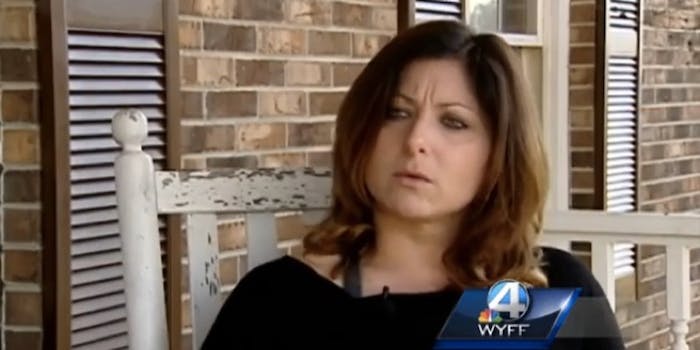 Teacher forced to resign after student leaked her nude photos

And she has a message for the thief.

A South Carolina high school teacher has resigned after a student stole her phone and leaked her private nude photos to classmates and the Internet.

On Feb. 19, Union County High School teacher Leigh Anne Arthur left her classroom to patrol the halls. A 16-year-old male student took the opportunity to snatch Arthur’s phone from her desk and go through her photos, discovering nude pics that Arthur said were intended for her husband.

The teen took photos of the private pictures with his own phone, then texted it to friends and posted it on social media, interim Union County School District Superintendent David Eubanks told local news station WYFF4. According to Arthur, the student  “turned around and told me your day of reckoning is coming,”

The next day, Arthur—who’d been teaching for 13 years—was given the option to resign or go through the dismissal process. Although the student seemingly breached her privacy and exposed her personal photos, the district said she’s to blame for leaving her phone out and unlocked.

“I think we have a right to privacy, but when we take inappropriate information or pictures, we had best make sure it remains private,” Eubanks said.

Speaking of privacy, Arthur’s was definitely violated, said Nicholas Weaver, a researcher on networking and security at UC Berkeley. “The student, without a doubt, violated the teacher’s privacy,” Weaver told the Daily Dot via email. “The phone was not in public view, and the student IMO [in my opinion] committed a serious theft.”

While he does not think Arthur was at fault, Weaver stressed how important it is to keep your electronics safe. “This is exactly why Apple goes through great efforts to both encourage PINs/passcodes (the phone nags pretty heavy on setup if you don’t set one) and use the fingerprint reader to limit the burden.”

He recommended iPhone users set up “a good PIN/Passcode and the fingerprint reader, since for theft like this it provides great protection while providing a lot of convenience (as you don’t have to input your PIN all the time).” And on Android devices, he added, “at minimum set a passcode/pin/pattern lock.”

Weaver said this local South Carolina case directly relates to the larger security battle raging between Apple and the FBI. “What Apple wants to be able to do is make sure that someone doesn’t sneak up behind you, club you over your head, and take all the data on your phone, which really is ‘everything in your life in one handy place.'” Weaver said. “[Including] those nude photos you took for your significant other.”

Eubanks told WYFF4 that Union County Sheriffs are investigating, and they’ll decide what consequences the phone thief will face. Arthur said that according to district policy, the student should be expelled, but there has so far been no mention of any sanctions from the school or the district. According to WSPA, Arthur, on the other hand, could find herself charged with “contributing to the delinquency of a minor.”