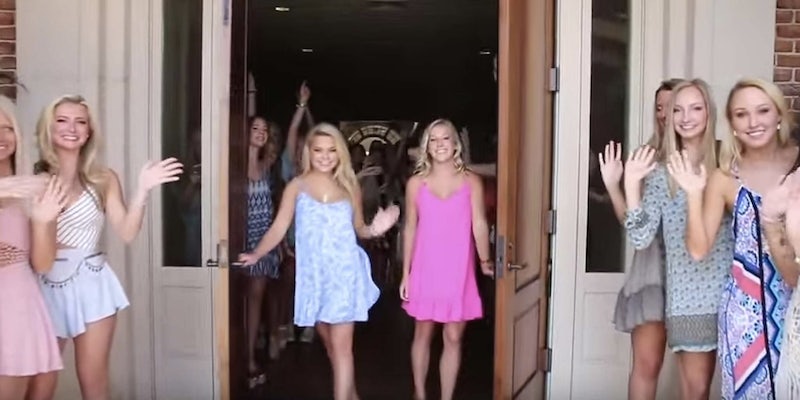 Sorority called out for lack of diversity, academic substance.

In a scene reminiscent of Legally Blonde, a sorority recruitment video beckons us into its bleached-blonde, white-skinned universe and presents it as a place full of beauty and void of substance. But now that sorority is distancing itself from the video after an online backlash.

The University of Alabama’s Alpha Phi chapter presumably wanted prospective sorority members to think its members are the coolest, prettiest, most sisterly girls on campus. To get the message across, the sorority created the video below for its upcoming bid day.

It quickly received a swath of negative attention, prompting the chapter to take down the video, and make its Facebook, Instagram, and Twitter accounts all private. But before it was taken down, the video was reposted by others so that this tampon-commercial-on-steroids could live on.

A university press release stated that some 2,400 female students signed up to get into one of Alabama’s sororities. And they said it was their most diverse group yet.

“Of the total number of women who accepted bids, 214 were minorities, a number that increased by nearly 13 percent,” the release states. “And, the number of African American students who received bids increased by 19 percent, to 25.”

Hardly a banner day for diversity. But the school seems pretty psyched about it.