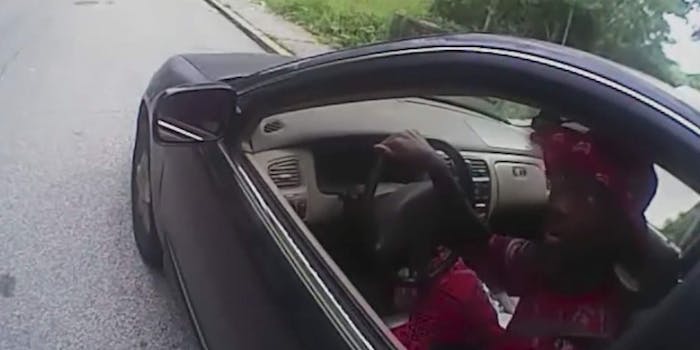 Shortly after a grand jury indicted University of Cincinnati police officer Ray Tensing for the murder of Samuel DuBose during a traffic stop, body camera footage of the incident emerged online on Wednesday.

“This is without question a murder,” Hamilton County Prosecutor Joe Deters said about the incident. “It was a senseless, asinine shooting.”

DuBose, 43, was pulled over for the lack of a front license plate on his car. He had it in his glove compartment, he explained to the officer, and did have a plate on the back of the car. He was unarmed.

The officer examined what appears to be an unopened bottle of gin on the floor of DuBose’s car and asked DuBose to produce his driver’s license. When Tensing asks if DuBose’s driver license is suspended, the officer attempts to open the car door. DuBuose pulls back.

It appears the car starts to pull away and, quickly, the officer pulls out a gun and shoots DuBose in the head. The car crashes down the street.

Tensing claimed he was being dragged by the vehicle when he fired on it but prosecutor Deters disputes that, saying the camera footage showed Tensing misled investigators.

“I don’t think a university should be in the policing business,” Deters said.

Before the release of the footage, Cincinnati Police Chief Jeffrey Blackwell said the video was “not good.”

“It’s ridiculous that this happened,” Deters continued. “[DuBose] didn’t do anything violent toward this officer, he wasn’t dragging him. And [Tensing] pulled out his gun and intentionally shot him in the head.”

Update 4:30pm CT, July 29: Members of the Black Lives Matter plant to hold a rally in response to DuBose’s death, reports WCPO Cincinnati. The rally will begin at 6:30pm ET outside the Hamilton County Courthouse.