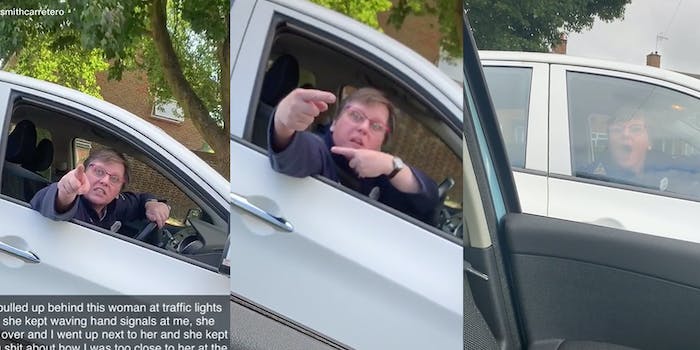 She claims he is going to give her the coronavirus.

A TikToker documented a road rage incident involving himself and a “Karen” in which she threatened to call the police on him for not keeping two meters distance, despite both of them being in their own vehicles.

The first of several videos featuring the incident has been viewed over 4 million times on TikTok.

The first video, which was posted by Owen Smith, shows the woman yelling and pointing at Smith as she gives him the middle finger and threatens to contact authorities.

“So I pulled up behind this woman at traffic lights and she kept waving hand signals at me,” he explained in a text caption added onto the video. He further explained that after both drivers pulled over to address the issue, the woman got upset with him for being “too close” to her vehicle, saying that his car’s proximity may cause her to contract coronavirus.

“You’re supposed to keep two meters apart because the virus is going on at the moment,” she says in the video after Smith asks why she is going to call the police. He interjects, saying, “I’m in a car.”

“It doesn’t matter. You haven’t got my problem. So go now, before I get my phone and call the police,” she replies.

The two drivers had another run-in and near-collision weeks after the original confrontation.

In a later video, Smith recounts what took place during the second conflict with the same Karen.

He says he was driving and approaching a nearby roundabout when the near-collision occurred. He didn’t see her and didn’t even notice it was the same woman until moments later.

He says that once he realized it was her, she began giving him the middle finger again. He alleges that she was not paying attention to the road and began swerving in and out of lanes before he backed off and started to record.

“I pull up next to her, and I start recording her, and she acts like she’s scared,” he says.

Smith hasn’t offered an update on whether driving Karen contacted authorities or officially filed reports on him.

One user asked him if he knows anything about the woman or why she may be acting aggressively toward him. “No. So should maybe give her a little bit more respect? Yes,” they wrote.

“Maybe she should give me some respect,” Smith said in response. “She doesn’t know me. She’s screaming at me. Why do I have to give her some respect if she’s not giving me respect.”