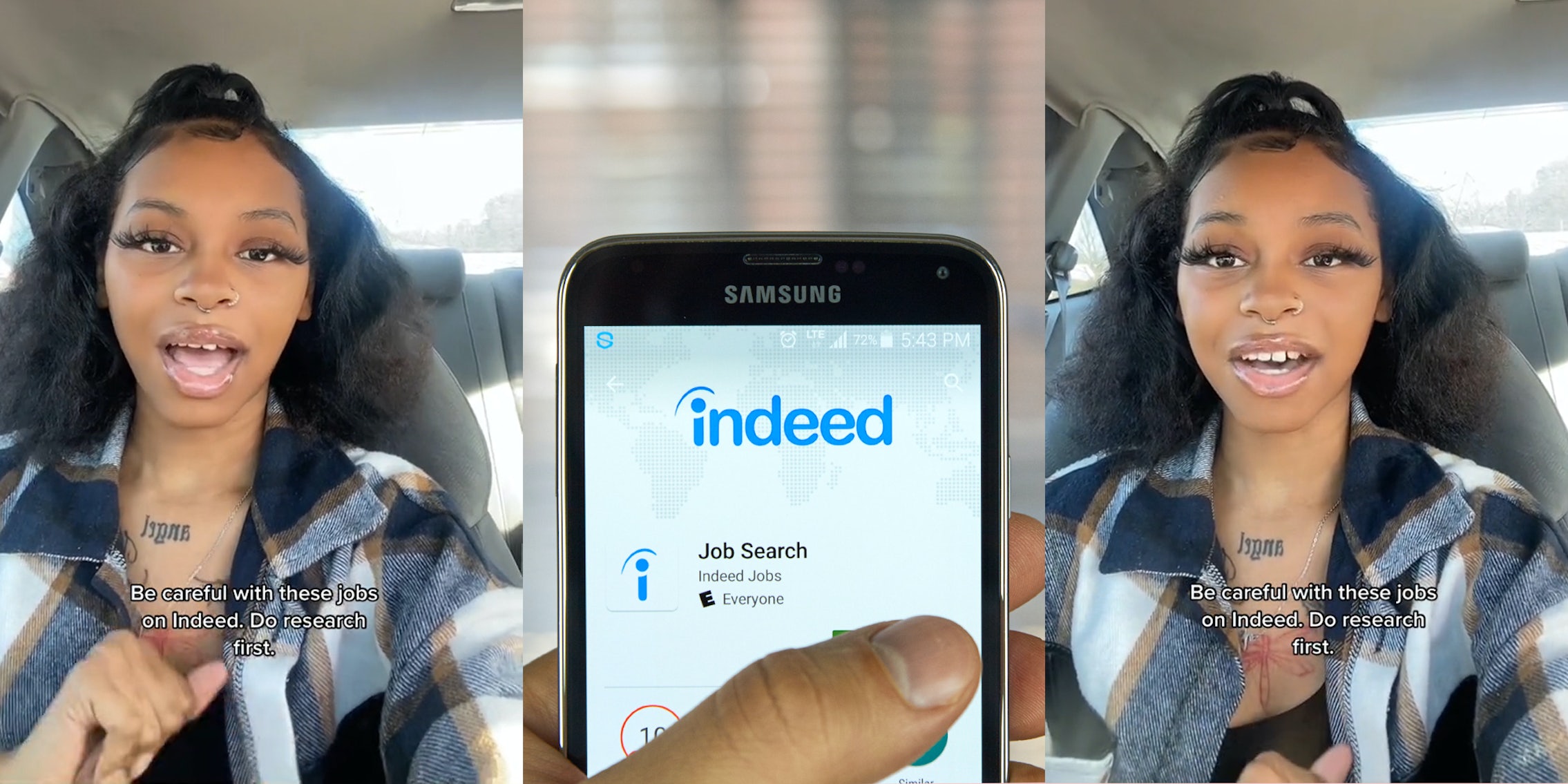 ‘Be careful with these jobs on Indeed. Do research first’: Worker shares ‘red flags’ of job she quit after 4 days

'Some of them be leaving out information for a reason.'

A user on TikTok has sparked discussion after sharing the ‘red flags’ she ignored before getting a job that she quit after 4 days.

In a video with over 28,000 views, TikTok user Mani (@maninotamari) recounts her experience, giving viewers a warning to be careful about online job listings in the process.

“Be careful with these jobs on Indeed,” she says in the text overlaying the video. “Do research first.”

@maninotamari Not too upset bc this was a learning lesson for me, just hoping I can find something for me soon #foryou #indeed #jobs ♬ original sound – Fun girl🦋

Over the course of the video, she lays out the various red flags that she observed during the interview and hiring process.

The first red flag, she says, was that she was hired almost immediately.

“I got the job hours after my interview,” she recalls.

The second red flag, she continues, was the vagueness of the interview.

“I was under the impression that I’d be doing office work and over-the-phone stuff with different companies…I’d just be marketing to them, and I’d be able to receive commission for that,” she explains. “That wasn’t the case.”

The third red flag came after she received the job in December. Her orientation for the job, she says, was in January—however, the company sent no reminders or follow-up information about the orientation, forcing Mani to reach out to the company herself to clarify simple details such as when the orientation was supposed to begin.

“I didn’t receive a reminder until the morning of my orientation,” she claims.

Lastly, when Mani got to her orientation, the company had changed buildings and had not informed her.

“How I was supposed to know that without looking it up is beyond me,” she says. “It wasn’t even in the text I got that morning!”

In recounting her further experience, she shares more issues with the job.

For example, she says the company misrepresented the nature of the work. While the interview made it seem that she would be working in an office and could choose if she worked mornings or nights, the company actually decided her schedule for her; as for the job itself, it involved meeting at an office before going into stores like Target and Sam’s Club to sell phone plans to customers entering the store.

Furthermore, evening workers also had to go to the office in the morning. The TikToker says she lives 40 minutes away and that employees were responsible for all travel. All of these elements together inspired Mani to leave the job.

“Moral of the story is, please be extra careful with these companies on Indeed. Some of them be leaving out information for a reason,” Mani concludes.

In the comment section, users shared their thoughts on Mani’s situation, with many recounting their own, similar experiences.

“I was in a similar situation, the way the company worded their description made it seem like I’ll be in the office BUT nope we were outside pitching,” wrote one user.

“I had a similar situation but they had me outside with a clipboard asking for donations,” recounted another. “I quit the first day.”

“I did this in November. I was there 3 days. And I was hired the same day as well,” claimed a third. “I applied for 1 thing and they had me doing the opposite.”

“Something similar happened to me last year but I realized before I ever started and the guy literally got mad at me,” alleged a further user.

Jobs in ‘marketing’ seem particularly susceptible to this form of deception, commenters claimed.

“…The marketing jobs are always scams,” summarized a user. “I learned that early, smh.”

“…I’m glad I trusted [my gut] and left before I got deeper,” she detailed in a comment.

The Daily Dot reached out to Mani via TikTok comment.