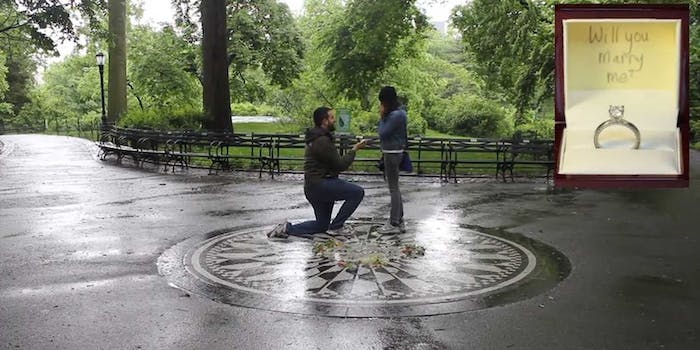 NYC redditors team up for a Beatles-themed marriage proposal

Of course you'd brave the elements for the perfect marriage proposal. But what if it were someone else's?

Of course you’d brave the elements for the perfect marriage proposal. But what if it were someone else’s?

Gabe McGuinness and his girlfriend, Laura, were Beatles fans visiting New York City for the first time. While Laura may have been going with no other expectations than experiencing the Big Apple, Gabe had other plans.

He was going to propose to Laura at the most appropriate of spots for Fab Four aficionados: Strawberry Fields. The location in Central Park is a memorial to John Lennon, who was killed in New York City in 1980. It is named after the Beatles song “Strawberry Fields Forever.”

To make the proposal extra special, he turned to the power of Reddit before his trip.

“What does NYC think of the plan?” he posted on May 19 to the subreddit r/AskNYC, using the throwaway account nycproposal.

“Your idea about going there early is a good, because after 10am or so, the many tourists come there, and that place is very crowded, and it will nearly impossible to get a nice picture with just the two of you,” redditor enderminh replied.

“I don’t recommend leaving your tripod by itself on a timer (especially now that you have advertised this). I would ask Redditors to volunteer to capture your moment on their own equipment. In fact, I have a DSLR/tripod as well and can volunteer—asking nothing in return. PM me.”

On a rainy May 25, McGuinness and his future bride traveled to the Strawberry Fields memorial, directly within range of the camera set up by enderminh. As enderminh himself snapped a few photographs of the couple, McGuinness “accidentally” dropped a Post-It note on the ground, which Laura picked up and read.

“Laura, you still give me butterflies! I can’t imagine spending my life with anyone else…” the note read.

McGuinness then got down on one knee and handed the ring to Laura, who readily accepted.

On June 8, McGuinness updated his fellow redditors on what had transpired on that cold, rainy morning in Central Park.

“I just wanted to thank /r/AskNYC and /u/enderminh in particular. He scouted the location for me and woke up early on a Saturday to take his own equipment out in the rain to help a total stranger! He deserves much karma!”