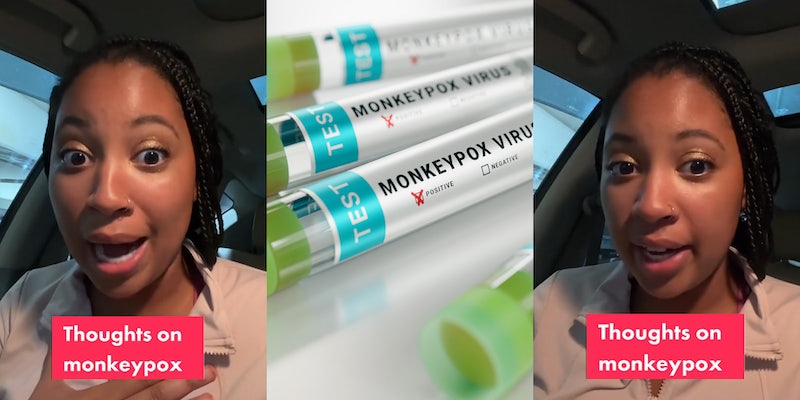 ‘We’re scared and we don’t want to do it’: Nurse says healthcare workers aren’t willing to deal with monkeypox patients, sparking debate

'Healthcare workers are fed up.'

In a viral TikTok, a nurse spoke about healthcare workers’ resistance to dealing with monkeypox patients, sparking a discussion about the well-being of nurses on the heels of the COVID-19 pandemic.

The viral video, which has over 136,800 views, was posted earlier in the week by Chenedy (@nurse.chen), a TikToker with over 63,300 followers who makes videos about her experience as an intensive care unit travel nurse. The nurse is responding to a video from another nurse, who says she does not want to go anywhere near monkeypox patients.

“No, you guys don’t understand. As healthcare workers, we are scared of monkeypox, OK. Like, legit terrified. And it’s not the fact that it’s extremely deadly, which it’s not, it’s not extremely deadly. Or the fact that it could ruin your appearance—which it does, it definitely does—and that has a little bit to do with it, I’m not even gonna lie. But one pandemic was enough. It’s enough, it’s OK,” the TikToker says in the video.

“Y’all remember that when we were heroes and then zeros…And now y’all want us to go deal with monkeypox, are y’all for real? And do it gung-ho? No. No. We’re scared and we don’t want to do it,” the TikToker continues in the video.

The TikToker then describes a nightmare she had where she woke up covered in monkeypox welts. She says she woke up angry over having another pandemic.

“Yaaaaaaallllll. Healthcare workers are fed up, im telling you,” the TikToker captioned the video.

The viral TikTok sparked controversy in its comments section over the well-being of nurses during back-to-back viral outbreaks of monkeypox and COVID-19.

“I still have PSTD from Covid. i dont have another pandemic in me,” one user commented.

“Healthcare workers are probably fed up that the population knows how to mitigate the spread but won’t,” another argued.

“I wouldn’t want to either,” a third related.

Monkeypox is a viral disease, a part of the same family of viruses which causes smallpox. The disease is rarely fatal, however, it causes a variety of undesirable flu-like symptoms, as well as a gnarly, itchy rash with blister-like bumps, which sometimes lead to scarring, on the genitals, anus, face, hands, feet, and mouth. The disease is spread primarily through intimate physical contact.

The monkeypox disease has been present in humans since the 1970s, however until 2022, it has historically been present in only a few West African countries. In 2022, an outbreak spread the disease across multiple new countries, including the United States, according to the CDC. In July, the World Health Organization declared the outbreak a global health emergency. On Thursday, the United States declared the outbreak a national health emergency.

Stigma against the monkeypox disease is on the rise, exacerbated by a lack of education for healthcare professionals and a lack of widespread access to the vaccine for the disease—which is already available. The stigma has affected lab technicians, some of whom have reportedly been refusing to draw blood from potential monkeypox patients, according to CNN.

This week, the American Nurses Association called for “swift action and collaboration among federal, state, and local officials to ensure nurses and all health care professionals have the highest level of protection and preparation” to respond to the monkeypox outbreak, coming on the heels of nurse exhaustion from the COVID-19 pandemic. The association requested proper personal protective equipment, vaccinations, and education on protocols for diagnosing and treating the disease, according to a press release.

The Daily Dot reached out to TikToker Chenedy via email for comment.