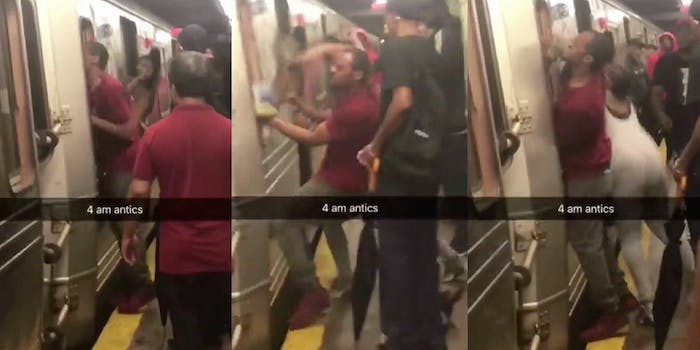 NYPD is still looking for the suspects.

Public transportation in New York City is far from a pleasurable experience. If you’re not stopped by the city’s lack of access for people who use wheelchairs, then the heat, the crowding, and the delays are sure to disgruntle even the most chill of New Yorkers.

Over the weekend, however, one group became subjects of a police search when they assaulted an MTA conductor who passed their local stop because the train started running express.

According to Gothamist, police say that the 62-year-old conductor, who was running the A train at 4:40 a.m. on Saturday, was “pounced” on by three people at the Grant Avenue stop in East New York in Brooklyn. The group yelled at him and attempted to pull him onto the platform through the cabin window by his arm. They also punched him in the face and threw beer cans, police say.

Video of the attack was recorded by a bystander and uploaded to Facebook, then Liveleak.

All three attackers fled and no arrests have been made, Gothamist reported. If arrested and charged with assaulting a transit worker, a Class D felony, the attackers could face up to seven years in prison. The conductor told leaders of the Transit Workers Union Local 100 on Monday people might stop attacking workers if they were publicly identified. Police are currently looking for two of the people involved in the attack, one man and one woman.

Attacks on New York transit workers are reportedly on the rise, with some speculating that it’s related to the delays riders experience, and the subsequent growing frustration they feel. The Transit Workers Union is passing out “Most Wanted” flyers of transit worker assailants, and have added these attackers’ photos to the list.