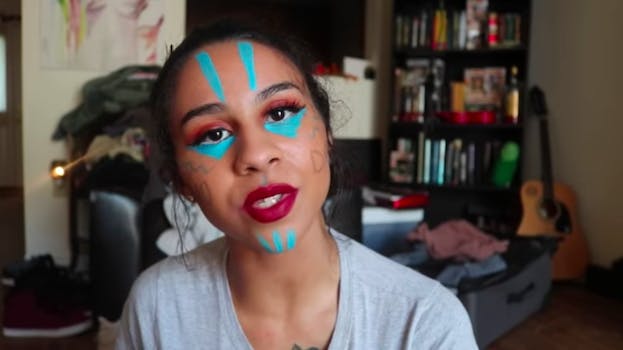 This hilarious makeup tutorial breaks down everything wrong with cultural appropriation

'Native-inspired' is not a good look.

Thanksgiving is upon us. That means festive wreaths, turkeys, and ill-advised native-inspired looks are coming to a YouTube makeup channel near you. But JJ Smith is here to save the day with a step-by-step breakdown of everything that’s wrong with culturally appropriated contouring.

In a hilarious video titled “How to do Thanksgiving makeup that has nothing to do with the 566 federally recognized tribes,” Smith dons turquoise face paint and serves up some steaming hot tea.

Smith, a 21 year-old St. Louis native who is based in Florida, told the Daily Dot the video was inspired by a request from a subscriber who is Sioux. “She messaged me asking if I could do a commentary on Native American ‘warpaint’ looks…but to make it funny so she’d have something to sort of lighten the reality of it.”

The video is peppered with hilariously dark humor, like how to make your eyes look “bigger, like they’re wide with terror. Because colonizers love it when you look afraid.” And Smith encourages her viewers to embrace “subtlety.” “It’s all about your convenience,” she says. “And not the well-being of a traumatized nation of people.”

Smith said she understands that appropriation isn’t always done on purpose or with malice, but that doesn’t mean it shouldn’t be pointed out. “Sometimes, when you’re so immersed in your own world, it is hard to tell what’s appropriation vs. appreciation,” she said. “Which is why I think it’s good to ask. If you fuck up, you apologize and just don’t do it again. It’s that simple. But there are so many ignorant people in this country that have this ‘I’ll do whatever I want’ mindset that they genuinely don’t care how disrespectful they’re being to a culture. It’s gross.”

Most of Smith’s videos are hilarious woke takes on makeup tutorials (like this one on how, of course, women only wear makeup for men). But even though she’s been doing this less than a month, she already has north of 6 million views on Facebook.

“I have nothing against beauty bloggers,” Smith said. “I love makeup tutorials! I like experimenting with colors and techniques. I sort of have this dual personality. There are days where I’m all pink and bubbly and sweet, and days where I wear burgundy because I’m ready to snatch someone’s soul and overthrow mankind.”

Of using humor to address difficult conversations, Smith said, “I just never had it easy growing up and laughing has been one of my saving graces. You can be dirt poor, hungry, abused—there are little moments between that where you’re with someone who makes you laugh, and you feel good for those few seconds.” She added, “Laughing eases the tension, I feel. When you make a joke of it, people get less defensive and it opens the conversation up.”