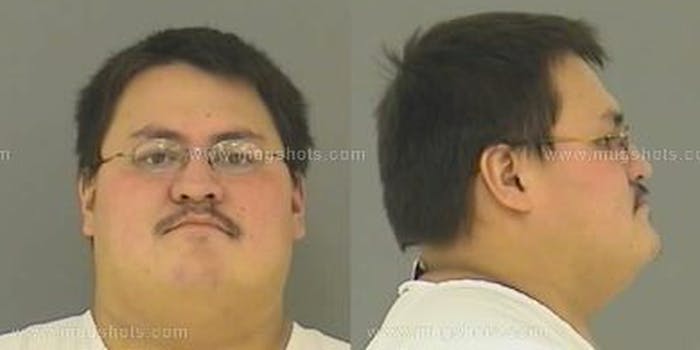 One resident, criticizing the leadership as corrupt, just got five days in jail on an obscure tribal ordinance.

Bryon Scott Farmer, a resident of Great Falls, Mont., is an outspoken critic of what he considers widespread corruption in the governance of the Blackfeet Nation reservation.

Trouble is, around those parts, that’s illegal. Farmer, 33, was jailed for five days before being released Tuesday on $500 bail. He was arrested following comments made on his Facebook page, Blackfeet Against Corruption, that were seen to violate a local ordinance. As the Great Falls Tribune reported:

According to witnesses, Bryon Scott Farmer was arrested on Friday for violating Tribal Ordinance 67. The law protects members of the tribal council from “allegations of threats, slanderous material and misleading information,” according to court documents.

Farmer’s offending comment pertained to a yearly cultural celebration, where he planned to make a bold public statement:

On Saturday, July 13 at North American Indian Days we will show our tribe, Indian Country, America, and the world that the Blackfeet will no longer allow corrupt leaders, illegal actions, politicians that ignore the will of the people, and abuse of our laws and people. We will show all Indians that you CAN take back your reservation when corrupt and incompetent politicians get out of control.

Farmer had come up with the idea of a parade float for the occasion displaying Adolf Hitler alongside tribal councilman and state Sen. Shannon Augare, a frequent target of his ire, who “recently pleaded not guilty to charges of DUI and fleeing a police officer.” Augare was able to evade arrest after being pulled over in May because of the limited jurisdiction of the responding deputy on the Blackfoot reservation.

While perhaps more opulent in his attacks, Farmer is far from the only Blackfoot incensed by recent activity in the tribal government. Last summer, five councilors and two dozen tribal employees were suspended, leaving the tribe with just a few leaders—not enough to guarantee sound or ethical proceedings, Farmer and others have argued.

Even amid the dissenters, Farmer has turned out to be a divisive figure. There is a rival Blackfeet Against Corruption Facebook page subtitled “part deux (Farmer wont boot ya),” which further suggests that Farmer has some strict policies about membership in his group:

This is for the Blackfeet people, descendants, anybody on the rez, neighbors, whoever that has something to say but has been kicked by the circus on the other page. It doesnt have to b negative, it could b something positive

Over on Farmer’s page, members followed news of his arrest and were ultimately hopeful that wider media exposure would result, boosting their anti-corruption cause. Ordinance 67 is apparently such a rarely invoked law that even the police were not sure how to explain it. 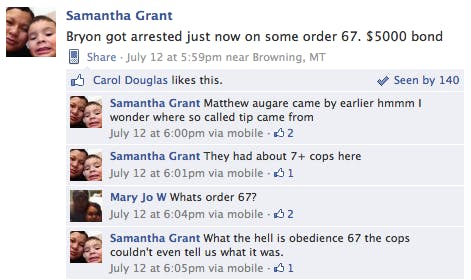 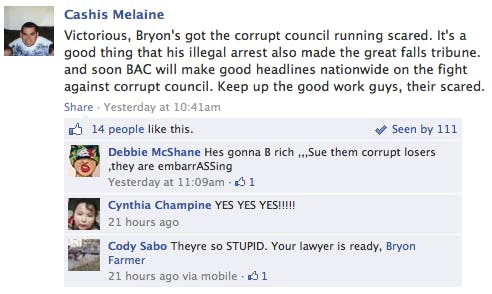 Farmer made a triumphant return to his Facebook page yesterday, thanking his friends for their prayers and support.

Something tells us this isn’t how the tribal council saw this going down. For the moment, it looks as if they’ll need to find a better way of subverting the First Amendment.