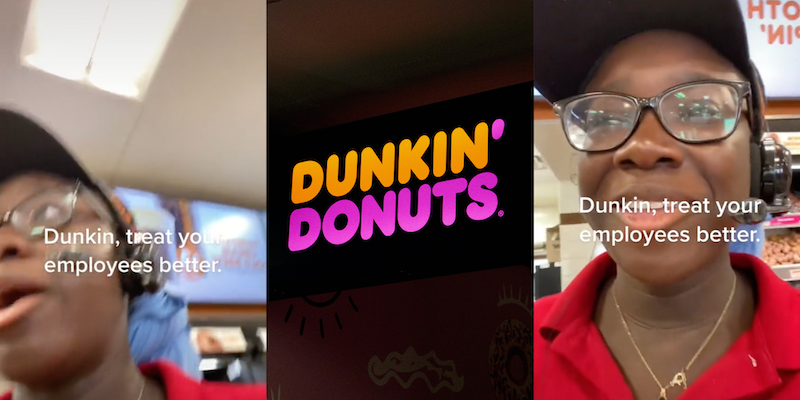 ‘This is just the beginning of bullsh*t that has happened at this store’: Minor quits Dunkin’ Donuts job after she was left to man the store herself

'We kept letting the owners and manager know, but nothing was being done.'

A 17-year-old former Dunkin’ Donuts worker says she quit after being left in the store alone with no closer, detailing alleged “labor law violations” that she experienced while working there for two years as a minor.

In the video posted by TikToker Kelly (@kellymariamm) on Sept. 3, she shows a clip of her crying in Dunkin’ Donuts, saying that she “just quit” her job. Text overlay reads, “Dunkin, treat your employees better.”

“I’m literally 17 years old, and I’m just stuck in the Dunkin by myself,” she says in the clip. “And this is just the beginning of bullshit that has happened at this store.”

In the caption, Kelly elaborates that she was by herself because “the owners didn’t make the schedule correctly and no closers showed up.”

“The girl that was working before had been working for 10 hours straight with no break and had to leave at 5:30 when she was supposed to get off at 4,” the caption continues. “We kept letting the owners and manager know, but nothing was being done so I locked myself in the store and told them this is my last day and when the owner finally showed up all she cared about was me unlocking the doors.”

@kellymariamm @kellymariamm For some more context.. I was completely by myself at Dunkin NEAR A HIGHWAY because the owners didn’t make the schedule correctly and no closers showed up and the girl that was working before had been working for 10 hours straight with no break and had to leave at 5:30 when she was supposed to get off at 4 and we kept letting the owners and manager know, but nothing was being done so I locked myself in the store and told them this is my last day and when the owner finally showed up all she cared about was me unlocking the doors. #boycottdunkin #treatyouremployeesbetter #enoughisenough #thegreatresignation ♬ original sound – kelly 💅🏾

The video has amassed over 958,000 views as of Monday, with commenters sharing their own experiences with Dunkin’ Donuts’ treatment of minor employees.

“Our local Dunkin left my 16 yr old to work with another 16 yr old girl for a 6 hr shift! I found out when she got home. NOPE! & the owners stole tip $,” one commenter wrote.

“I remember working at Dunkin and this happening to me every opening shift! I would be so scared coming in at 5am by myself to open,” another said.

“My son worked at a Dunking when he was 16. They had him 10-4 and no one showed up. I picked him up at 4 and left the store unlocked and open,” a third added.

In a follow-up video posted on Sept. 4, Kelly explains that “an hour after” taking her original video “the owner showed up with a girl from another Dunkin.”

“She told me to unlock the doors, and she kept saying, ‘You were just kidding in the group chat right?’ Because I had said that ‘Blank had left, I’m locking the doors, and this will be my last day,'” Kelly says.

She continues that the manager told her to just “take a break” and that she was just “angry” in an effort to convince Kelly not to quit.

“At the end of my shift, I turned in my keys, and that was that,” Kelly says.

She notes that she started working at Dunkin’ Donuts “during the pandemic” when she was “15 years old,” averaging 35 to 40 hours a week. According to Federal Child Labor Laws, 14 to 15-year-olds are not allowed to work more than 18 hours a week during the school year and cannot work outside the hours of 7 am and 7 pm.

Kelly continues to explain another situation in which the registers were in her name when her manager “went to Miami for four days” because she was the shift leader.

“After my manager came back from Miami, she said ‘Oh, $3,200 is missing.’ And I said, ‘But all the registers were fine when I was counting them,'” Kelly says in the clip. “She proceeded to manipulate me and tell me that ‘All the registers are in your name. This could be way worse for you than for me.’ She proceeded to ask everyone in the store for $200.”

She says that she later found out that the manager “counted the money wrong,” but the owner “refused to give the money back” that the employees had paid.

At the end of the clip, Kelly says that Dunkin’ Donuts would “routinely” mess up her paychecks and push back at availability changes due to school.

“Dunkin is just a terrible place to work at,” she concludes.

@kellymariamm Replying to @kellymariamm @dunkin, treat your employees better. my manager only did that because our owner was threatening her job AS A SINGLE MOTHER. they also took my friends entire paycheck. they took advantage of minors because they thought we wouldn’t speak up … WELL WE ARE #laborlaws #boycottdunkin #thegreatresignation #minorsafety ♬ original sound – kelly 💅🏾

The Daily Dot reached out to Kelly via TikTok comment and to Dunkin’ Donuts via email.